Germany has been very hard hit by hostile Muslim immigration, one measure of which is Berlin and other cities with “no-go zones” which are dangerous areas for non-Muslims to enter.

Bonn was the site of a violent disturbance on Saturday when a few dozen Germans rallied and posted Mohammed cartoons to demonstrate that normal western standards of free speech cannot survive with growing numbers of Muslims and mosques. The Pro NRW party said that it was posting the caricatures as an “election tactic” to raise awareness prior to May 13 voting.

The Bonn confrontation followed similar violence in Solingen on Tuesday where tear gas was used and dozens were arrested.

Below, a Muslim unfriendly was arrested during recent rioting in Germany. 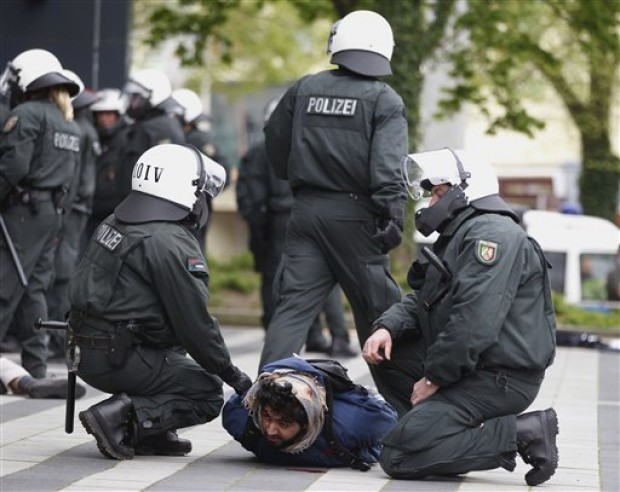 The German press describes the free speech activists as “fringe” as shown repeatedly in the news clip below. This reaction is the well-worn “blame the messenger” strategy. There is no free speech when Islam diversity takes hold, as the French humor magazine Charlie Hebdo learned when its office was firebombed last November prior to an issue with a satirical view of Mohammed. (Video link)

In the video below, police order free speech activists (who are chanting “Deportation! Deportation!”) to pack up and leave (because someone was shooting at officers), at one point saying “This is no game anymore.” As if free speech were a minor non-essential item in a democracy. (Video link)

The trouble in the western city of Bonn started late Saturday when hundreds of Muslims protested against the rally of about 30 supporters of the local far-right party Pro NRW, which has angered Muslims by showing unfavorable cartoons depicting Islam’s Prophet Muhammad. Strict Muslims oppose any depiction of their prophet.

About 110 Salafist protesters were arrested after they started attacking security forces with stones and bottles, police said. Two of the injured police officers were hospitalized with serious wounds after being stabbed.

Most of the protesters who were arrested were released by Sunday, but prosecutors opened criminal investigations against them on suspicion of breach of the peace. A 25-year-old German protester of Turkish origin, who is suspected of having stabbed the two police officers, remained in custody and was investigated on suspicion of attempted homicide, police said.

“This was an explosion of violence as we haven’t witnessed in a long time,” Bonn police chief Ursula Brohl-Sowa said at a news conference Sunday.

About 200 Salafists threw objects toward police after the far-right protesters showed the cartoon depicting Mohammed, she said, according to German news agency dapd.

Similar clashes between Salafists and the Pro NRW party erupted last weekend, leading to the temporary arrest of 81 Salafist protesters. The marginal anti-immigration party has multiplied its public appearances in North-Rhine Westphalia state before state elections there next week.

Germany’s intelligence and security agencies are closely monitoring the Salafists’ actions as the group is increasingly viewed as a threat to security, according to officials.

“Salafism is currently the most dynamic Islamist movement as well in Germany as internationally. Its fanatic followers represent a particular danger for Germany’s security,” Interior Minister Hans-Peter Friedrich told Sunday paper Bild am Sonntag. “The Salafists provide the ideological foundation for those who then turn violent,” he was further quoted as saying.