Zuckerberg Squeeze Eric Cantor Forced To Pour In His Loot 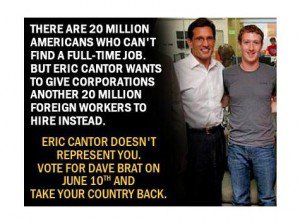 Someone in the Dave Brat campaign knows how to point a gun. The above Internet ad, recently launched against his Primary opponent Eric Cantor (Adelzuck – VA) neatly fuses two key aspects of the 2014 political season Cantor Spends Big While Brat Hammers Immigration Issue by Michael Patrick Leahy Breitbart.com 2 Jun 2014 which supplied the ad also posts the larger picture from which it is drawn. Cantor, Paul Ryan and Kevin McCarthy are literally cuddling with Zuckerberg and Facebook COO Sheryl Sandberg.

As I noted in Cantor, Scared Of Primary, Goes Zuckerberg On Amnesty Mark Zuckerberg’s distinctive contribution goes beyond money to spectacularly dishonest and devious assertions about facts, as seen in his pro Amnesty Ad campaigns – particularly outraging Mickey Kaus in the Ellmers/Roche Primary.  Sheldon Adelson in contrast is pretty straightforward.

in 2012, very little of his spending—less than $250,000 out of $1.5 million—was for media related to his re-election campaign…More than half of the $1 million Cantor has spent since April 1 has been on local media expenditures.

The American Chemistry Council, also recently launched a $300,000 independent expenditure for television ads in support of Cantor. It's rare for the trade association to wade into primary campaigns.

This is a valuable piece of digging by Breitbart illustrating that Cantor is clearly worried – and, alas, the disparity of resources between the Treason Lobby and the Patriots.

Cantor votes steadily for enforcement proposals. Any “Law and Order“ or even “Competent Government” – man really has no alternative.

But he utterly failed (F-) on votes to “Reduce Unnecessary Visas”, did poorly (C) on “Amnesties”. Even worse, he DODGED all votes on the “Anchor Baby Citizenship” question – the Jugular of the transformation of America effort.

It needs to be emphasized: Switzerland has quantitatively a similar immigrant issue to America. It is far less of a political threat because being born there does not make a Baby Swiss. Eric Cantor is in favor of transforming America. He opposes any effective measure to stop it. This is no surprise. His votes are probably the most extreme expressions of his prejudices his district can be fooled into tolerating.

This man deserves no place in the GOP House Leadership.

Cantor and Zuckerberg have too much in common.