Tuesday’s front page of the Los Angeles Times had one of its cloying diversity fables about immigrant and refugee kiddies making their way in confusing America, titled “Their goal: A level field.” 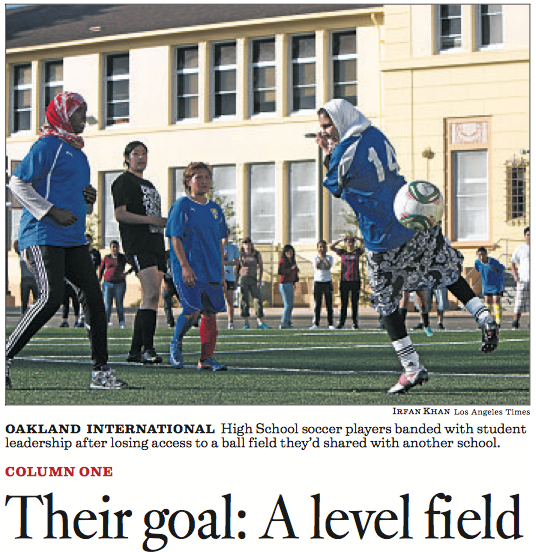 The story concerns how the diverse students at Oakland International High School have taken possession of a baseball diamond and turned it into a soccer field. The narrative is complicated somewhat by the fact that a parent group had raised $400,000 to turn the formerly empty lot into a proper baseball and they didn’t want the outfield messed up by soccer cleats. In 2007 the school district allowed the local group “Field of Dreams” to create and run the diamond.

But the immigrant kids wanted it because soccer defines “what we are,” different from the annoying Americans. They organized with social media, petitions and other lefty-style complaint strategies. Apparently they didn’t learn in school that agreements with a government entity and raising $400,000 to do improvements on a property are supposed to confer a degree of control.

An earlier article about the conflict was more detailed:

[. . .] The baseball field on their school grounds was built in 2008 by civic-minded parents who saw an abandoned field at a closed school that was perfect for a baseball field for Oakland Tech. They got approval to do it with their own money, $400,000 of it, and made it happen. They created a nonprofit called Field of Dreams and now raise $10,000 to $15,000 a year to maintain the field.

But at the same time the field opened, the school district decided to reopen the school site for newly arrived immigrants and refugees.

Since Oakland International opened, the soccer team at the school has been able to use the baseball field when the baseball team was not using it. But growing tensions this year over damage to the grass relegated them to an asphalt parking lot at the school.

“Because the Oakland International students look out the window and see that field every day, they feel it’s theirs, which is not the case,” said Oakland Tech varsity baseball coach Bryan Bassette. “It seems very opportunistic on their end to wait for it to be built and then stake a claim to it.”

Bassette said the soccer program at Oakland International High caused about $20,000 worth of damage this fall. They had nothing to offer to pay for the damage and did not offer to help during volunteer work days. [. . .]

The district allowed that the immigrants could use the field if they didn’t wear shoes with cleats. If you look closely at the front page photo, you can see cleats on one girl’s shoes.

Diversity means agreements don’t have to be followed by non-Americans, and citizens are supposed to shut up and take it.

Following is the article called “Their goal: A level field” in the newsprint version:

At a recent soccer practice at Oakland International High School, the boys welcomed Paulos Gurmu, a newcomer from Ethiopia. After hours of running on asphalt under a blazing sun, they sat in a circle to dole out “positivity points.”

A Burmese teen who’d immigrated from a Thai refugee camp gave a point to Paulos, for “playing a lot on his first day, passing a lot.”

At a girls’ game the next day, Fernanda Barrera, a 10th-grader from Guatemala, screamed her coaching advice to fellow players from the sidelines. “Relax, blue, and pass the ball,” she yelled in stilted English, referring to her team by its shirt color.

English is a new language at this public school for recently arrived immigrants from nearly three dozen countries. A third are refugees, many of whom have witnessed atrocities in their home countries. A fourth had received little or no formal education before landing here.

It’s a Tower of Babel where unity comes in part through Soccer Without Borders, a program that got its start at this 7-year-old campus and has since spread globally. Founder Ben Gucciardi crafted it precisely to help youths bond across cultural chasms and blossom as leaders in and out of the classroom.

Through soccer, Barrera said, we “make communication with people who are different from us.”

Now the soccer program is uniting students in unexpected ways.

Tired of practicing on broken asphalt or, when lucky, on grass at a nearby school or city park, players have joined forces with the student leadership club to press for a field of their own.

The issue is sticky for the Oakland Unified School District, which made an admitted blunder years ago when it allowed a parent group to take the field next to the fledgling school and transform it into a baseball diamond — for students from a high school a quarter-mile away.

Bolor Erdenebat, a 17-year-old junior who arrived from Mongolia in early 2013, said that back home, she didn’t know the meaning of “human rights.”

As a member of the leadership club, she launched an online petition that has gathered more than 2,400 signatures.

Her goal? “I want to give the immigrant students the same rights as U.S. citizens.”

Part of a national network of international public schools, Oakland International emphasizes collaborative learning, development of confidence through public speaking and a respect for each student’s personal story. Language instruction permeates all endeavors.

The student population morphs with global crises. This year, because of rising gang violence in Central America, 40 or so students arrived as unaccompanied minors, largely from Honduras and El Salvador.

The soccer program was an outgrowth: Founding principal Carmelita Reyes in 2007 was readying the closed school building for her inaugural class of 56 when she noticed a group kicking a ball around on the adjacent field, at the time a patchwork of dirt and dying grass.

It was an International Rescue Committee camp, launched with the help of Gucciardi, a semipro soccer player with a master’s in alternative education. Participating boys were refugees, largely of Liberian, Burmese and Turkic descent.

Reyes’ eyes lighted up. Her school had no athletic budget and a demographic comparable to the camp’s. She pressed Gucciardi to stick around as a volunteer and help with physical education and after-school soccer. By 2008, Soccer Without Borders came together with a boys team. The girls followed.

These days, half of the school’s more than 300 students participate at some point during the year, and team members have a 95% graduation rate, Gucciardi said.

“I see soccer as a tool,” said Gucciardi, who sets out rules the youths must follow: healthful eating, a helping spirit and, above all, respectful treatment of others on and off the field. “I’m not interested in winning or losing; but if this is something that can help these amazing young people get where they want to go, then we’ve done our job.”

Omar Benitez, 18, is a testament to that success. Now a passionate advocate for a permanent practice field, the teen who emigrated from Bogota, Colombia, two years ago found his first school friend — from Liberia — through soccer long before his English was functional.

In the portable trailer that houses “Coach Ben’s” office, Omar has received help preparing for his SATs and applying for college scholarships, as well as counsel on his fledgling relationship with his stepfather at home.

Gucciardi has made all the difference in his new life in America, said the teen, who considers him “a second father.”

For years, Reyes and Gucciardi sought to insulate students from the tensions surrounding the issue of the field.

The clash had its origins in two decisions made in 2007, while the Oakland Unified School District was under receivership. Oakland International was given the all-clear to occupy a closed campus in the Temescal neighborhood.

Meanwhile, a committee of Oakland Technical High School parents and community leaders was authorized to turn what was once the International campus’ field — where Gucciardi’s camp for refugees had played — into a baseball diamond. (Oakland International was so tiny, officials reasoned that it didn’t need the field.)

The parents raised more than $400,000 in donations and sponsorships and worked hard to keep their “Field of Dreams” pristine. The district granted the international students access to it for P.E. and soccer — as long as they didn’t wear cleats.

A number of the baseball parents took exception. There were times, Reyes and Gucciardi recalled, when fathers tried to chase them off. By last fall, the field was re-seeded and the sharing arrangement ended. The International students could no longer use it.

“It feels sad,” said Graciela Bibiano, 17, a lanky girls team captain who grew up near Acapulco, playing with the boys. “We don’t get to play together as a team and a big family. And that’s what we are.”

The International students’ campaign has been a civics lesson in action.

Bolor was among a group of students who took a field trip to their first school board meeting. The one-minute buzzer that cut off speakers was a bit alarming, she said, but she was impressed by board members’ diplomacy in the face of some “yelling.”

“It was a whole process, with people demonstrating their ideas and trying to get something,” she said. Her strategy: to launch a petition on change.org and wait “for a lot of signatures.”

Yasser Alwan, 17, tapped his multimedia skills. The Yemeni youth became enamored with design and video while at the school, where a class encourages students to use the medium to tell their stories. During an internship at the school district’s TV station, he worked for hours to piece together a promotional video for the soccer field campaign.

Meanwhile, Solomon Camara, a 17-year-old from Liberia, began approaching board members by phone and email. “I learned that politics is a little fun — I just like it,” he said. “Before, I would have felt intimidated.”

The district held a meeting in April in the school cafeteria. On one side were the International students. The Oakland Tech side of the room, meanwhile, was almost all parents. Their anger was directed largely at the district, but students said they were startled by some comments telling them to return to their home countries if they were dissatisfied here.

“Some of them, they hide some hate for us,” Omar said in an interview later. But a mediator urged both sides to meet in the middle of the room and shake hands, and the conversation continued.

City officials are now working with the school district to see if shared facilities can be created on city land that would serve soccer, baseball and softball players.

“It gives me a lot of heartache to see that much conflict,” said school board member Jody London, who represents the district and must work on behalf of both schools. “But it’s really shown these students that they can have a voice and they can make a difference.”