GOP House Majority Whip Kevin McCarthy (R- Bakersfield, Calif.) used to oppose Amnesty. His official position was that “we should not provide any Amnesty that would benefit those who defy our laws and enter the United States illegally.” [ Issue Position: Immigration,  Project Vote Smart, Jan. 1, 2011]

But now he’s just another Hispandering Republican who would betray American citizens in exchange for what he hopes is another few years in Congress. [House Majority Whip: Legalize undocumented immigrants, by Jose Gaspar, KBAK/KBFX Eyewitness News, Jan. 21, 2014]

McCarthy is the third-ranking Republican in the House. His 23rd District has become more “diverse” over the years. Most of Kern and Tulare counties are within McCarthy’s district, and those counties are among those suffering the brunt of Mexifornication. 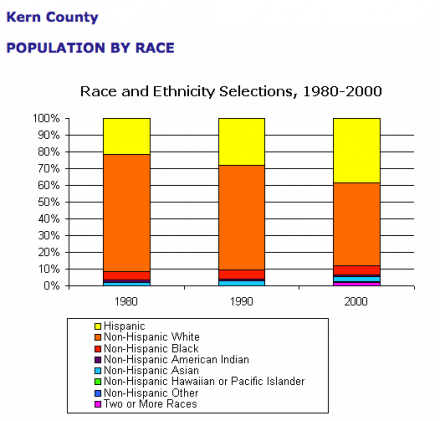 The Hispanic population of Kern County, where McCarthy is from, tripled over a few decades. Hispanics now vastly outnumber whites in both counties. As of 2012, those who consider themselves white alone, not Hispanic or Latino, are 38% of the Kern county population. Those who identify as Hispanic or Latino made up 50%.

But what has been saving McCarthy’s political hide is that the proportion of Hispanic registered voters is not as high as the Hispanic proportion of the population. Many of them are illegal; many more are “anchor babies” but still too young to vote.

Thus McCarthy’s district is a microcosm of California. Its population is tipping [ Latinos set to surpass whites in California in March,  by Melody Gutierrez, S.F. Gate, January 16, 2014] but its electorate is still American enough to make it eminently winnable for a GOP/ GAP not cursed with cowardly, corrupt and stupid leadership.

So McCarthy is safely ensconced on one of the last few GOP islands within a sea of left-wing Mexican rot.

So why is he caving?

The Associated Press reports that McCarthy’s district “is around 35 percent Latino and reliant on agriculture, which uses immigrant labor, and he's the highest-ranking House Republican from an immigrant-heavy state like California.” [“Immigration Activists Rally in Bakersfield, Calif.,” by Gosnia Wozniacki, August 14, 2014]

NPR fills in the key detail, left out by the AP:

The big farms here that produce much of the nation's fresh produce have long relied on immigrant labor — much of it illegal. Today Latinos make up half of Bakersfield's population. [“Immigration Reform Activists March To Calif. Farm Country,” by Kirk Siegler, NPR, August 17 2013. Emphasis added, links in original]

The left-wing Think Progress correctly noted that farm workers are some of the hardest-working laborers in the country. Yet, agribusiness wanted to reduce farm workers’ wages even further [“Agribusiness Pushes To Lower Farm Workers’ Wages May Undermine Deal On Immigration Reform,” by Igor Volsky, April 5, 2013] Small wonder that Americans are not filling those jobs.

The SEIU, which understands what is at stake with Amnesty, has warned McCarthy of the “changing demographics in his district,” and how these changes will hold his “feet to the fire” on Amnesty. [State-wide coalition presses Rep. McCarthy to support immigration reform, August 10, 2013]

McCarthy has been under intense pressure from activist groups bussed in from Los Angeles and around the state. In fact, about 1,500 pro-Amnesty protesters swamped his office over the summer, in “[c]aravans of cars and buses carrying union members and others.” This hostile caravan must have looked like a scene straight from The Camp of the Saints; a Third World horde using the political system to gain advantages for itself, in a nation the horde seeks to change at any cost.

The horde threated to “call McCarthy’s big agricultural and oil-drilling donors to urge them to press McCarthy to bring a pathway to citizenship up for a vote in the House.” [Immigration Reform’s Whipping Boy: Kevin McCarthy, by Jake Sherman, Politico, August 14, 2013. Emphasis added]

Of course, the taxes illegal aliens pay will not even begin to cover the costs of their welfare checks and government-funded medical care. Stanford professors Michael Boskin and John Cogan painted this nightmarish picture of demographic collapse:

McCarthy is apparently trying to stay afloat in the demographic tide that has destroyed conservatism in California, and he doesn’t care who he has to drag down with him. He certainly has no intension of reversing or even stopping the tide. Instead, he is pandering to Hispanics to buy himself another term or so in Congress. Eventually he will be swept away, and he must know this. But he probably figures he can become a Big Ag lobbyist.

And there is something even more disgraceful about McCarthy’s pandering, because immigration changes our national identity, unlike many other bad policies supported by the Stupid Party. McCarthy would not be pushing Amnesty for Irish, or Somali, or Asian illegals. He does, however, increasingly fear Hispanic voters. So, to appease one particular ethnic group, he will gladly rip apart our country’s immigration laws, effectually erasing the border. This is tribal favoritism, GOP style.

McCarthy is taking sides with a racial minority group at the expense of the American nation. For that, he is another profile in treason.