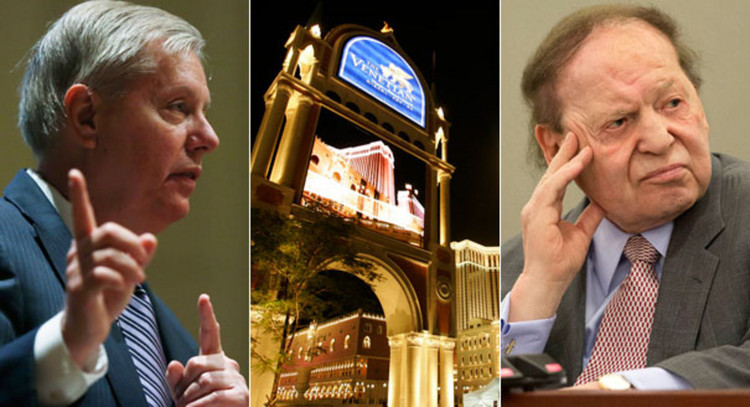 Above, Lindsey Graham and Most Important Constituent

With incredible selfishness and boorish lack of scruple, gambling mogul Sheldon Adelson has diverted from his hobby of buying the Republican Party to purchasing legislation to repress online competition to his casino businesses.

Graham is expected to introduce a bill to ban Internet gambling as soon as next week, according to sources working on the issue.

Adelson launched a coalition late last year to ban online gaming. The billionaire casino mogul promised to use his fortune to push the issue, arguing that it is not good for society and could hurt the traditional business model of casinos.

Adelson has not been a long-time Graham supporter, but in 2013 he and his wife Miriam — who have spread their money widely among Republicans — cut checks for $15,600 in campaign contributions to Graham.

The Graham campaign is downplaying the financial connection of course, but ThinkProgess helpfully points out before the direct contributions last year

…the Adelsons had given even more help to the senior Senator from South Carolina. Las Vegas Sands PAC sent an additional $5,000 contribution to Team Graham — the legal maximum. And on April 30, 2013, the Adelsons hosted a high-dollar fundraiser for Graham at their Venetian hotel in Las Vegas. According to the event invitation, the Adelsons hosted Graham and “special guest” Sen. John McCain (R-AZ) at their exclusive “Paiza Club” for an evening reception and policy discussion. The event, which cost $1,000 to attend, exclusively benefited Graham’s re-election campaign.

Adelson of course has every incentive to hire top talent to camouflage his political spending. Billionaire Pol-buying is gradually emerging as a public policy concern.

The online gambling people have displayed great determination in defending themselves. Patriots will be interested in whether they have the wit to publicize Graham’s subservience to Adelson. In socially conservative South Carolina, having a Senator owned by Las Vegas gambling interests will not be popular. Negative ads will do it—the online gamblers need not to support anyone else.