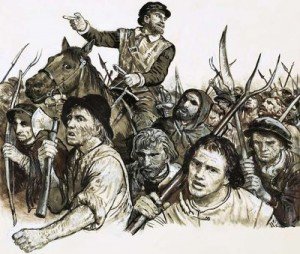 In After North Carolina: Q – Will Whites Vote For The AdelZuck Party? A – Not Enough yesterday I remarked that despite huge funding against essentially penniless opponents

…what is really astonishing here is how low the vote share of the winners was. Tillis could only manage 46% of the vote which would have forced him into a runoff in neighboring South Carolina.  A massive 41% of the vote in NC-2 was cast against Ellmers for a candidate who could barely afford to drive around the district.

This view is obviously shared by the control clique at the RNC, who are moving to completely exclude the Peasantry from the Republican Presidential nomination process.

If the party's chairman, Reince Priebus gets his way, the GOP will pick its nominee more quickly than during past contests and have fewer debates in which candidates could criticize each other.

RNC officials also have been interested in having greater control over the format and moderators of the debates….If the RNC gets its way, moderators would agree to keep debates focused on topics Priebus prefers

Michelle Malkin was right about Priebus and so was I.

The debates were extremely inconvenient to the GOP apparatchicks in the 2012 cycle because they wrecked the effort to deploy Rick Perry as a back-up and exposed the reality that Romney was a dud.

This despite solid MSM help on the really explosive issues as I noted in Saturday's GOP Debate: MSM Mask Slips – Foreign Policy, Immigation Dissenters To Be Silenced

The Conservatism Inc objective here is doubtless to replicate the situation I discussed in Why Did Romney Wimp Out on Chick-fil-A? Follow The Money: to exclude individuals and issues distasteful to the key donors – regardless of how they might motivate the base.

The objective is to maximize revenues: winning the election is quite secondary.

As I said yesterday

The sick thing is that those buying this disaster do not care. The Democrats will just as readily obey them on foreign policy and Amnesty and they prevent the otherwise inevitable evolution of the GOP into the Generic American Party – which may well be their true objective. The Consultants/Super PAC operators do not care either: they get rich in the process.