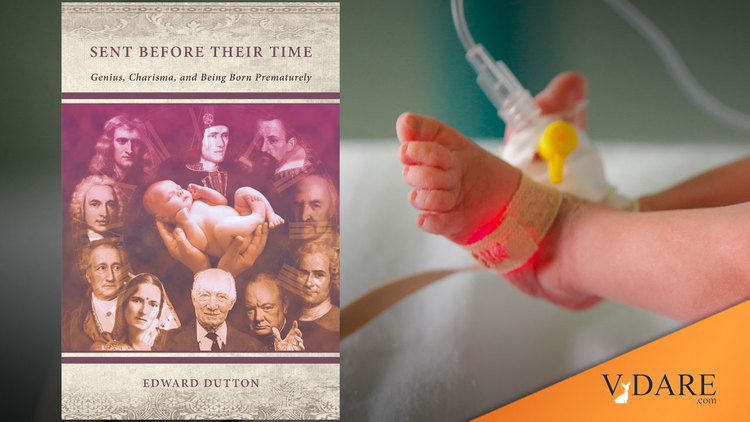 Why Were So Many Geniuses Born Prematurely? 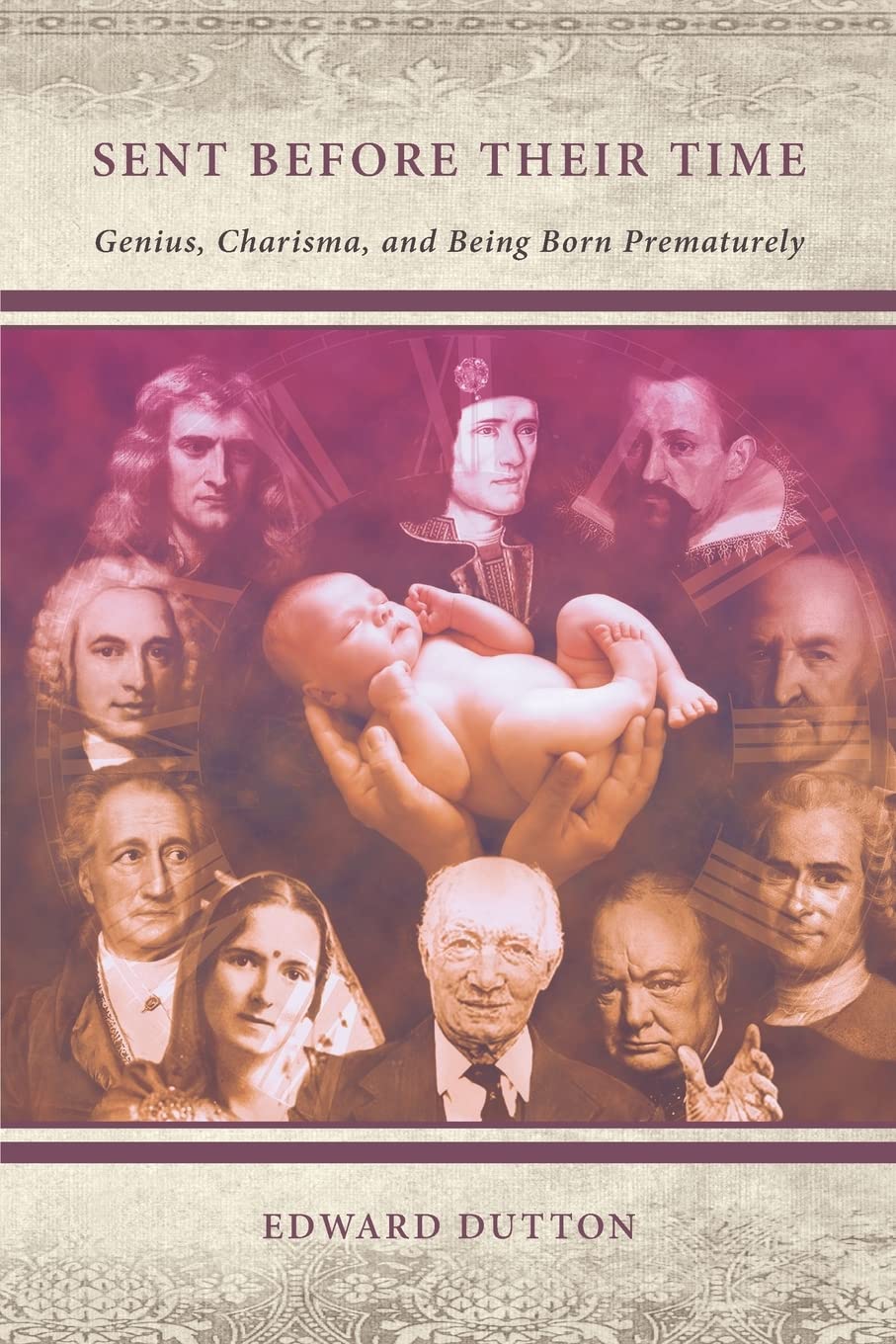 Otherwise brave scientists now demur from researching fascinating and important areas, such as race and sex differences, for fear of being “cancelled,” bullied and abused by the Woke mob. But personally, I don’t particularly care about this bullying—and a reason may be that I was born three months prematurely, back in 1980 when the survival rate for a birth that early was about 25%, not the 90% that it is today.

As result, as I explore in my new book Sent Before Their Time: Genius Charisma, and Being Born Prematurely (in which, with regard to my “preemie” childhood, there is an autobiographical chapter), I couldn’t walk up or down stairs until I was eight. I would crawl up, and shuffle down, in a seated position. I still have an “unusual gait.” I walked “like a Thunderbird” (the electronic marionette puppets of a classic British TV show) and so was constantly falling over, leading to cut knees and patches on my trousers. “Why do you walk like that?” children would innocently inquire, as I came last in all races, always, and couldn’t play many of their games. “You walk like a spastic!” others would snort.

The psychology of those who need to behave like this is very much the psychology of the Woke mob. As I discuss in the book, the Woke are high in mental instability, leading to extremely pronounced negative feelings about themselves, a burning desire for power over what they perceive as a dangerous world in which everyone is conspiring against them. They are selfish but, fearing their own weakness, they can only play for status by virtue-signalling how moral they are. But being power-obsessed, they look down on poor people and black people. And so they project their guilty feelings about this onto “scientific racists,” whom they assume—like themselves—could only possibly believe things because these beliefs make them feel good, when in fact “scientific racists” have carefully reasoned their way to their conclusions.

In so doing, the Woke, fearing being “outed” as the execrable people they are, present themselves as morally perfect, at least to the credulous. Similarly, people who secretly fear that they are “different” or physically deficient will project this onto someone mildly disabled—“Spastic! Thunderbirds are go!”—to distract negative scrutiny from themselves.

Currently, about 10% of babies are born preterm and 90% survive. In 1950, 7% were born preterm and 40% survived. As an “extreme preemie” (born at 28 weeks or earlier), I have long been aware that prematurity is the biggest single predictor of bad life outcomes. Doctors rarely even attempted to save premature babies, defined as being born 3 or more weeks early, until the 1930s; so manifestly doomed were they. Thus the mother of recently deceased actor Sir Sidney Poitier, “very preterm” at two months early, was told to give up on him.

And all of these problems, and there are many more, are as a direct result of prematurity, often caused by mothers with high blood pressure going into early labor.

So, isn’t it odd that so many geniuses—people widely accepted as having made a major breakthrough in their particular area in science or the arts—were born prematurely? They include Isaac Newton, Johannes Kepler, Thomas Hobbes, Jean-Jacques Rousseau, Goethe, Voltaire, Victor Hugo, John Keats and many more. Even though I showed in the book that some rumored preemies—Einstein, Darwin, Picasso—were not preemies at all, the numbers are still eye-opening.

And the same appears to be true of many charismatic figures: those who inspire a people to great things, such as religious leaders or highly significant political leaders: Buddha, Moses, Hussein (the founder of Shia Islam), possibly the Prophet Mohammed, Methodism founder Charles Wesley, wartime leader Winston Churchill, Savitri Devi (who popularized the idea that we are living through the “Kali Yuga,” the age of madness), and Helena Blavatsky, the founder of Theosophy.

Even in mythology there are hugely important preemies, including Dionysus and Seth, the Egyptian god. There are many preemie characters in Shakespeare plays such as Richard III, Edmund in King Lear, or Macduff in Macbeth. They tend to be portrayed as either brave, if flawed, heroes, or as evil geniuses; implying that our ancestors were aware that there was something odd about preemies. How could such an enormous environmental insult as prematurity lead to genius of any kind?

And to be sure, there is a relationship. I statistically demonstrate in the book that people born preterm or of documented low birth weight—which has the same psychological correlates and is generally a proxy for being preterm—are overrepresented among widely accepted geniuses. So, why would this be?

My answer: being born prematurely has the potential to cause the peculiar psychological make-up that is characteristic of the genius.

A genius is firstly characterized by outlier high but also narrow intelligence. Someone like Isaac Newton, who when he was born could fit in a “quart mug,” was extremely intelligent, but utterly incompetent at practical things which are only weakly associated with intelligence and with which ordinary people have no problem. He was highly “intelligent” but only in very specific areas.

This phenomenon is taken to its extreme with autistic savants. These people, overwhelmingly extreme preemies, are mentally retarded but are highly “intelligent” in very specific areas, such as having perfect pitch—true of blind autistic savant Derek Parvacini, born at 25 weeks in 1979—or fantastic mathematical ability, as in the movie character “Rain Man,”

who was a composite of real people.

This kind of intelligence, though less narrow, is also found in people who are born prematurely but are not autistic savants. Due to localized brain damage as a result of their small size and lack of oxygen due to under-developed lungs, their brains coopt non-damaged areas resulting in unusual and highly lop-sided intelligence profiles, just as is found with geniuses. This allows to them to “think differently” and to make “unusual connections.”

Then there is the genius personality. New ideas almost always offend, but geniuses don’t care about this because they tend to be high in autism traits. Scientific geniuses, at least, are obsessed with systematizing and are thus low in empathy, as these sit on the opposite ends of a spectrum: they are focused on the truth. Prematurity is a significant predictor of autism.

In many cases, as with Isaac Newton, geniuses are also high in psychopathic personality traits and thus simply don’t care if their ideas offend. Related to this, they have problems with impulse control and with following the rules. Not being rule-bound, they will “think outside the box” and thus dare to consider things that ordinary people would not. And preemies have elevated levels of psychopathic personality, due to abnormal brain development.

Geniuses also tend to be unable to “play the game.” They become easily bored and are only prepared to work on that which truly fascinates them, on which they can intensely focus. This means that they might not do too well at school or even at university—Newton nearly failed his degree—and will take time to find their calling. In other words, they have ADHD. And this is elevated among preemies too.

Especially among charismatics, though to a lesser extent among scientific geniuses, there is elevated depression and anxiety. This swirling feeling of chaos can make people desperately want to make sense of the world, motivating their science or art. Or it can lead to a breakdown and a religious experience, as a psychological coping mechanism. Or it can lead to the development of a very strong sense of identity and purpose, again as a coping mechanism. The latter two processes would seem to characterize many charismatics. And this would explain why so many prominent charismatic religious and political figures are preemies.

In that we would expect the lives of preemies to be abject failures, when they are not, and if they are not potentially as a consequence of the psychology that prematurity would possibly predict, then the relationship is very likely to be causal.

And as I argue in my book, the survival of a small number of preemies may even make evolutionary sense. The group with the optimum low level of geniuses—too high and you have too many anti-social people—will triumph over other groups due to superior weapons or leaders that inspire greater ethnocentrism-inducing religiosity, where the group is certain that it is blessed by the gods. There would need to be a mechanism for this.

This mechanism has to be neurodiversity. And one means of achieving that mechanism, other than unlikely genetic combinations rendering the offspring very different from the parents, would be often older or stressed mothers who expose their fetuses to atypical doses of hormones and other chemical signallers. These may, among other things, better condition the fetus to survive a premature birth. And the fact of this birth, and the infant’s level of development at birth, would further interfere with the infant’s neural development. All of which could lead to the development genius characteristics.

And, being born mildly disabled, these preemies would almost certainly have had their characters forged partly in response to having to fend off the Woke bullies of their day.

As Shakespeare’s Richard III put it: “

But I, that am not shaped for sportive tricks,

Nor made to court an amorous looking-glass...

Deformed, unfinish’d, sent before my time

Into this breathing world, scarce half made up…”