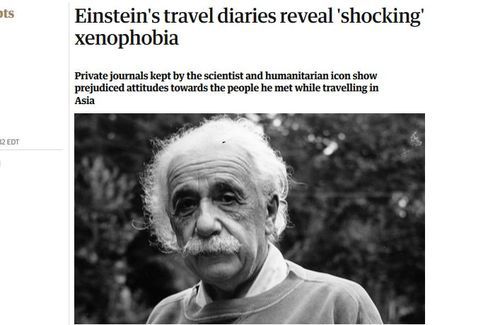 And Then They Came for ... Einstein?

The publication of Albert Einstein’s private diaries detailing his tour of Asia in the 1920s reveals the theoretical physicist and humanitarian icon’s racist attitudes to the people he met on his travels, particularly the Chinese.

Written between October 1922 and March 1923, the diaries see the scientist musing on his travels, science, philosophy and art. In China, the man who famously once described racism as “a disease of white people” describes the “industrious, filthy, obtuse people” he observes. He notes how the “Chinese don’t sit on benches while eating but squat like Europeans do when they relieve themselves out in the leafy woods. All this occurs quietly and demurely. Even the children are spiritless and look obtuse.” After earlier writing of the “abundance of offspring” and the “fecundity” of the Chinese, he goes on to say: “It would be a pity if these Chinese supplant all other races. For the likes of us the mere thought is unspeakably dreary.” …

Further passages in the diaries, which are thought to have been written for Einstein’s stepdaughters in Berlin while he and his wife were travelling in Asia, Spain and Palestine, and as an aide memoire, see him writing of the Chinese that “even those reduced to working like horses never give the impression of conscious suffering. A peculiar herd-like nation [ … ] often more like automatons than people.” He later adds, in Rosenkranz’s words, “a healthy dose of extreme misogyny” to his xenophobia with the observation: “I noticed how little difference there is between men and women; I don’t understand what kind of fatal attraction Chinese women possess which enthrals the corresponding men to such an extent that they are incapable of defending themselves against the formidable blessing of offspring”.

In Colombo in Ceylon, Einstein writes of how the locals “live in great filth and considerable stench at ground level” adding that they “do little, and need little. The simple economic cycle of life.”

Einstein’s perceptions of the Japanese he meets are, in contrast, more positive: “Japanese unostentatious, decent, altogether very appealing,” he writes. “Pure souls as nowhere else among people. One has to love and admire this country.” But Rosenkranz points out that he also concludes that the “intellectual needs of this nation seem to be weaker than their artistic ones – natural disposition?”

“Einstein’s diary entries on the biological origin of the alleged intellectual inferiority of the Japanese, Chinese, and Indians are definitely not understated and can be viewed as racist – in these instances, other peoples are portrayed as being biologically inferior, a clear hallmark of racism. The disquieting comment that the Chinese may ‘supplant all other races’ is also most revealing in this regard,” writes Rosenkranz.

“Here, Einstein perceives a foreign ‘race’ as a threat, which … is one of the characteristics of a racist ideology. Yet the remark that must strike the modern reader as most offensive is his feigning not to understand how Chinese men can find their women sufficiently attractive to have offspring with them. In light of these instances, we must conclude that Einstein did make quite a few racist and dehumanising comments in the diary, some of which were extremely unpleasant.”

…. In his introduction, Rosenkranz writes how it is important to explore how a humanist icon such as Einstein – whose image was once used for a UNHCR campaign with the slogan “A bundle of belongings isn’t the only thing a refugee brings to his new country. Einstein was a refugee” – could have written xenophobic comments about the peoples he encountered.