Who Will Fight For Trump? Russia Crisis Means Trump Needs To Give His Base A REASON To Support Him

Donald Trump returned from a mostly successful trip abroad to another Main Stream Media-created scandal about Russia, this time involving son-in-law Jared Kushner [Trump returns to crisis over Kushner as White House tries to contain it, by Maggie Haberman, Glenn Thrush, and Julie Hirschfield Davis, New York Times, May 27, 2017]. American nationalists can’t help but feel some schadenfreude at this news. 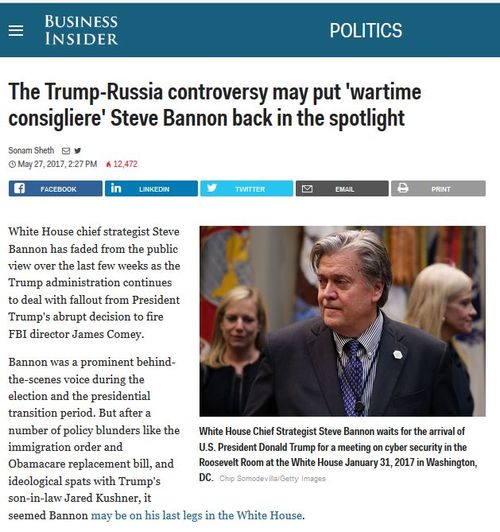 Kushner is usually pinpointed by those hoping for an America First foreign policy and populist policies on trade and immigration as the most destructive influence within the White House. Now, as Kushner may be nearing his last days in the White House, Steve Bannon is now returning to prominence within the administration and is gearing up to lead the counter-offensive against the enemy media [The Trump-Russia controversy may put ‘wartime consigliere’ Steve Bannon back in the spotlight, by Sonam Sheth, Business Insider, May 27, 2017].

This is a sign for hope. And frankly, Trump supporters need that right now. The president has been disappointing his most stalwart backers since day one by rewarding his fiercest opponents with key administration jobs, adopting Paul Ryan’s domestic priorities on taxes and health care, and defending the neoconservative foreign policy he bashed during the primary. Trump has bombed Syria, the U.S. is still supporting Saudi Arabia with massive weapons sales, and the State Department still holds to the unenforceable and frankly bizarre demand that Russia hand Crimea back to Ukraine. [U.S. Sanctions on Russia Won’t Be Lifted Until Crimea Is Returned To Ukraine: Rex Tillerson, by Graham Lanktree, Newsweek, April 24, 2017]

What’s more, while the Trump foreign policy may be disappointing, Trump’s policies on immigration are, in many ways, outright betrayals.

Contrary to his campaign promises:

Indeed, Trump has not even moved on the kind of common-sense, basic nationalist issues which you would think he would seize on simply out of political self-interest. Even National Review’s Rich Lowry and Ramesh Ponnuru complain Trump has been a “false start” for populism. They argue there was no “populist staff in waiting” to draw on for key positions, nor the “intellectual spadework” accomplished to develop a coherent agenda.

The authors blame Trump himself for much of this failure, but also the Republican Party generally. “Victory in November 2016 surprised most Republicans and gave them an opportunity to build a new governing majority,” they write. “So far they are squandering it” [Populism’s False Start, May 25, 2017].

It’s hard to disagree. Yet this is fundamentally dishonest coming from National Review.

But even if they don’t mean it, this does show even National Review is at least partially internalizing the lesson of Trump’s victory. Nationalist populism and an appeal to the working class can win. “True conservatism’s” budget cutting wonkery can’t.

The real reason Trump is in trouble: he’s acting too much like a typical Republican. On healthcare, Trump and Paul Ryan are using the worst possible strategy, which is trying to tinker with an entitlement program so those who currently use it get less. This is being combined with a push for upper class tax cuts. The Democrats’ attack ads write themselves.

Ann Coulter’s strategy of restoring a free market for health care for those who don’t need welfare makes more sense than this. A single payer system like some on the Alt Right advocate would make more political sense than this. Doing absolutely nothing and focusing on trade and immigration would make the most sense of all.

But instead, Trump is throwing away his political capital to push through the agenda of a man who tried to take him out during the campaign, and may be consciously trying to make the Trump Administration fail.

And yet, Trump himself is still not being abandoned by his base. Instead, they largely blame Congress for any failures. Indeed, pollsters say voters are more loyal to Trump personally than the GOP [No buyer’s remorse: Trump backers stand strong, fault Congress for shortcomings, by Seth McLaughlin, Washington Times, May 28, 2017].

Some of this even played out in the recent Montana special election. Greg Gianforte, who is actually a bit of a cuck, actually benefited from Donald Trump’s involvement (via robocalls, Trumpist election slogans, and a direct endorsement) in the Montana special election which was supposed to be a harbinger of coming Republican catastrophe [Politico: Trump ‘Was An Asset, Not a Drag, For Greg Gianforte in Montana House Race, by Adam Shaw, Breitbart, May 26, 2017]. My theory: his last minute body slam of The Guardian’s Ben Jacobs was actually a last minute boost [Flynn: Greg Gianforte’s Critics Forgot That The Bodyslam Is A Finishing Move, by Daniel Flynn, Breitbart, May 26, 2017].

Still, Gianforte’s victory was much narrower than it should have been because of how despised the Republican health care plan is [The GOP’s health-care bill is a polling disaster, by Dan Mangan, CNBC, May 26, 2017].

Paul Ryan naturally denounced Gianforte before the election instead of just keeping his mouth shut for a few hours[Paul Ryan calls on Gianforte to apologize, Fox News, May 25, 2017]. Yet Ryan’s nauseating weakness isn’t making him some kind of a respected figure. He can’t even pull off a photo-op with 8th graders [8th graders refuse to take a photo with Paul Ryan because they don’t “want to be associated with him,” by Heather Dockray, Mashable, May 28, 2017].

The Ryan agenda is unpopular. And the GOP is in trouble. Democrat Jon Ossoff now has his biggest lead ever over Karen Handel in the GA-6 special election to replace Tom Price [Race to replace Tom Price: In-depth analysis, WXIA Atlanta, May 27, 2017]. A Democrat victory there will lead to weeks of MSM jubilation about how the Left will retake the House.

This is an especially bitter blow for immigration patriots, because Tom Price was a consistent anti-illegal immigration vote in the House, but now the seat itself may be lost. (The GOP Establishment nominee, Karen Handel, was by far the worst of the primary candidates according to Numbers USA). All so Price can push an unpopular health care bill as head of the Department of Health and Human Services. It’s an insane waste.

But why should the GOP win? What is the GOP doing with its unified control of the federal government? What is Trump?

Reports indicate Donald Trump is preparing major changes in the coming weeks [Trump pushing big White House changes as Russia crisis grows, by Michael Bender and Peter Nicholas, The Wall Street Journal, May 27, 2017]. But these can’t just be cosmetic, nor something as simple as having some lawyers look over his tweets.

The Democrats are coming for Donald Trump and they will use the Russia issue to impeach if they take the majority, even if (as it seems increasingly clear) there’s no actual crime or misconduct there. Trump needs his base, which is still loyal to him, to have a reason to fight for him. And they will fight for him—but they won’t fight for the GOP.

That means fighting for his nationalist agenda. And that means jettisoning the business-as-usual Republican approach which has put his administration on the brink of disaster. If that means annoying the deficit hawks, so be it. The nation is at stake. And so is Trump’s position as president.

I suggest that we add more dollars to Healthcare and make it the best anywhere. ObamaCare is dead - the Republicans will do much better!

It all depends on the will of Donald Trump himself. It always did. The Ruling Class is coming for him and they want to destroy him.

It’s about time to see the streetfighter and the populist that Trump’s supporters thought they had elected.