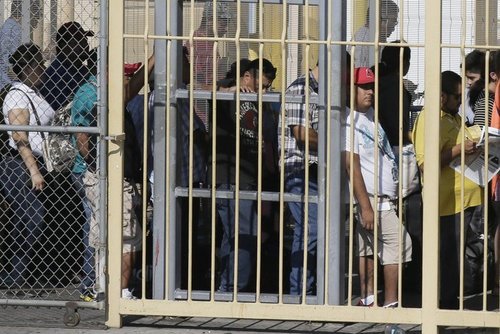 The Trump Effect: THE ATLANTIC Not Even Trying to Make Sense Anymore

Donald Trump’s heresies have The Atlantic so worked up that it’s not even bothering to try to make sense anymore:

The Problem with Challenging Birthright Citizenship

If the Fourteenth Amendment means that the children of undocumented immigrants are not citizens, as Donald Trump suggests, then they are also not subject to American laws.

Imagine the moon rising majestically over the Tonto National Forest, highlighting the stark desert scenery along the Superstition Freeway just west of Morristown, Arizona. The sheriff of Maricopa County sips coffee from his thermos and checks that his radar gun is on the ready. A lot of lawmen wouldn’t have bothered to send officers out at night on such a lonely stretch of road, much less taken the night shift themselves. But America’s Toughest Sheriff sets a good example for his deputies. As long as he’s the sheriff, at least, the rule of law—and the original intent of the Constitution—will be enforced by the working end of a nightstick.

Suddenly a car rockets by, going 100 miles an hour by the gun. Siren ululating, the sheriff heads west after the speeder. The blue Corolla smoothly pulls over to the shoulder. The sheriff sees the driver’s side window roll down. Cautiously he approaches.

“License and registration,” he says.

But the driver simply grins at him. “I’m sorry, Sheriff,” he replies. “I don’t have to do that.”

“You’re not from around here, are you?” the sheriff says between clenched teeth. “You better not make me ask you again.”

“I was born here—just a few miles from Organ Pipe, actually,” the driver says. “But, you see, my parents—well, they’re undocumented immigrants. In fact, they are right here in the back seat and they can show you their lack of papers if you want. And since they’re undocumented, and I’m their child, well, I’m not—“

The lawman feels sick. “Then you’re not subject to my jurisdiction,” he says.

Then the stranger winks. “And sheriff?” he said. “You be sure to have a nice night.”

The sheriff walks back to his Charger. There’s something wrong with this state of affairs, he thinks. Damn the Fourteenth Amendment and its true original intent.

That little counterfactual is inspired by the latest toad leaping from the mouth of Donald Trump. During a stop in Iowa, he gave voice to the stubborn myth that the Fourteenth Amendment’s citizenship clause does not provide birthright citizenship to the children of undocumented aliens.

And that’s the Constitutional reason why foreign-born tourists visiting the United States are allowed to drive like this:

Sure, driving like a drunk Russian may look illegal to you or me, but visitors from abroad aren’t American citizens so they’re not subject to American laws; the cops’ hands are tied.

That’s why rich tourists flock to America for “Finally, Above the Law” vacations in which they drive 125 mph through school zones while snorting cocaine from the thighs of child prostitutes. Maybe, on the whole, that’s not a good thing (although, you have to admit, it’s good for the economy), but it’s in the Constitution, so whaddaya whaddaya?

Also, if you tell a cop you are a Sovereign Citizen, he can’t give you a ticket. Try it!