Face It: These RATs (Republicans Against Trump) Are Traitors To The Party—And To America

A new poll has Donald Trump within one point as “Crooked Hillary” continues to bleed support because of her reputation for corruption [Trump Nearly Tied With Clinton in New Survey, by Eli Yokley, Morning Consult, July 5, 2016]. FBI Director James Comey just essentially admitted Hillary Clinton broke the law by mishandling classified information, but shrank from charging her because of her last name.  The shockingly radical Democratic Party platform now endorses de facto open borders with an end to “raids and roundups,” a full defense of Barack Obama’s Executive Amnesties, and a “path to citizenship” for the tens of millions of illegals  [2016 Democratic Party Platform Draft, 2016 Democratic National Convention, July 1, 2016]. The GOP might never recover from this demographic death blow—but this is the moment that Republicans Against Trump [RATs] have chosen to stab him in the back.

To the enthusiastic applause of the Lying Press, RATs are consciously seeking to deliver the Oval Office to the woman whom Conservatism Inc.  has been promising to defeat for two decades.

Thus one group, “Republican Women for Hillary,” just received the usual adoring coverage in CNN, where they were described as “an unlikely gang of pro-Clinton foot soldiers”:

For these women who founded the group, (and one man who has joined in solidarity), Trump's bombastic style, offensive rhetoric toward women and minorities, slapdash policy "suggestions" risk destroying the party.

CNN’s editorializing aside, who are these “unlikely” women? The founder is one Jennifer Lim, who works for…the U.S. Chamber of Commerce! Of course, the Chamber of Commerce is outraged at Donald Trump’s “America First” approach to issues like trade and immigration.

Indeed, CNN’s MJ Lee exults about how many traditionally Republican corporate leaders are coming around to supporting the Democrats:

Hillary Clinton has an opportunity that has eluded Democratic presidential nominees for decades: Being the candidate of big business

who works for the conservative American Action Forum think tank and has formerly campaigned for Republicans like Trent Lott, Mitt Romney and Haley Barbour.

Of course, Lott was a squish who was last seen complaining that Talk Radio was a “problem” that “we have to deal with.”

Mitt Romney has been cucking since the beginning of the 2016 campaign.

As for Haley Barbour, the former Mississippi used to lobby for the Mexican government on Amnesty. And his son Austin is a GOP operative who worked for Jeb Bush. [Austin Barbour joins Jeb Bush campaign to help in South, by Geoff Pender, The Clarion-Ledger, September 29, 2015] Barbour Jr. just gave an interview to POLITICO after Hillary was let off the email hook, bashing Trump—saying the “onus” was still on Trump to win over conservatives [Clinton’s email woes fail to sway Never Trump Republicans, by Katie Glueck, Politico, July 5, 2016].

And who else is Milloy connected to? According to CNN’s Moody,

She was recently married to Tim Lim, the founder of a media buying firm called Precision and a partner at Bully Pulpit Interactive, which has a contract with the Clinton campaign. But, she said, her reasons for supporting Clinton are genuine.

If we can’t take the word of a paid political hack, who can we believe?

What we’re really seeing here is the union of Political Correctness and the Cheap Labor agenda. This is also what happened after the Brexit campaign in the United Kingdom. Suddenly, the “Trending” stories on Facebook and commentaries promoted by the MSM were pushing two key premises: First, that the Brexit campaign had enabled poisonous nationalism; second, the campaign was threatening the profits of currency speculators and the power of self-defined “elites.”

Now it’s underway within the GOP. Sudden “true conservative” invocations of “conscience” (curiously unprompted by the unconservative candidacies of Bob Dole/ George W. Bush/ John McCain/ Mitt Romney) are closely linked to a fear that Donald Trump might actually do something to stop immigration and protect American workers.

For example, Paul Ryan picked this moment of all moments to join in an MSM pile-on of Donald Trump for supposedly sending out an anti-Semitic tweet. 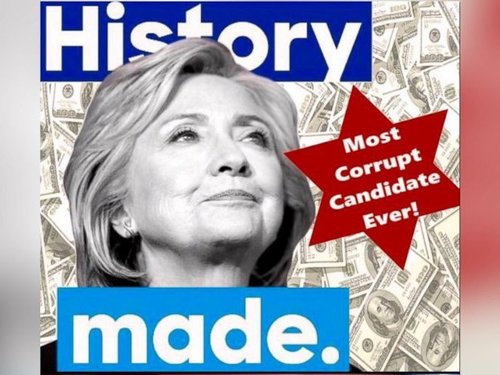 “Look, anti-Semitic images, they’ve got no place in a presidential campaign. Candidates should know that. The tweet’s been deleted. I don’t know what flunky put this up there.”

But most importantly, as you know, one of the few times I spoke out against him during the primary very forcefully was in this area, when he failed to disavow supremacists, white supremacists.

Bunk. The truth is that Trump is most likely not racist enough to know he is “dog whistling.” Trump has thus far run no television ads, has hired no staff to run his campaign in key states, and is only now beginning to put together the kind of campaign team any other candidate would have assembled months ago. And yet we are supposed to believe Trump deliberately chose a coded and obscure anti-Semitic meme, sent it out, deleted it, replaced it and then followed up with praise of the Elie Wiesel because it was all part of a grand strategy.

It is possible Trump is playing 3-D chess while the rest of us are just playing checkers. But it’s equally likely he simply grabbed and tweeted out a meme he saw being circulated online without looking carefully who made it, where it came from, or what was the significance of a six pointed star, which does not, in fact, look like the Star of David anyway.

The MSM’s hysterical reaction tells us more the mindset of Jewish journalists than some secret agenda of Trump’s. For example, Matthew Yglesias concludes one condemnation of Trump by proclaiming, “[M]obilization of majoritarian ethnic identity is bad for the Jews, whether Trump likes it or not”. [Donald Trump and the Jews, Explained, Vox, July 5, 2016]

“Majoritarian ethnic identity is bad for the Jews.” If Kevin MacDonald wrote the same sentence, they’d call him anti-Semitic.

But why is Paul Ryan going along with the esoteric theories of far Left journalists? And how come the same people willing to accept the apologies and excuses of House Majority Whip Steve Scalise about speaking at an event hosted by David Duke’s organization are so eager to virtue-signal and preen for the MSM when it comes to Trump?

One suspects it’s because Scalise has dutifully become much less eager to combat mass immigration since rising to the House leadership.

And the ugly truth is Ryan would be relived if Trump loses and he can get back to pushing cheap labor policies for his donors. It’s not about morality, but about profits. Trump is being opposed not because he is doomed to fail—but because he may yet succeed.

This campaign of sabotage is having some effect. Trump is pulling closer, but he still trails in most polls because he has not yet been able fully to mobilize the white vote and to consolidate Republican support [WashPost/ABC Poll: Trump Losing Support of Republicans, by Mark Swanson, Newsmax, June 27, 2016].

Though #NeverTrump couldn’t deny Trump the nomination, it could still deny him the general election, against a deeply-flawed opponent.

“Conservatives” who believe they can afford to let Hillary Clinton become president because of their tender “conscience” should realize they are being had. Unless mass immigration is stopped, the GOP, conservatism and the historic American nation have no future. Trump is a (admittedly somewhat unlikely) gift from God. The GOP should “thank heaven fasting” for him.

Patriots are justified in viewing RATs who want to stab the Republican candidate in the back as traitors—not just to the cause of the GOP, but to the American nation itself.