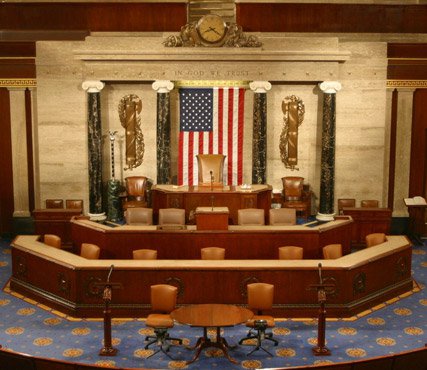 Meet the New Boss, Bad As The Old Boss: All Three Candidates for Speaker Have Supported Amnesty. They Need A Good Scare

Throwing the rascals out is always nice. But sometimes, new rascals move right back in. Whether it’s Stalin replacing Hitler or President Coin reinstituting the Hunger Games after deposing President Snow, the new boss is often the same as the old boss. Sometimes he’s worse.

Currently there are three announced candidates for Speaker in the election to be held October 8: GOP Establishment favorite Kevin McCarthy, House Oversight Chairman Jason Chaffetz, and Tea Party favorite Daniel Webster. Unfortunately, all three are on the record supporting Amnesty.

McCarthy’s boneheaded comments about the politics behind the Benghazi Committee have lessened his support [McCarthy's Benghazi gift to team Hillary, by Rachael Bade, Politico, October 1, 2015. But he is still the overwhelming favorite. McCarthy has a respectable B rating from NumbersUSA—but almost all of these positive votes were from his first term in office. His recent voting record is a “D” and he has a D- for the last Congress.

McCarthy was instrumental in drawing up the House Leadership’s pro-Amnesty “principles” in early 2014, and said that his personal view was that immigration reform will “go with legal status that will allow you to work and pay taxes." [Third-ranking House Republican backs legal status for immigrants, The Hill, January 22, 2014]

McCarthy represents a 35% Hispanic district, a fact that he frequently brags about. Of course, most of these Hispanics cannot vote. When they become citizens, and if they start voting, his seat will not be safe. Probably more significantly, he represents “one of America's top agricultural districts,” as his Congressional website boasts .

Rachel Maddow actually praised the influence of Big Business in McCarthy’s district, running a puff piece with various union, business, and GOP officials. A union worker, rather than expressing concern for laborers asked, “Is he going to represent his business? Agribusiness is the number one business here within his district. Immigration reform is critical to the success of ag and throughout the district, as well as throughout the state and country.” And the head of the Kern County GOP said "I think immigration is a big issue" in the district, and that "Kevin is definitely going to work towards something that's going to benefit the people in his district."[Immigration reform crucial to agriculture in Kevin McCarthy's district, Rachel Maddow Show, September 28, 2015]

At first glance, Tea Partier Daniel Webster, who led the opposition against Boehner seems like a solid choice for Speaker. [Webster makes his pitch for House speaker, By Nick Gass, POLITICO, September 28, 2015] He has a career A+ record from Numbers USA and an A in the most recent congress.

However, NumbersUSA’s Report Cards only address votes—not statements, a much more difficult task. When it mattered most, Webster spoke up for Amnesty.

After the Senate passed the Gang of 8 Bill in early 2013, immigration patriots managed to block a similar measure in the House. The Bill’s momentum died during the summer recess of 2013, when immigration patriots rose up against their congressmen during townhalls and only 30 Republicans would endorse a pathway to citizenship.

One of those congressmen was Daniel Webster. As the Orlando Sentinel reported,

On the same day Congress adjourned for a five-week break, U.S. Rep. Dan Webster did something he's avoided for months: speak at length about immigration reform and declare his support for an approach that would give unauthorized immigrants a pathway to citizenship.

The surprise announcement, made Friday in an interview with the Orlando Sentinel, comes just as immigration-reform groups were preparing to pressure the Winter Garden lawmaker during the August recess, as Webster is considered one of the few "swing" House Republicans on the issue.

Webster is actually worse than McCarthy, who is purportedly opposed giving citizenship to illegal aliens.

But despite his past betrayal on immigration, he may very well posture against Amnesty if it helps him strip more votes against McCarthy. As he has virtually no chance of becoming Speaker, this is still welcome as it will show the power of the issue.

The final announced candidate: Jason Chaffetz. He is likely positioning himself as a compromise candidate between Webster and McCarthy. But, like both of them, he has been terrible on immigration.

Chaffetz’s support of Amnesty has been particularly disappointing. In 2008, he shocked the open borders establishment by primarying Chris Cannon. Cannon had won awards from La Raza and MALDEF, where he told the crowd “We love immigrants in Utah. And we don't oftentimes make the distinction between legal and illegal.”

Chaffetz also has a decent Numbers USA report card, with a lifetime A- record. But like Webster, his voting record does not tell the whole story. When he first got into Congress, Chaffetz took the mandate his constituents gave him seriously. In 2009, I noted he was poised to become the next Tom Tancredo:

The fact that he went after an incumbent shows that he's not afraid to take on the Republican Establishment. The fact that he won the election by supporting patriotic immigration reform makes him perfect to be the next leader. Chaffetz already co-sponsored bills to end chain migration and birthright citizenship. He also introduced a House version of the Vitter-Bennett census amendment, attempting to make the census distinguish between citizens and illegal aliens.

Unfortunately, as with Webster, when it mattered most, Chaffetz caved on Amnesty. In September 2013 when the House was considering taking up the Senate Amnesty bill, Chaffetz said, “There should be a pathway to citizenship, not a special pathway, and not no pathway. There has to be a legal lawful way to go through this process that works, and right now it doesn’t.” [Andrea Smardon, Utah Congressmen May Consider a Path to Citizenship for the Undocumented, NPR Utah, September, 12, 2013]

Chaffetz’s idea for reforming the process: becoming the main sponsor of the Fairness for High Skilled Workers Act [Chaffetz: GOP ‘missed opportunity’ on immigration reform, by Molly Hooper, The Hill, June 4, 2015] The bill does not actually raise immigration levels, but it lifts the per country caps, and not just for skilled workers, but all employment and family visas. In practice, this would increase the proportion of high-skilled Chinese and Indian immigrants—albeit while admitting more Mexicans and Filipinos—while further decreasing the proportion of Europeans.

As chairman of the House Oversight Committee, Chaffetz has grandstanded against Conservatism Inc. pet peeves like Planned Parenthood, the IRS, and the Secret Service, but he has done virtually nothing to expose the Obama Administration’s reckless immigration policies.

In fact, his only notable action on immigration was to strip immigration patriot Mark Meadows (R-NC) of his subcommittee chair for the temerity of voting against Obamatrade (which also increased foreign workers). Even Boehner didn’t go this far.

For me, this means Chaffetz is the last person we want as Speaker.

So what can immigration patriots make of this sorry lot? First, we must not look to any of them as saviors. Just because Boehner was bad, we shouldn’t praise them for criticizing him, or support someone like Webster just because he’s “anti-establishment.”

Now, I’d love it if a true immigration patriot like Dave Brat, (R-VA) Lou Barletta, (R-PA) or Steve King (R-IA) ran for Speaker. But none of them seem inclined to do so, and, unlike with votes on a bill, grassroots efforts do not have much effect on getting someone to run.

The best outcome: gridlock and a dirty prolonged fight. Because no Democrats will vote for a Republican, if 30 Republicans do not vote for McCarthy, then they will be deadlocked. I think immigration patriots in Congress should vote against McCarthy and focus the Speakership race on immigration as much as possible. If deadlock lasts long enough, then perhaps a better candidate will emerge.

For example: while he would not be as good as Steve King, Tom Price (R-GA) the current frontrunner for Majority Leader, is a consistent opponent of chain migration and the visa lottery with a career A grade from Numbers USA.

Even if we end up with McCarthy, the more he is attacked over Amnesty and the harder it is for him to become Speaker, the less likely he will be to go against his caucus and force Amnesty though over their objections.

If we are stuck with a new rascal, a scared rascal (like Boehner) is better than a confident one.