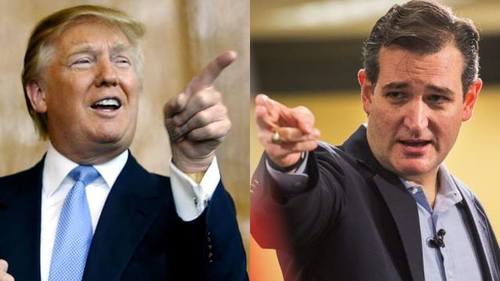 Whither the American Right: Cruz And “Movement Conservatism”—Or Trump And National Conservatism?

It’s a sign of Conservatism Inc.’s desperation that they are turning to Ted Cruz to stop Donald Trump. With Jeb! a joke, Christie floundering, Carson cratering, and Rubio’s “momentum” looking like wishful thinking by the consultants, even “Establishment” Republicans recognize they may need Ted Cruz, the Texas Senator who has been the bête noire of Capital Hill Republicans since he entered office, to save the Party and the “Movement” from Donald Trump. But the question for patriots outside the Beltway: is it more important to save the existing “Conservative Movement”—or build a new one to save the country?

Desperation can be seen in the speed with which Conservatism Inc.’s bigwigs are moving to consolidate behind Cruz. At the heart of this effort: the Religious Right organizations, spearheaded by Tony Perkins of the Family Research Council (like us, a “hate group” according to the $PLC). Perkins summoned dozens of conservative leaders to form a collective known as “The Group” to unite and marshal their support behind one candidate early in the primaries. After heavy debate, they choose Cruz over Rubio in a meeting at Northern Virginia hotel.

The impact was felt immediately on the 2016 campaign. Three prominent participants—direct-mail pioneer and longtime activist Richard Viguerie, the National Organization for Marriage’s Brian Brown, and The Family Leader’s Bob Vander Plaats—announced their support of Cruz within 72 hours of the meeting at the Sheraton.

[Inside the Secret Meeting Where Conservative Leaders Pledged Allegiance to Ted Cruz, December 14, 2015]

Cruz is counting on evangelicals to deliver him a victory in Iowa and is even trying to sap Donald Trump’s strength in the Deep South.

Refuting charges Cruz had favored some kind of an Amnesty/Immigration Surge and accusations of double talk from Marco Rubio (who would know), Sessions defended Cruz at a Saturday rally in Alabama, saying the Texas Senator was with Sessions “every step of the way” when fighting the Gang of Eight bill [Defiant Jeff Sessions on ‘Gang of Eight’: ‘Every Step of the Way, Ted Cruz was on my side, by Jeff Poor, Breitbart, December 19, 2015]

Sessions also squarely identified Marco Rubio as the man who “wrote” and “created” the Gang of Eight Bill—which will make it even more difficult for Rubio to squirm out of his prior positions [Ted Cruz, with Jeff Sessions at his side, toughens immigration stance during Daphne speech, by John Sharp, AL.com, December 20, 2015]

Cruz has also received the endorsements of former Congressmen Tom Tancredo and Steve King, neither of whom need any introduction to immigration patriots.

Yet the fact remains that Cruz has a checkered record on immigration. He undoubtedly advocated Amnesty in 2013, even if he ultimately did not support the Gang of Eight bill [Ted Cruz Jettisons 2013 Compromise on Immigration, by Jay Root and Patrick Svitek, The Texas Tribune, December 16, 2015]. More importantly, even now Cruz appears to be leaving a door open for a later Amnesty/Immigration Surge.

Obviously, Cruz’s recent moves towards Trump’s immigration stance arise from a purely political calculation. And Cruz dueling Rubio on the battleground of immigration does nothing to help the Texas Senator displace Trump, who is, after all, still the undisputed frontrunner.

Yet there is a strategy here. Cruz is, in his own words, trying to restore the “old Reagan coalition” [Exclusive: Ted Cruz Lays Out Pathway to National Victory on Grassroots Strength: ‘Reassemble That Old Reagan Coalition’ by Matthew Boyle, Breitbart, December 12, 2015]. Congressional Republicans and donors will grumble, but they’ll support Cruz over Trump as Cruz will “govern in line with congressional Republicans’ policy preferences [GOP leaders hate Ted Cruz, but he may be their last best hope, by Matthew Yglesias, Vox, December 14, 2015] Cruz is assuming that if the Beltway institutions unite around him, he can consolidate support (and funding) and edge out Trump by appearing the more “electable” alternative—all without attacking him.

The irony is that it is only because Trump has shifted the Overton Window, and also has destroyed much-touted rivals like Rick Perry, Scott Walker and (just about) Jeb Bush, that Cruz is even competitive.

Cruz has been a largely consistent Movement Conservative. But immigration barely appears on his “to do” list and there’s little evidence he sees the issue as important.

The fact is that Immigration patriots have long been trapped as simply part of the “Right wing” of the conservative movement. And being the “right of the Right” is a problem for three major reasons.

But Donald Trump has changed everything. He has created the potential for a different movement altogether. Not only is immigration at the center of his campaign, it’s part of a larger agenda that is genuinely different from the “movement conservatism” of Ted Cruz: While Cruz wants to rebuild the “old Reagan coalition” and simply turn out the evangelical vote, Trump wants to win back Reagan Democrats and build a new coalition of independents, blue collar workers, whites who had given up on the political process, and perhaps a surprising number of minority voters. And while Trump-style conservatism isn’t totally different from traditional economistic “Movement Conservatism,” there is far less rhetorical emphasis on “limited government” and moral issues and far more emphasis on nationalism, especially when it comes to trade and immigration.

In this respect, Trump (like Sessions) is advocating something more like the immigration-critical, pro-worker “National Conservatism” that has emerged in Europe.

Of course, considering the Beltway Right’s total failure in “limiting government” or promoting “traditional values,” it’s hard to see what practical difference Trump vs. Cruz really makes from a libertarian or Christian perspective. Even Cruz no longer speaks of reversing homosexual marriage.

Indeed, Trump isn’t a total clean break with the Conservative Movement. Ann Coulter is of course on board the Trump Train and legendary pro-family and conservative activist Phyllis Schlafly speaks warmly of The Donald. Former Constitution Party presidential candidate and Congressman Virgil Goode has also enthusiastically endorsed Trump and is working as part of Trump’s Virginia team.

The real divide on the American right today: between those who think a new approach, a new coalition, and new alliances are needed—and those who think that, if we can just get a “true conservative” like Cruz, it won’t be like all those other false dawns...this time!

But to borrow one of Marco Rubio’s more banal slogans for my own purposes: “This election is about the future.” And in an age dominated by questions of terrorism, immigration, and above all identity, it’s hard to see why the American Right should once again turn to an approach that’s been failing for decades.

After all, what good is a “conservative movement” that doesn’t think it’s important to conserve the American nation itself?