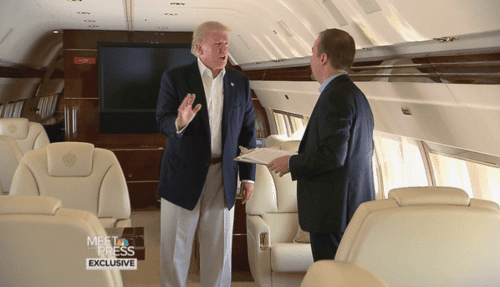 "They Have To Go"—Trump Shifts Overton Window Again

That sound you hear is the Overton Window shifting.

Donald Trump would reverse President Obama's executive orders on immigration and deport all undocumented immigrants from the U.S. as president, he said in an exclusive interview with NBC's Chuck Todd.

"We're going to keep the families together, but they have to go," he said in the interview, which will air in full on NBC's "Meet the Press" this Sunday.

Pressed on what he'd do if the immigrants in question had nowhere to return to, Trump reiterated: "They have to go."

For years, Beltway Right types have bemoaned illegal immigration as some kind of inevitable process. There's nothing we can do about it and we will only get in trouble if we point out the inevitable demographic and political changes, so why not change the topic to cutting taxes for the rich, or invading Iran, or giving people who export jobs tax breaks?

Well, perhaps in partnership with Senator Jeff Sessions, Trump is saying that at least those who were given Amnesty unilaterally by President Obama "have to go." This means that the Republican frontrunner has given those Americans who feel they are losing their country someone to support. If Conservative Inc. doesn't like it, they can urge other candidates to steal the issue, as Ann Coulter has urged.

Instead, I predict the Beltway Right will only increase its attacks on Trump. Which may just make him more popular.