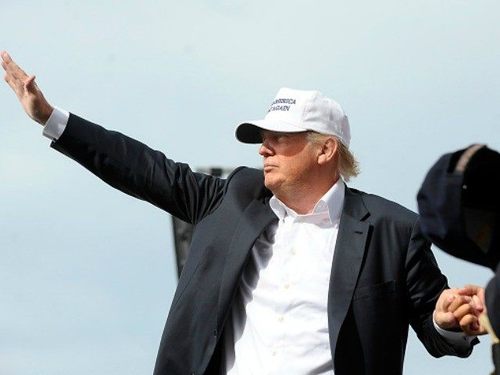 Virgil Goode is a staunch immigration patriot who is sorely missed in Congress and was the Constitution Party's nominee for President in 2012. Though newly independent Tom Tancredo is lining up behind Ted Cruz, Virgil Goode has climbed aboard the Trump Train. And central to his rationale is the National Question.

I am endorsing Donald Trump for President of the United States because he is the only candidate truly focused on reforming our immigration system.

Our legal and illegal immigration policies threaten our national security, common culture, fiscal integrity, and the wages and employment for the working and middle class.

Most Americans want to control immigration. However, Democrats support mass immigration for the votes, while the Republican Party refuses to fight back because it is beholden to business interests who support cheap labor. This “bipartisanship” leads to abominations like

Sen. Marco Rubio's  (R-FL) Gang of 8 bill, which would give amnesty to millions of illegal aliens and flood the country with tens of millions of foreign workers to undercut Americans.
Donald Trump has the means and the courage to stand up against open borders mega-donors such as Paul Singer and Sheldon Adelson, who want the GOP to abandon its base for their own financial interests.

Many other candidates give lip service to opposing illegal immigration and amnesty, but Donald Trump has the courageous plan to stop it. He will mandate E-Verify, build a wall on the Mexican border, and end sanctuary cities, welfare and birthright citizenship for illegals, which serve as magnets for illegal immigration. Also as important, Trump will reform our legal immigration policy to put American workers first.

Goode also praises Trump's stances on other issues, notably trade. And this may be the key to one of Trump's greatest assets, his appeal to blue collar voters.

There are signs that Trump’s strategy is working.

Polls show that the bulk of Trump’s support comes from men who lack a college degree and make less than $40,000 a year, the kind of workers who once formed the backbone of the U.S. manufacturing economy. They have helped propel Trump to the top of popularity rankings in South Carolina, a key early primary state, where he is outpacing rival Ben Carson.

“Some of the Republicans get so tied up with free trade,” said Lee Cole, a Republican attorney from nearby Williamston who attended Trump’s event. “Over the past 20 years, we’ve lost all of our manufacturing jobs,” Cole said of his hometown. “Anything that talks about getting some of that back I think really resonates well here.”

Goode represents the kind of patriotic, populist, nationalist strain of the Old Right that has been all but purged from the modern GOP. His support of Trump is a sign this faction of the Dissident Right may be finding a new home in Trump's big tent.