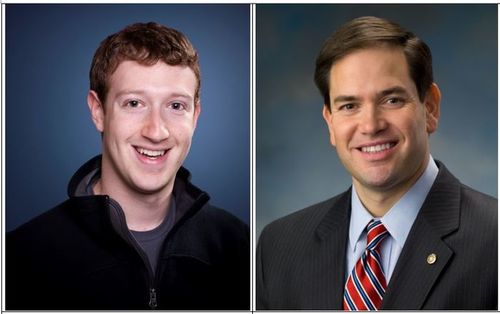 You can read the lips of the candidates till the cows come home. But you'll get to the truth much faster when you learn where pro-amnesty power brokers have placed their bets and hitched their wagons.

Rubio's brazenly fraudulent campaign to paint Cruz as soft on illegal immigration is a flabbergasting attempt to distract from the Florida junior senator's faithful allegiance to the open-borders donor class.

Here's what you need to know:

Facebook, Microsoft and Silicon Valley back Marco Rubio. Mark Zuckerberg is a social justice CEO who panders to Hispanics with his pro-amnesty, anti-deportation advocacy; Facebook is an H-1B visa dependent company working hard to obliterate hurdles to hiring an unlimited stream of cheap foreign tech workers. It's no coincidence that Facebook's lobbying outfit, FWD.us, was waging war on Sen. Cruz online this week in parallel with Sen. Rubio's disingenuous onstage attack.

The D.C. front group, which Zuckerberg seeded in 2013 with nearly $40 million during the Gang of Eight fight, has consistently provided political protection for Rubio as he carried their legislative water.

FWD.us's GOP subsidiary, "Americans for a Conservative Direction," showered Rubio and pro-illegal alien amnesty Sen. Lindsey Graham, R-S.C., with millions of dollars in media ad buys. The group also funded a deceptive, $150,000 ad campaign for immigration sellout Rep. Renee Ellmers, R-N.C., which falsely claimed she opposed amnesty to help her fend off a primary challenge. In all, FWD.us spent an estimated $5 million on TV and radio spots in more than 100 GOP districts before the Senate passed the Gang of Eight bill in June 2013.

Zuckerberg personally donated to Rubio, as have pro-H-1B expansionist Silicon Valley CEOs from Oracle, Cisco and Seagate. Microsoft, founded by leading H-1B/amnesty cheerleader Bill Gates, has been Rubio's No. 2 corporate donor the past five years.

Paul Singer backs Marco Rubio. The hedge fund billionaire announced his support for Rubio in October. Amnesty is and always has been a top agenda item for Singer, who helped fund the National Immigration Forum along with fellow hedge fund billionaire George Soros. NIF propped up a faux "grass-roots" initiative of religious conservatives, dubbed the Evangelical Immigration Table, to lobby for the Gang of Eight.

The Singer/Soros-funded NIF helped sabotage the Immigration Act of 1990, which was intended to impose modest restrictions on immigration, and turned it into "one of the most expansionist immigration bills ever passed," as one expert put it. On Capitol Hill, Swartz worked closely with immigration expansionist Sen. Spencer Abraham's legislative director Cesar Conda and Sen. Sam Brownback's legislative director (now GOP House speaker) Paul Ryan—who is busy this holiday season fronting an omnibus bill that will open the floodgates to 250,000 unskilled foreign guest workers.

Side note: Beltway establishment fixture Conda previously worked for the pro-amnesty U.S. Chamber of Commerce and mentored Ryan from the age of 19. Conda guided newbie Rubio as his Senate chief of staff from 2011-2014 and remains his powerful immigration Svengali behind closed doors.

In 2013, the group dumped more than $750,000 into primetime, Fox News Channel ad buys pushing the Gang of Eight immigration bill, including $100,000 in ads to support leading GOP voices for amnesty, including, you guessed it, Sen. Marco Rubio.

Open-borders Democrats love Marco Rubio. As Sen. Schumer brayed last month: Rubio "was not only totally committed, he was in that room with us. His fingerprints are all over" the Gang of Eight monstrosity. Indeed, Sens. Durbin and Rubio plotted strategy during early morning workout sessions at the Senate gym.

Rubio hired Enrique Gonzalez, a Democratic donor and partner with the global immigration law firm, Fragomen Del Rey, to be his chief adviser on the bill. Gonzalez specializes in obtaining H-1B guest worker visas (tripled in the Gang of Eight bill) and EB-5 visas for wealthy foreign investors. After the bill passed, Gonzalez returned to his law firm as managing partner of the Florida office, where he brags about his role as Rubio's "special counsel" and "principal advisor/negotiator"—read: bill writer.

Cruz kept his promise to voters. He voted against the Gang of Eight giveaway. Period.

Rubio broke his promise: He paid lip service to border security and the American Dream, while scheming with Sens. Schumer and Durbin on the 180,000-word, 1,200-page Christmas tree for Big Biz, Big Tech and ethnic lobbyists.

Rubio didn't just vote for the bill. He and his staff were integral to crafting it, shilling for it, and cashing in on the legislative boondoggle dubbed a "permanent pension plan for immigration lawyers."

When you need the truth about which Beltway crapweasels are selling out America, always follow the money.