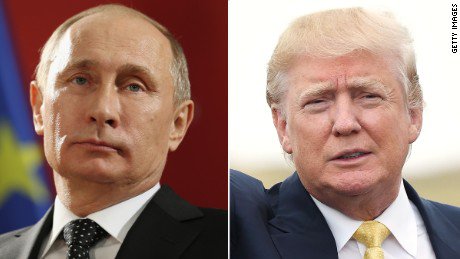 The Kirkpatrick Corollary on Russia: Republicans Who Fawn On Mexico Want To Fight Putin

Earlier this week, Ann Coulter perfectly described the limp-wristed Republicans (one in particular) who won't fight the Left at home or protect their own country's borders but are eager to appear butch when it comes to other countries.  She wrote:

It’s as if there’s a law of toughness conservation: The weaker a candidate is on protecting our borders, the more aggressively he talks about bombing foreign countries, a move known as “the Lindsey Graham.”

Call this the Kirkpatrick Corollary. The weaker a candidate is on protecting our borders (or on protecting anything else important), the more fervently they demand the United States embark on an idiotic confrontation with Vladimir Putin and Russia.

Vlad had the following to say about Donald Trump the other day.

Putin offered high praise for the billionaire businessman-turned-Republican presidential front-runner on Thursday during an annual news conference with reporters.

And in remarks closely mirroring Trump's assessment of the campaign, the Russian leader called Trump "the absolute leader of the presidential race," according to the Russian TASS news agency.

Trump had a measured response. After all, this wasn't an endorsement, but simply a compliment.

"It is always a great honor to be so nicely complimented by a man so highly respected within his own country and beyond," Trump said in a statement released by campaign spokeswoman Hope Hicks. "I have always felt that Russia and the United States should be able to work well with each other towards defeating terrorism and restoring world peace, not to mention trade and all of the other benefits derived from mutual respect."

As you might expect, the #cuckservatives who are eager to defend the honor of Turkey and Saudi Arabia and who want to keep on funding "Syrian rebels" who turn out to be ISIS went nuts. Mitt Romney in particular defended the honor of Barack Obama, whom Trump accused of killing people the same way Putin allegedly does.

But let's go a step further.

If you are an average conservative American living in a normal community, whose policies are more likely to hurt you and your family, Barack Obama's or Vladimir Putin's? For that matter, Putin or John McCain?

During the Vietnam War, Muhammed Ali famously said, "No Vietnamese ever called me N***er." Well, no Russian government official ever called me a "bigot" who needed to be replaced by Mexicans. Only members of my own political party did that.

Russia is not our foe. It should be our ally [The North Worth Saving, by Srdja Trifkovic, Orthodoxy Today, February 21, 2009] And Lindsey Graham is far more of an enemy of the historic American nation than Vladimir Putin will ever be.

One can only wonder whether the likes of Graham have been bribed, blackmailed, or are simply evil. The most horrifying explanation is that they really are that dumb.