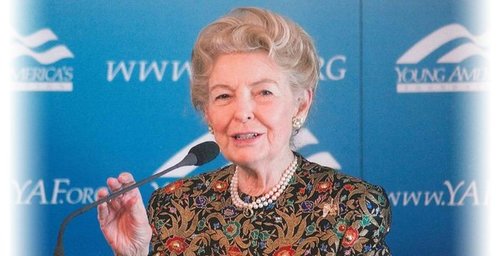 Phyllis Schlafly On The Importance And Value Of Trump 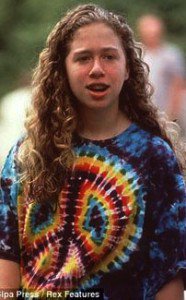 In My neighborhood U paid Chelsea $65K! (World Net Daily, July 1, 2015), Jack Cashill contrasts Chelsea Clinton with Phyllis Schlafly.  His highly readable comparison is relevant (both women do public speaking) and stark — not only is Clinton a prima donna and with zero justification, Schlafly is down-to-earth and a fount of accomplishment.

The 90-year-old Schlafly, whose best-selling, self-published book A Choice, Not An Echo (1964) was ultimately an important marker on the road to the Reagan presidency, continues to engage in the national political conversation, both via her organization (the Eagle Forum) and her frequent columns at Townhall.com.  Her latest column [Donald Trump Shakes Up the 2016 Campaign, July 14, 2015] focuses on the enormous price randomly-selected Americans pay for our feckless border regime.  After noting that the currently-notorious Steinle case in San Francisco validates Donald Trump's warning about the low quality of many human imports from Mexico, Schlafly offers up four other very fresh cases of lethal mayhem created by Hispanic illegal aliens who had illegally re-entered following deportation.

But more than the up-to-date information on little-publicized (in-the-shadows!) cases of illegal aliens behaving vilely, I was struck by Schlafly's three concluding paragraphs:

Addressing nearly 10,000 people at the Phoenix Convention Center on Saturday, Donald Trump turned over the microphone to Jamiel Shaw Sr., who told the crowd how his 17-­year-­old son was cut down by an illegal alien’s bullets while walking home in Los Angeles in the early evening of March 2, 2008. Jamiel Jr. was a rising scholar-­athlete being recruited by Stanford when Pedro Espinoza shot him. The bullet to the head that killed Jamiel Jr. also penetrated his hand, leading his father to suggest that his son’s last words were "hands up, don’t shoot."

Most of the Republican establishment, including Mitt Romney and Jeb Bush, have rushed to denounce Trump for raising the issue of criminal aliens from Mexico living in "sanctuary cities," or at least to tone down his rhetoric. Among Republican presidential candidates, only Sen. Ted Cruz and Dr. Ben Carson have welcomed Trump, with Dr. Carson saying "We need to discuss these things openly. I like people who are willing to say what they believe."

Dr. Carson, who previously fought back against a scurrilous accusation by the notorious Southern Poverty Law Center and forced it to apologize, often says that "political correctness is destroying our nation." When I evaluate a candidate, the ability to resist liberal pressure is the most important character trait. Trump and Carson are among the few who pass that test.

The sentence of Schlafly's that I've bolded is key.  It's the point that's apparently been missed by the boys at National Review Online, who are falling all over themselves to most vehemently condemn or dismiss Trump.