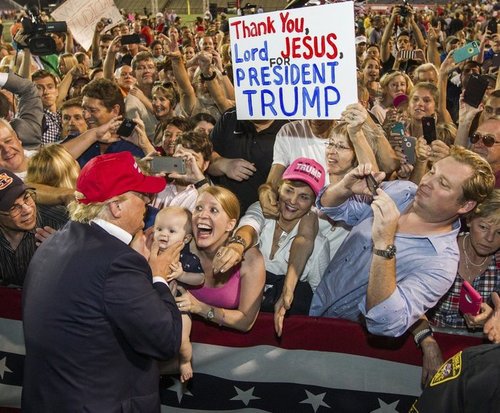 Congratulations to the alert staff of The Daily Caller. On Friday, before his spectacular rally in Mobile Donald Trump gave an interview to an Alabama radio station and opened an entirely new front – in my view, his most important policy initiative since his wonderful immigration paper was posted last Sunday. Donald Trump: ‘I Go Out Of My Way To Use The Word Christmas’ [VIDEO] by Alex Pappas 8/21/2015 reports

Trump is quite right about shopping venues of course but most Americans will not appreciate what a radical statement this is for a New Yorker. There Christophobic forces have even managed to exploit a compliant Court system to have menorahs and crescents displayed in the public schools system while banning Nativity scenes. See War Against Christmas 2006 Competition [II]: No War Against Christmas? Tell That To The Grinches of Gotham! and The War Against Christmas 2010: The Skoros Scandal—And How Congress Can End The Kristmaskampf

Of course the War Against Christmas has always been a key interest of VDARE.com – indeed VDARE.com editor Peter Brimelow has some claim to have started the counter attack on Christmas suppression at the National Review in 1995.

It is a popular cause and Trump will do well with it. But the other side has always responded with utter hysteria, hatred and denial.

What this tells me is that The Donald has turned his back on the community amongst whom he made his fortune. They will not forgive him.

The conclusion must be that he is ABSOLUTELY DEAD SERIOUS about running for President.

As I write this I see according to Google News no MSM outlet with the arguable exception of Breitbart has picked up the Daily Caller’s Friday story.

The MSM believes ignorance is best for the Serfs.