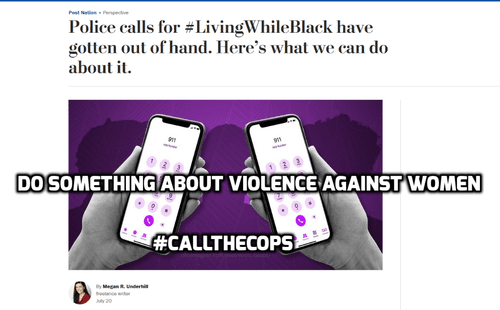 What Happened When I, A “Racist” White Man, Called the Cops on a Black Man

This summer, a new cry for justice emanated from our Anti-White Main Stream Media: whites are to no longer call the police on blacks. White women, in particular, are being told to never do this—it is a new front of the MSM’s war on white women.

Allegedly, whites generally call the cops on blacks for superfluous offenses, and perhaps subconsciously, they are dialing 911 in hopes that police will arrive and shoot whatever blacks are in the area with impunity. All of this is racist and damaging to blacks, so whites must stop, it is a moral imperative. Here are some headlines:

As a regular contributor to most every one of America’s foremost “racist” publications (VDARE.com, American Renaissance, The Occidental Observer, Taki’s Magazine, Social Matter, Counter Currents), I think there is value in letting the world know why, nevertheless, a racist monster such as myself recently did indeed call the cops on blacks—and why I plan on continuing to do so whenever necessary.

I live and work in a major American city with a very large black population. For my job I regularly go to a Post Office. Its employees are all black women, except for one Asian woman, who I believe is Indian. The clientele is like the city it serves: very mixed—plenty of whites, plenty of blacks, and not a few Asians and Hispanics of various types.

About a month ago as I walked from my parking spot to the front door I heard a terrorized female voice scream “N----r, get the f---k off me!” Then a very angry, very deep male voice, “Bitch I’ma f-----g kill you!”

I looked around and saw a parked car with the driver’s door flung open. Inside was a black woman sitting in shotgun and a black man leaning towards her from an awkward position in the driver’s seat. He was repeatedly punching her. Every third punch or so he would yell, “Bitch I’ma f-----g kill you!” She always responded, “N-----r,  get the f--k off me!”

If you have never witnessed a woman getting pummeled, let me assure you that it is quite unsettling. Not unlike a baby’s cries, it is impossible to tune out; both are very aggravating as well—but it is a kind of aggravation that makes you feel strangely sympathetic to the source of the noise.

I looked around the parking lot to discover there were quite a few people (of many different races) gawking at the scene. To my disgust, nobody was on the phone, doing the obviously necessary thing of calling the cops so this guy would stop beating the stuffing out of this woman.

Not wanting to make it obvious I was calling the cops—I did not want the attention of this guy—I hurried inside the post office. When I stepped inside I discovered that the woman’s cries of pain were quite audible from inside, and that the post office was filled with people (of many different races) looking out the windows to get a glimpse of the action, and staying quiet to better hear the cries. To my further disgust, no one in this multiracial crowd was on the phone.

So I called 911, and, in the city’s ongoing attempt to convince me America is becoming part of the Third World, I was put on hold. I even got that generic message that goes, “Please stay on the line, your call is important to us. Your call will be answered by the next available agent.”

When I was put through to an operator, a very obviously black female voice asked, “What’s the nature of your emergency?” “Hi, yeah, I’m at the post office on [redacted] street, and there’s this dude in the parking lot and he’s beating the sh*t out of a woman, I think it’s his girlfriend.”

The operator asked me to describe the two people, and I told her they were both black.

Just then, the woman in the car managed to get her door open and hustled out of the car. She took off running down the street. The man then got out of the car, ripped his shirt off, yelled something vulgar at the woman, and then slowly did a 360 degree turn in place, looking at all the gawkers he had attracted.

When he faced the post office, he and I made eye-contact through the window, me with my phone pressed to my face. He knew who I was talking to, and I knew that he knew. My heart skipped a beat and I nervously looked around the post office, only to discover that now every customer was staring at me. The man and I locked eyes again, and then he hopped back in the car and peeled out of the parking lot.

“Um, operator, the lady managed to get out of the car and just took off running down the street. The dude just got into his car and sped away.”

“So has your emergency ended?”

“So he is no longer assaulting the woman?”

“Technically, yeah, but I really think the assault is just gonna restart, like, a little further down the block.”

“So your emergency at the address you’re calling from has ended?”

“Yeah, but I really think you should send a squad car or two down here to try and find the chick, or at least to scare away the guy.”

“Sorry, sir, I have other calls to take.”

And with that, the phone call ended.

The reactions of the 911 operator and all the gawkers who were simply letting this go on revolt me. If any man is beating the crap out of any woman at a public place in broad daylight, the police should be called. There’s no gray area here. The situation was, if you will, black and white. While I do not especially like black people, there was no reason to let that poor woman get pummeled. It is abhorrent that we live in a society where some thirty people just stood around and dumbly watched all of that while making no move to stop it.

The only person out of that multiracial crowd who did anything to protect that black woman was the only white guy there who counts Jared Taylor as a personal friend.

The upside to all of this for me personally was that one of the black female employees of the post office very vigorously thanked me for having called the cops. Ever since that day, she has been very friendly towards me, and gone out of her way to help me with this or that issue I am having—which was decidedly not the case before.

Every other person who was in that post office when all of this happened could be receiving equally superb customer service, if they just had not been such contemptable cowards and called the cops on black people.

Moral of the story: call the cops. The campaign to do otherwise is truly a new low of our loathsome chattering class.