Jason Spencer at some level knew this, which was why he was carrying a gun with him as he went on a walk with his wife. 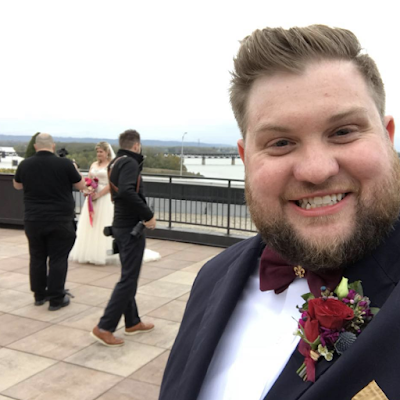 Jason Spencer, with his wife in the background, was gunned down while going on a walk in a 93 percent white neighborhood in Louisville by black teens.

They had been married only nine days prior.

What we do know is Jason Spencer - a white male - is now dead, murdered by black males in 22 percent black Louisville. Not just black males, but four black teens.

A fourth juvenile suspect, who is 13 years old, has been arrested in connection to Sunday's homicide in Cherokee Triangle.

The three other suspects, all 15 years old, were taken into custody this week. They are all charged with murder, robbery and theft by unlawful taking (auto) in connection with the case, police spokesman Dwight Mitchell said Saturday.

Jason Spencer, a Humana employee and creator of the Louisville Humor Twitter account, was killed while walking with his wife. Police spokesman Dwight Mitchell called the incident a "botched robbery attempt" earlier this week.

A police statement on Tuesday said Spencer had a gun and returned fire at the suspects.

The first suspect was found shot Sunday near the intersection of 11th and Hill streets in the Park Hill neighborhood. Two other suspects were taken into custody Thursday.

Police have not said whether they expect additional arrests in connection with the homicide.

The homicide in Cherokee Triangle prompted alarm from neighbors, leading to more police patrols in the Highlands neighborhood, according to a newsletter from the district's councilman.

"Murder and violent gun crime in the Highlands are rare, so, naturally, District 8 is shocked, saddened and scared right now," Councilman Brandon Coan said in a newsletter to constituents Tuesday night.

This year, there have been 99 homicides in Jefferson County. Last year, LMPD handled 118 criminal homicide investigations, the most in its 14-year history.

Spencer's death marked the first murder in Coan's District 8 since December 2015 and the seventh since 2011, according to Coan.

The Highlands community in Louisville is 93 percent white.

One writer for the Louisville Courier-Journal is upset police are dedicating more resources to the Highlands community, when black people are killing each other at shocking levels in the city. One problem: white people actually demand police stop crime and arrest criminals, whereas black people protect their criminals through a policy of 'no snitching' only ensuring crime rates increase in their community. It seems this writer took great interest in pointing how white the Highlands area is and how disappointed he is in seeing police resources squandered on being deployed there.

We're finally cracking down on murders — in the Highlands. Gimme a break,  by Joseph Gerth,Louisville Courier-Journal, November 1o, 2017

It's about time that the Louisville Metro Police Department did what it should have done a long time ago to deal with the city's soaring murder rate.

Focus on the city's rampant murder problem; beef up patrols; send in more officers and stop the senseless killings that have turned the streets of one community into a killing field.

I speak, of course, of the Highlands.

You obviously don't get it.

Don't get me wrong. The death of Jason Spencer, in a gunfight after several teenagers allegedly tried to rob him and his new wife last weekend, was a tragedy.

And specialized units that deal with gangs, drugs and violent crimes are more likely to spend their time in some of the higher-crime areas of Louisville's West End.

But the optics of shifting officers' duties in a low-crime, predominately white area while black bodies are stacking up like cordwood just a few miles to the west sends the wrong signal.

It says that those who worry after they hear gunshots in their neighborhood for the first time after two long years of peace matter more than those who hear it most every night.

Last week, we learned the elite in control of America believe it's not okay to be white.

Jason Spencer, a white male living in an area of Louisville where more than 9 of 10 residents are white, found out just how little it matters to be white in America.

Having gotten married on nine days prior to his murder, Spencer was gunned down by black males (teens) while out for a walk after just returning home from their Disneyland honeymoon.

Just another white male murdered by blacks in America, with virtually no media interest outside of the city where it happened. And even in Louisville, writers for the Gannett-owned paper are upset additional police resources are going to help make predominately white areas of the city (you know, areas of Louisville where actual taxpayer live) safer after a white male was gunned down by black teens while walking with his new bride.