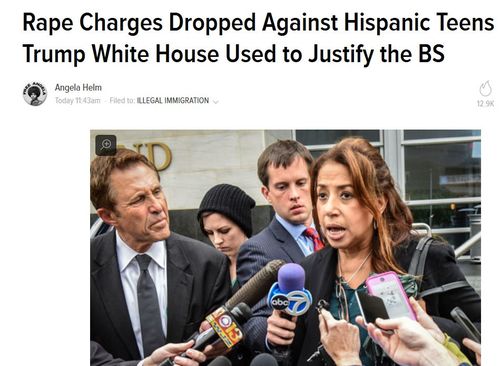 The same media that slavishly ignored the alleged rape of a 14-year-old girl by two illegal immigrants in Rockville, Maryland, spent last week crowing about the prosecutor's refusal to bring charges.

It turns out that illegal aliens gang-raping a 14-year-old girl in a bathroom stall is not a statutory rape because ... the girl had previously sent one of her assailants prurient text messages.

Somebody better tell the college campuses. 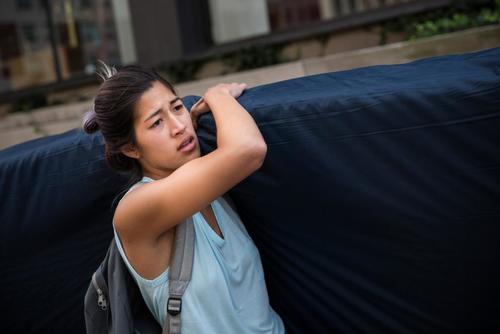 Columbia University's Mattress Girl, Emma Sulkowicz, became an international cause celebre after alleging rape against a fellow student to whom she'd sent dozens of desperate and salacious messages—including, most memorably, "f—k me in the butt," and "I wuv you so much."

She'd also had consensual sex with him several times, only one of which she deemed "rape."

Sulkowicz's "f—k me in the butt" texts were no impediment to her becoming the face of silenced rape victims on campus. She was sympathetically profiled everywhere; Sen. Kirsten Gillibrand invited her to Obama's 2015 State of the Union address; and she dragged a mattress around campus with her as her senior thesis project ...

"... a succinct and powerful performance piece ..."—The New York Times

In its lavish coverage of our brave mattress-toting heroine, the Times reminded readers: "False reports of rape are rare, many experts say." In fact, according to the FBI, there are more false rape claims than false reports of any other crime.

That's why normal people like to look at the facts. For example, how long did it take the alleged victim to report the rape? How sophisticated is she? Is the story plausible? Did the accuser have any other motive to cry rape? And is there any record of her begging the suspect to sodomize her?

Mattress Girl waited seven months to report her rape—even then, only to college administrators, not the police. In the intervening months, she strenuously, albeit unsuccessfully, pursued a relationship with her alleged rapist.

Rolling Stone's "Jackie" never reported her apocryphal rape, explaining to The Washington Post that after allegedly being violently gang-raped, she was "unaware of the resources available to her." (Heard of 911?)

By contrast, the 14-year-old girl in Maryland emerged from the bathroom stall and immediately reported her rape to the police.

According to the police report, she had run into her friend, 17-year-old Jose Montano, and his friend, 18-year-old Henry Sanchez-Milian, in a school hallway. (The 17- and 18-year-olds are both in the 9th grade. We really are getting the best illegal immigrants!) She knew Montano, but not Sanchez-Milian. Montano hugged her, slapped her buttocks and asked her to have sex with both men.

She says she said no—something generally missing from the corpus of cases making up the "campus rape epidemic."

Montano and Sanchez-Milian then forced her into a boys' bathroom, according to the report, where she grabbed the bathroom sink to stop them from dragging her into a stall, repeatedly saying "no." In the stall, the illegals took turns holding her down, as they penetrated her orally, vaginally and anally. As she was screaming, they yelled at one another in Spanish.

Although there was no hard evidence, like the victim dragging a mattress around for a year, police investigators did find blood and semen in the bathroom stall.

If even one story on the left's via dolorosa of campus rape had allegations like these, the accuser would be on a postage stamp, have laws named after her, and she'd be the one giving the State of the Union address. She'd be having lunch with Lena Dunham, Emma Watson would play her in the movie, and Lady Gaga would write a song about her.

Instead, because the accused rapists ("Dreamers," as I call them) are illegal aliens, the media want to submit their names for sainthood. The prosecutor, Montgomery County State's Attorney John McCarthy, [Email him] wants to know how short the 14-year-old's skirt was.

McCarthy dropped rape charges against both suspects, reportedly on the grounds that the girl had previously sent nude photos of herself to Montano. This, the prosecutor interpreted as consent to have multi-orifice sex in a bathroom stall with him, as well as any of his friends.

Can we get the pre-consent-by-text rule written into college guidelines on sexual assault?

However risqué her texts were, can't a girl change her mind? Evidently, she thought it was rape when she emerged from the bathroom, inasmuch as she promptly notified authorities. Isn't it possible she also thought it was rape as it was happening, an hour or so earlier?

There's also the fact that she's 14 years old! Her alleged rapists are 17 and 18. Under about 700 years of Anglo-Saxon law, that's statutory rape. (Statute of Westminster of 1275.) Apparently, diversity—in addition to being a "strength"—requires us to jettison our statutory rape laws.

This is the case the media are howling with glee about—demanding that President Trump apologize for even mentioning it.

The New York Times and Washington Post both editorialized about Trump's "reflexive immigrant-bashing" -– after first telling their readers about the alleged rape that neither paper had bothered reporting when it happened.

CNN—which also didn't mention the Rockville case until charges were dropped—is in a state of high dudgeon at Trump for citing the rape.

Erin Burnett announced: "Tonight, the White House not backing down, refusing to retract its comments on an alleged rape case used—that they used as an example of why the United States should crack down on illegal immigration."

Correspondent Ryan Nobles raged that White House Press Secretary Sean Spicer referred to what happened to the 14-year-old girl as "tragedies like this."

"Tragedies!" This milquetoast, boring American girl got to experience diversity, up close—vaginally, anally and orally—AND THE WHITE HOUSE PRESS SECRETARY CALLS THAT A "TRAGEDY"?