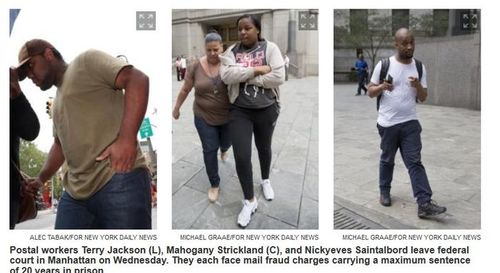 Once again, the criminal tendencies of blacks tempered by their lower average IQ leads to another absurd crime. (One is reminded of the Haitian cop who stole a decedent's credit card and purchased a diamond ring.) 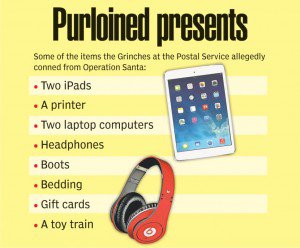 What sort of moron engages in such petty (and mean-spirited) theft where the potential sentences are so high and the probability of being caught virtually certain? I know it's only a Post Office gig, but that has been the standard sinecure for unemployable blacks for decades.

Are any of them familiar with the notion of a "cost-benefit analysis"? Or do they steal for the solely for the sake of thinking they are getting over on The Man?

James Fulford writes: I'm running this letter because it shows that except in the  rare case of horrifying crimes by white people, as happened in Charleston, no crime story mentions race. The Daily News, because it's a tabloid, does run pictures of the accused, but you have to scroll way down past pictures of iPads and Santas to see the picture of the accused that I've put at the top of this post, and there's no mention of it in the text at all.