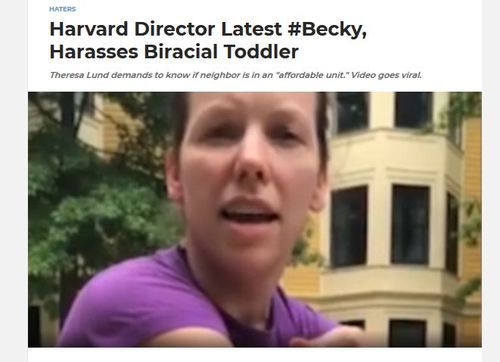 The Media’s War On Beckys

From DiversityInc, a website for corporate diversity industry professionals:

In what seems to be an ongoing saga of white people not minding their business, #SidewalkSusie, offensively, interfered with mom, Alyson Laliberte, and her child while the toddler played outside of their Cambridge home.

See my new Taki’s Magazine column for why these kind of incredibly trivial neighborhood tiffs have recently been designated National News.

For example, from the New York Times:

White People Are Noticing Something New: Their Own Whiteness

A few weeks later, a white woman named Michelle Snider confronted and filmed another white woman who called the police on a couple of black men for using a charcoal grill at an Oakland park. The caller’s image … became a meme, #BBQBecky, showing up on “Saturday Night Live” and being dropped into stills from “Black Panther,” Barack Obama’s inauguration and a black Last Supper. …

Chief among our remarked-upon habits is our often-claimed colorblindness and affinity for individuality, a supposed indifference to race that often reads more like ignorance of it. A “Becky,” as in #BBQBecky, Damon Young explained in a piece on The Root, is a type of white woman who “exists in a state of racial obliviousness that shifts from intentionally clueless to intentionally condescending.” (Like the original ur-Becky in the intro to Sir Mix-a-Lot’s “Baby Got Back.”) White people are referred to in proliferating slang: “wypipo,” “whytppl,” “WhitePeople™.” The spaces we unthinkingly dominate are “white spaces.” The indignant defensiveness we may display when confronted by racial conflict is “white fragility.” White people are losing the luxury of non-self-awareness, an emotionally complicated shift that we are not always taking well. “Twenty-five years ago black people were the lost population,” and “black intellectuals were on the defensive,” Darryl Pinckney observed this month in The New York Review of Books. “Now white people are the ones who seem lost.”