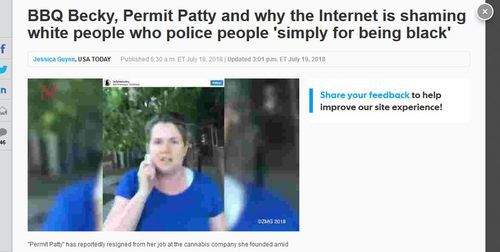 USA Today: "BBQ Becky, Permit Patty and Why the Internet Is Shaming White People Who Police People 'Simply for Being Black'"

BBQ Becky, Permit Patty and why the Internet is shaming white people who police people ‘simply for being black’

SAN FRANCISCO — It’s now a weekly, if not daily, occurrence: A video is posted on Facebook or Twitter showing a white person calling police on black people for minor violations or nothing at all, a new form of social media shaming that’s exposed the everyday racism black Americans face and brought swift repercussions for the perpetrators.

Tagged with nicknames like BBQ Becky and Permit Patty, white people who’ve reported black people for sitting in Starbucks, shopping at CVS, mowing lawns, playing golf, staying at an Airbnb or napping on a couch in a college dorm are being publicly named, mocked and, in some cases, fired from their jobs.

White people have been policing black behavior for a long time. If they think someone black seems out of place, they know they can say something to the property manager, a store supervisor or the police, sociologists who study race say. Many black people in these situations don’t bother to complain publicly. They say they’re unlikely to be believed or their concerns will be dismissed. And they don’t want to escalate the situation and end up in jail or worse.

Now footage captured on smartphones and spread instantly on social media is shining the spotlight on how black people are singled out “simply because they are black,” says George Yancy, a professor of philosophy at Emory University and author of “Backlash: What Happens When We Talk Honestly about Racism in America.”

C’mon, Professor Yancy: “Backlash?” That’s pretty boring compared to some of your other titles like “Black Bodies, White Gazes,” “Look, a White! Philosophical Essays on Whiteness” and “Pursuing Trayvon Martin.” Whatsamatta with “Blacklash”? I don’t know what blacklash means, but I’m sure you’d think of something.

Here’s Yancy’s classic interview in the NYT of animal rights philosopher Peter Singer, who appeared to have been under the mistaken impression that he was going to be interviewed about his theory of “speciesism,” but Yancy turned every question from speciesism to what Yancy is interested in, which is, surprise!, racism.

The current firestorm was set off in May by a white woman, Jennifer Schulte, who was rechristened BBQ Becky after she called police on two black men for using a charcoal grill at a public park in Oakland, California. The police eventually advised the men charcoal wasn’t permitted in that part of the park …

People often think of racism as major acts of aggression, but sociologists say smaller scale acts, sometimes referred to as microagressions, are more common. They can include everything from disapproving looks to chastising remarks for perceived infractions of racial etiquette, social norms dating back to slavery days and Jim Crow laws on racial segregation that dictated how black people should behave in public and interact with white people.

The way white people caught in these videos on social media lay claim to public places amount to individual acts of gentrification, sending the message: This is my space and you can only behave here the way I say you can, Yancy says. …

We are always hearing from Raj Chetty about how black people happen to live on all the Tragic Dirt and need to be moved to the Magic Dirt. But blacks, outside of the rural south, aren’t exactly American Indians stuck on remote, eroding reservations. Instead, blacks tend to live in conveniently located urban locales, from which their ancestors drove out the whites via street violence. So they like where they live.

Also, I suspect that a lot of white people have a self-interested reaction to these videos shaming white women. As I’ve often noted, the biggest real estate hot potato in America are poor blacks. Nobody wants this hot potato dumped in their laps. So white people in the rest of the country react negatively to white gentrifiers in Oakland or Cambridge trying to push out local blacks and dump them on somewhere else. Of course, nobody is allowed to express this sentiment or even explain the logic of it, so it gets channelled into a lot of white-on-white hate, for which it is always open season.

America has a legacy of racism going back hundreds of years, so what’s giving people new license to confront blacks and other minorities in public spaces?

John Powell, who leads the UC Berkeley Haas Institute for a Fair and Inclusive Society, blames President Trump’s rhetoric on race and immigration …

My column in Taki’s Magazine this week, “What’s Your Type?,” remains, as far as I can tell from searches, the only application of the simple concept of Type I vs. Type II errors to the current era of racial hatred directed toward white women.

What if the current War on Becky is part of Putin’s Master Plan to accelerate the centrifugal forces with the Democrats’ Coalition of the Margins?