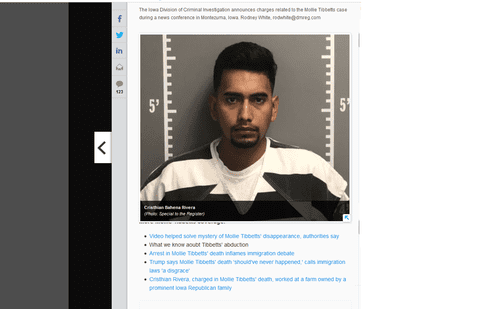 Mollie Tibbetts Case: Finally, a Becky Gets What's Coming to Her for Threatening to Call the Cops on a PoC

According to the national media, such as Slate and the New York Times, America is plagued in 2018 by Beckys wielding their White Privilege to call the authorities on People of Color. At last, one PoC has stood up to the Becky Menace and taken action with righteous wrath!

From the Des Moines Register:

GUERNSEY, Ia. — An undocumented immigrant is in custody, charged with first-degree murder in the Mollie Tibbetts investigation, authorities said.

Cristhian Bahena Rivera, 24, has been in the area for four to seven years, officials said. …

Officials pulled him in for questioning Monday where he admitted “making contact with a female running in Brooklyn [Iowa, not NY]” and that he pursued her to an area east of town in Poweshiek County, according to the criminal complaint.

He then told officials that he “got mad”

And who wouldn’t, what with all the stories in the news lately about “BBQ Becky” and “Permit Patty” calling the authorities on PoCs?

and panicked and blocked his memory, which happens when “he gets very upset,” according to the criminal complaint….

He then realized he had earpieces in his lap, which made him realize that Tibbetts was in the trunk …

Don’t you just hate it when you notice there’s a human being in your trunk and you can’t remember why? It’s like a scene from Memento or The Hangover.