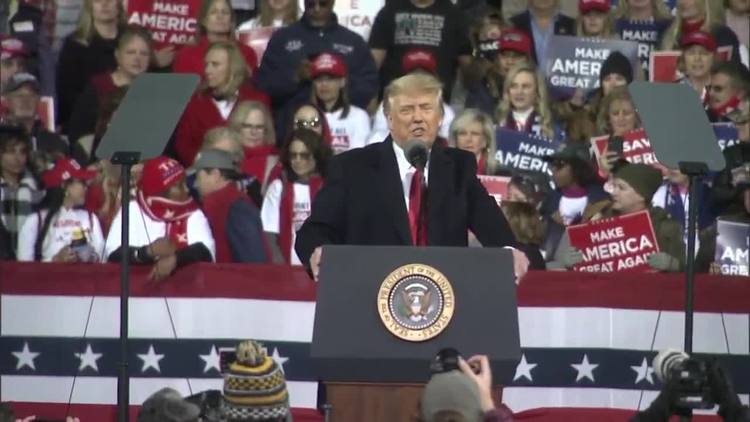 Previously: Karl Rove Is Back! And Just Might Lose Georgia For GOP If Senate Candidates Don’t Campaign Against Biden’s Threatened Amnesty

In his first post-election rally on Saturday in Valdosta GA, President Trump tried his best to please his base and the GOP Congressional Establishment as well. It’s tricky, because the two sides diverge. The crowd ordered another serving of 2016’s red meat; Trump delivered with an attack on the Democrats and Biden’s plan to open the borders, Democrat opposition to Law and Order and the party’s embrace of the Marxist Antifa and Black Lives Matter movements. Pleasing the Establishment, he also focused on the U.S. Senate runoffs and why Republicans must vote for candidates Kelly Loeffler and David Perdue. But judging from the angry enthusiasm for him, Karl Rove and the GOP/ GAP had better take note: The base wants another four years of Orange Man Bad and America First. The party will lose that base if it continues business as usual.

Critical to VDARE.com readers, Trump did mention immigration, albeit not quite enough:

[Democrats] will impose total open borders so that people can pour into our country and they will give them free healthcare, free welfare, and the right to vote in your elections. You won’t ever win another election as a Republic. They even want to take down the wall. The wall, I won on the wall too. We won on a lot of things. “Take down the wall,” I heard him say it the other day. “We will take down the wall.”

If the Democrats get a Senate majority, Trump continued, they will “free criminal aliens and MS-13 gang members,” and “install Sanctuary Cities all across the country.”

And Trump wisely reminded his massive audience what America First means. The “trillions and trillions of dollars” spent “rebuilding other foreign nations, fighting foreign wars, and defending foreign borders” could, he said, be better spent at home.

“We want to defend our border,” he said. And if we don’t, Trump explained by showing an advertisement, Democrats will turn illegal aliens into new Democrat voters, and “you won't ever win another election as a Republican.”

Trump hasn’t discussed merit-based immigration in quite some time, and he didn’t mention it at all during the campaign. And while the way he framed it wasn’t ideal—no, we really don’t want “people to come into our country”— at least he didn’t say, as he has before, that we want more immigrants.

Unfortunately, Trump did not say whether he would veto the Indian Overclass Importation Bill just slipped through the GOP-controlled Senate—with no objection from Loeffler or Perdue.

Even more unfortunately, and inexplicably, Trump missed the chance to bring up his modest but real immigration victories. He ignored his temporary immigration moratorium, although it will expire in January. If Biden scraps it, foreigners could take more than 500,000 American jobs in an economy that’s still under siege from the Chinese Virus and the lockdowns. He didn’t stress his other Executive Actions, which have reduced immigration dramatically. Nor did he specifically hang Amnesty around Biden’s neck—a real missed opportunity: Biden himself has said a “Path To Citizenship” is his top legislative priority. The GOP/ GAP should be pounding the message that Amnesty will not happen in a GOP-controlled Senate.

That aside, a bright spot on Saturday was Trump’s tying the Democrats to BLM, Antifa, and lawlessness in general. He showed an RNC ad that depicted Antifa goons beating Trump supporters after the Million MAGA March. “Those people got attacked viciously by the scum from ANTIFA,” Trump said.

“[Jon] Ossoff and [Raphael] Warnock are the two most extreme far left liberal Senate candidates in the history of our country,” he said of Perdue and Loeffler’s opponents. Both are soft on crime, he said, and would end cash bail. “[Warnock’s] declared ‘open up the jails,’ free the violent criminals and prey on Georgia, families, children,” Trump said.

Another great moment: Trump defended the Historic American Nation and its heroes and heritage. He wants to keep military bases named after Confederate generals:

They put in the Elizabeth Pocahontas Warren clause, where they have the right to take all the names of our past warriors, heroes in some cases, many cases, some turned out to be heroes in disguise, perhaps, but they want to take the names off and they have the right to desecrate, to take down, to destroy, to demolish places in our national parks that we don’t want demolished.

Trump even discussed Big Tech censorship and how the Left wants to “cancel free speech.” He urged the crowd to push their senators to eliminate Section 230, which protects Big Tech Social Media from the same liabilities as publishers.

As for GOP runoff candidates, Trump offered kudos to Perdue for being “a tremendous leader on pro-American immigration reform like nobody else.” (Perdue was a sponsor of the RAISE Act, which would have reduced legal immigration). The president defined “pro-American immigration reform” as supporting the wall, backing the emergency declaration funding border security, “shut[ting] down Sanctuary Cities and Chain Migration, and protect[ing] American jobs.”

In praising Loeffler, Trump oddly didn’t mention her stance on immigration (A+ from Numbers USA). But on the same day as the rally, Loeffler and Perdue were quoted as saying they would “never” support Biden’s Amnesty [Georgia Sens. David Perdue, Kelly Loeffler Vow ‘Never’ to Support Amnesty for Illegal Aliens, by John Binder, Breitbart, December 5, 2020].  Maybe they do get what Trump voters want!

Trump did observe, and rightly so and to Loeffler’s credit, that she “stood up to the Marxists and introduced legislation to protect our brave men and women in blue and she was threatened all over the place.”

It does take some nerve to a Republican these days, even a weak one. You never know when a BLM-Antifa goon squad will accost you on the sidewalk.

Those highlights aside, the tension between the Establishment and Trump’s base was notable. While Trump said Senate Majority Leader Mitch McConnell and House Minority Leader Kevin McCarthy did a “great job” during the election, he skewered Georgia’s two top officials as far as the runoff goes: Governor Brian Kemp and Secretary of State Brad Raffensperger. As I reported last week, their effort to stop Abrams and her Leftist gang from stealing the runoff have been less than stellar.

Minutes later, when Trump hammered Kemp and Raffensperger as weak sisters in the fight for honest vote, the chant began again.

For whatever reason, your secretary of state and your governor are afraid of Stacey Abrams.

When Perdue rose to speak, the crowd drowned him out. “Fight for Trump!” the boisterous Trump supporters shouted. The GOP base is obviously more concerned about the voter fraud on November 3 than the voter fraud that might well defeat Perdue and Loeffler.

GOP elites, of course, knit their eyebrows about losing the Senate if Trump and his supporters continue fighting over an election Biden supposedly won.

But this much is clear. The Americans who showed up in Valdosta don’t care about GOP elites. They want Trump and his agenda. And even if Trump isn’t ready or willing to jettison the Establishment, the base is.

Trump finished with these vaguely Churchillian lines about the Historic American Nation, which clearly implying it is an organic entity, not a Proposition:

We stand on the shoulders of American heroes who crossed the oceans, settled a continent, tamed the wilderness, laid down the railroads, raised up the great skyscrapers, won two world wars, defeated fascism and communism, and made America into the single greatest nation in the history of the world. ...

Many Republicans warn that they risk losing the Senate if Trump and his supporters continue to fight out the presidential election. They want the party to move on and focus everything on keeping the Senate.

But the base—as demonstrated by their rally responses—doesn’t want this. They want Trump and his agenda to stay. Trump himself isn’t ready to dispense with the Establishment, but his base may be. The GOP can only win in January with Trump at the helm. Without him, they would certainly lose.