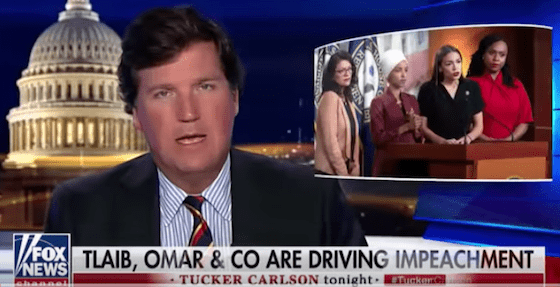 Democrat Party Is Being Run by Its Far Left, Not Speaker Pelosi

It’s sad to see the Democrat Party members go completely bonkers over the Trump presidency. We know it’s normal to be disappointed when your tribe loses a major election, but adults have a few drinks, pull up their socks and carry on with life. Democrats are doing no such thing, at least in the House of Representatives.

The next election is a little over a year away, yet the D-elites want to erase the 2016 one with the biggest weapon they have. The Dems are pushing impeachment rather than responding with thoughtful policies for their 2020 presidential candidate to take, which is how things are meant to work.

Politicians are supposed to accept the people’s decision in elections, but Democrats have been plotting against Trump since Day One. This is not how the citizens want their country run.

Ned Ryun appeared on Tucker Carlson’s show Friday, discussing how the far left has taken over the D-party. 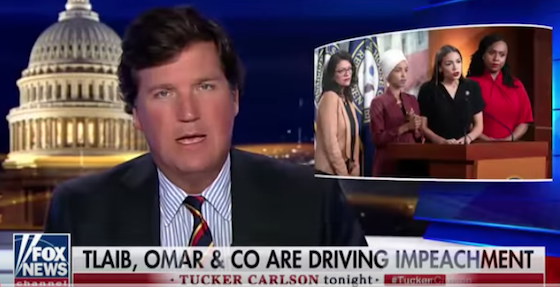 Tucker agreed that the four Squad members are “really in charge of the Democratic Party” rather than Speaker Pelosi.

TUCKER CARLSON: Alexandria Ocasio-Cortez is not a genius, she doesn’t know a lot, but what she lacks in impressive quality, she makes up for with pure aggression and moxie, and as a result, she and her friends now dominate and to some extent, control the Democratic Party. They’re the ones pushing impeachment.

REP. ILHAN OMAR (D-MN): A corrupt President who violates his oath in office must and will be impeached.

REP. ALEXANDRIA OCASIO-CORTEZ (D-NY): What he has admitted to is already impeachable, regardless of future developments.

CARLSON: Well, Congresswoman Rashida Tlaib, she is a charmer. The last one you saw there is selling impeach the mother-effer t-shirts online. Now, that of course echoes a promise she made well before the Ukraine controversy even existed.

Ned Ryun is the Founder of American Majority, and he joins us tonight. So, Ned, you know, for the first I would say, a couple months that the squad became prominent, it was a Republican talking point to say for obvious reasons that they’re really in charge of the Democratic Party. But it’s starting to kind of seem true.

RYUN: Oh, absolutely. I think with every passing day, Nancy Pelosi is really Speaker in name only. The inmates have taken over the asylum, which isn’t really that surprising, Tucker.

The parasitic far left has been eating the Democratic Party from within for years, and now it’s coming to the surface. And you’re right, they are an amazing blend of ignorance and petulance and stupidity and hatred.

I mean, the fact that they’re selling shirts for $19.99, to which I say, knock yourselves out, since Nancy Pelosi announced impeachment, Trump has raised $13 million for his re-elect.

But then you have Adam Schiff out there deciding that the chairmanship of the House Intel Committee is now platform for parody. It’s pretty amazing to watch.

The thing that’s crazy to me is Dems are willing to destroy all of these norms because orange man bad. If you think about what’s taken place over the last two and a half years, Russia-gate, collusion, Ukraine-gate — all of this stuff. It’s about one thing, Tucker. It’s about policy differences.

They cannot stand the fact that they are not in power and that Trump has a different approach to governing, not only domestically, but on foreign policy as well. And so now their new approach in all of this — we shall impeach all things. We will impeach Kavanaugh. We will impeach Trump. Based off what? Nothing. Policy differences.

CARLSON: So you’ve got to kind of wonder once these people take full control, formal control of the party and that’s only a cycle or two away —

CARLSON: Do people like Adam Schiff really believe they’re going to continue to run committees? I mean, what does it mean, at least for Adam Schiff?

RYUN: No, no, no, the amazing part is, if you study history, these revolutions have a way of eating themselves, just look at the French Revolution and Robespierre.

So I think they’re going to start to realize this will eat — they’ll start eating each other. But as you go down this path, I think they are — it shows how deranged they are. Look at the impeachment polls this week in the midst of all of this hysteria about Ukraine-gate, POLITICO/Morning Consult only showed 36 percent of the American people supporting impeachment of Trump.

And if you get into the heartland, where I grew up, Tucker, impeachment dropped to the low 20s, and you start to think about how stupid they are when you get to the swing districts of Oklahoma 5 and Illinois 14, which are real pickup opportunities for the GOP in 2020. They’re going to make those members watch walk the impeachment plank and lose the majority, I really do think so in 2020 if they continue to push this because I think impeaching Trump is a fool’s errand being pushed by fools.

CARLSON: We will see. Ned Ryun, great to see you tonight. Thanks so much for that.