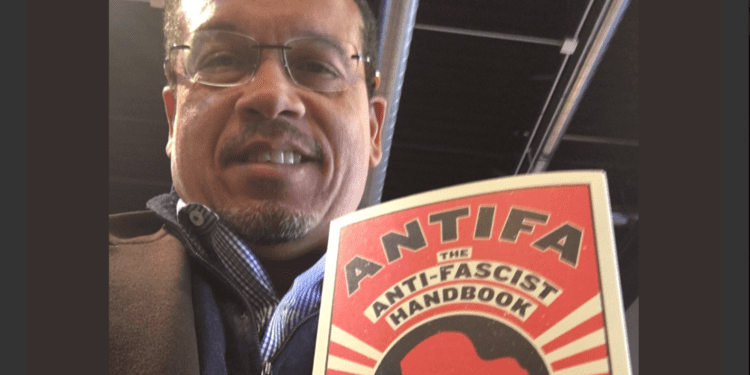 I see that Keith Ellison, the Black Muslim who is Attorney General of Minnesota, has recently deleted the Tweet he posted with a selfie of himself with holding Mark Bray's Antifa handbook.

After the violent terrorist attack against Andy Ngo by antifa, @keithellison - who is a state attorney general - deleted this tweet supporting antifa.

Ellison is trying to cover up his support for domestic terrorism. Do not let him.https://t.co/RVHgsCW13Z pic.twitter.com/fd355a3lbl

Ellison seems to have been motivated by publicity about the murderous attack on Andy Ngo, rather than the even more serious attack on an ICE facility by Willem van Spronsen. 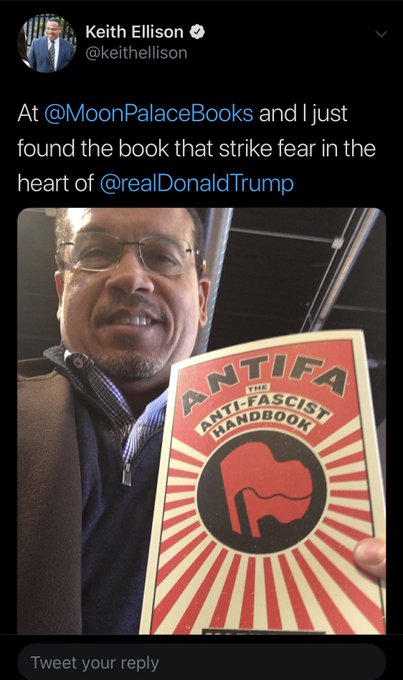 But for the chief law enforcement officer of a state to be posing with a violent anarchist's manual that he hopes will "strike fear in the heart" of the elected President of the United States is crazy.

Andy Ngo writes in the New York Post that:

Though known for their hallmark masks and black uniforms, antifa isn’t a formal, centralized group. Its “members” operate as a loose grouping of militant Marxists and anarchists drawn from various autonomous far-left groups. Political violence is a feature, not a bug, of antifa, which believes itself to be in an existential struggle with latter-day fascism.

The worst part is how prominent media figures and politicians glamorize and even promote antifa as a movement for a just cause. CNN’s Chris Cuomo and Don Lemon have defended antifa on-air. Chuck Todd invited antifa ideologue Mark Bray on “Meet the Press” to explain why antifa’s political violence is “ethical.”

That last choice of targets — Marines — was no accident. ­Antifa operates by a very broad definition of “fascists.” By ­antifa’s telling, fascists include mainstream conservatives and even centrist journalists who dare criticize them. But they save most of their hatred for US law enforcement and military service members. Antifa’s goal is ­violent political revolution, and it sees law-enforcement officers and the military as the main ­obstacles.

The attack on the Marines was discussed here in Marines Claim Antifa Screamed Racial Slurs During Nightmarish, Life-Threatening Attack.

The prosecution of Joseph Alcoff (whose day job is as a staffer for mainstream Democrat thinktank Americans For Financial Reform) was covered by James Kirkpatrick here.

Another Antifa member alleged to have participated in the attack was Joseph “Jose” Alcoff, aka “Chepe,” who now faces 17 charges, including “ethnic intimidation.”

Alcoff was well-connected in Establishment Democratic politics, despite (or because of) which his arrest has been almost unmentioned in the national MSM. [DC Antifa leader arrested for multiple violent felonies out of a job at progressive nonprofit after his radical ideology was exposed, by Andrew Kerr, Daily Kerry, January 29, 2019][More]

That's the important point: This stuff is now mainstream for the Left, but their targets are all normal Americans, especially police and Armed Forces.