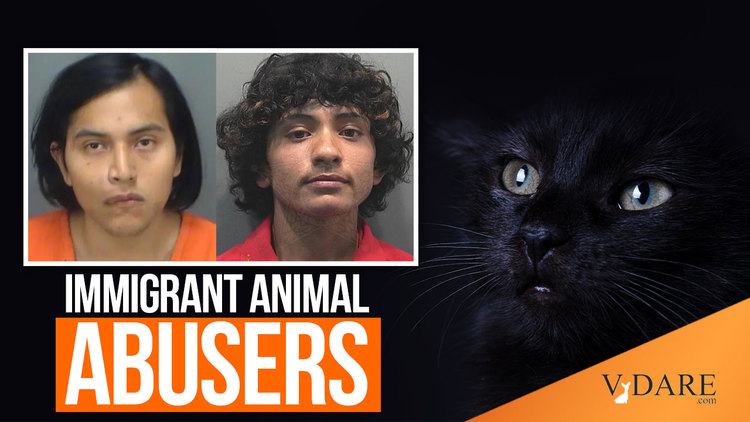 See also, by Brenda Walker (2006) Diversity Is Strength! It's Also… Cruelty To Animals 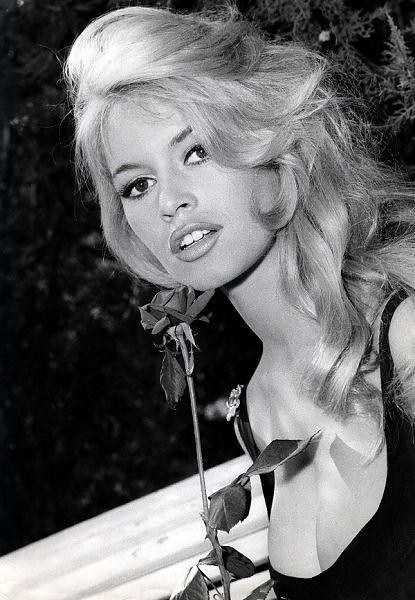 “He who is cruel to animals becomes hard also in his dealings with men,” Immanuel Kant said more than 200 years ago. This dictum remains applicable today. Trace the life history of a mugger, rapist or a murderer, and you’ll often find the backstory of a troubled kid who tortured cats, dogs, birds, and other creatures for sport. Trace the backstory of an immigrant, or immigrants, and you’ll find the same thing. The unmentionable fact is that our current immigrant inflow seems disproportionally to believe that God’s giving man dominion over the lower animals is a license for cruelty. Maybe we need a celebrity animal lover like Brigitte Bardot to complain about immigrants and animal abuse.

VDARE.com’s writers have provided detailed and graphic examples of wanton animal cruelty that is culturally accepted and often encouraged in Third World countries. (See here, here, here, etc.) By importing such people, Americans are inadvertently importing such reprehensible practices as caging bears for years and even decades to extract gall-bladder bile to use in medicines (China); axing fully conscious pigs in slaughterhouses (Mexico), and castrating and dehorning bulls without anesthetics (South Africa). Thus Brigitte Bardot has landed in hot water in France more than once for complaining about the Islamic Halal method of slaughtering animals.

Both humans and animals in the U.S. would benefit from strict immigration limits and enforcement. But the Biden Regime and its Treason Lobby supporters, obsessed with opening our southern border to freeloaders and new Democrat voters, is aiding and abetting animal cruelty. Brace yourselves for what might be coming. 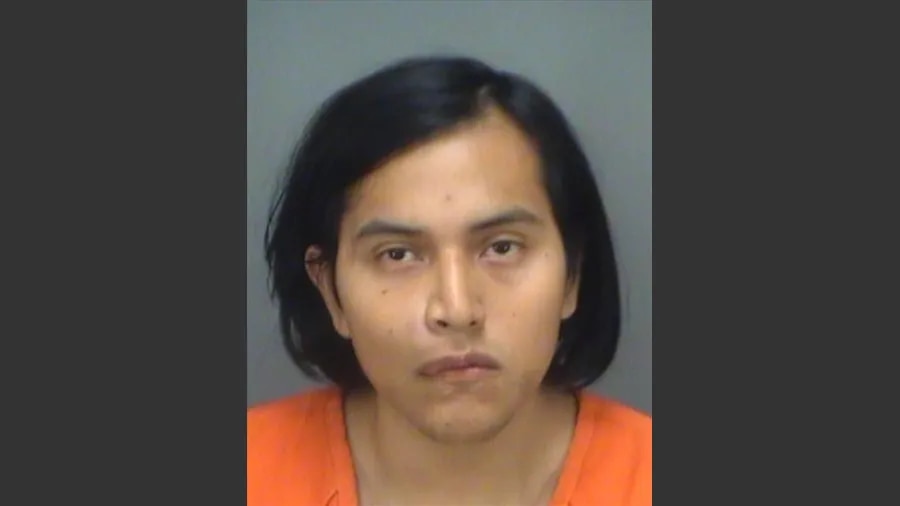 His motive, police said, was to “show what he was capable of to someone he was living with.” Well, he showed ’em, alright.

But Pena-Cedillo had also demonstrated his capacity to harm people three years earlier when he assaulted an EMT, a firefighter, and a police officer. Local media described him as a “Clearwater man”  [Clearwater man decapitated cat, displayed head on stick, police say, by Josh Fiallo, Tampa Bay Times, April 23, 2020]. Thus far, I find no record of his deportation, although ICE filed a detainer with police. 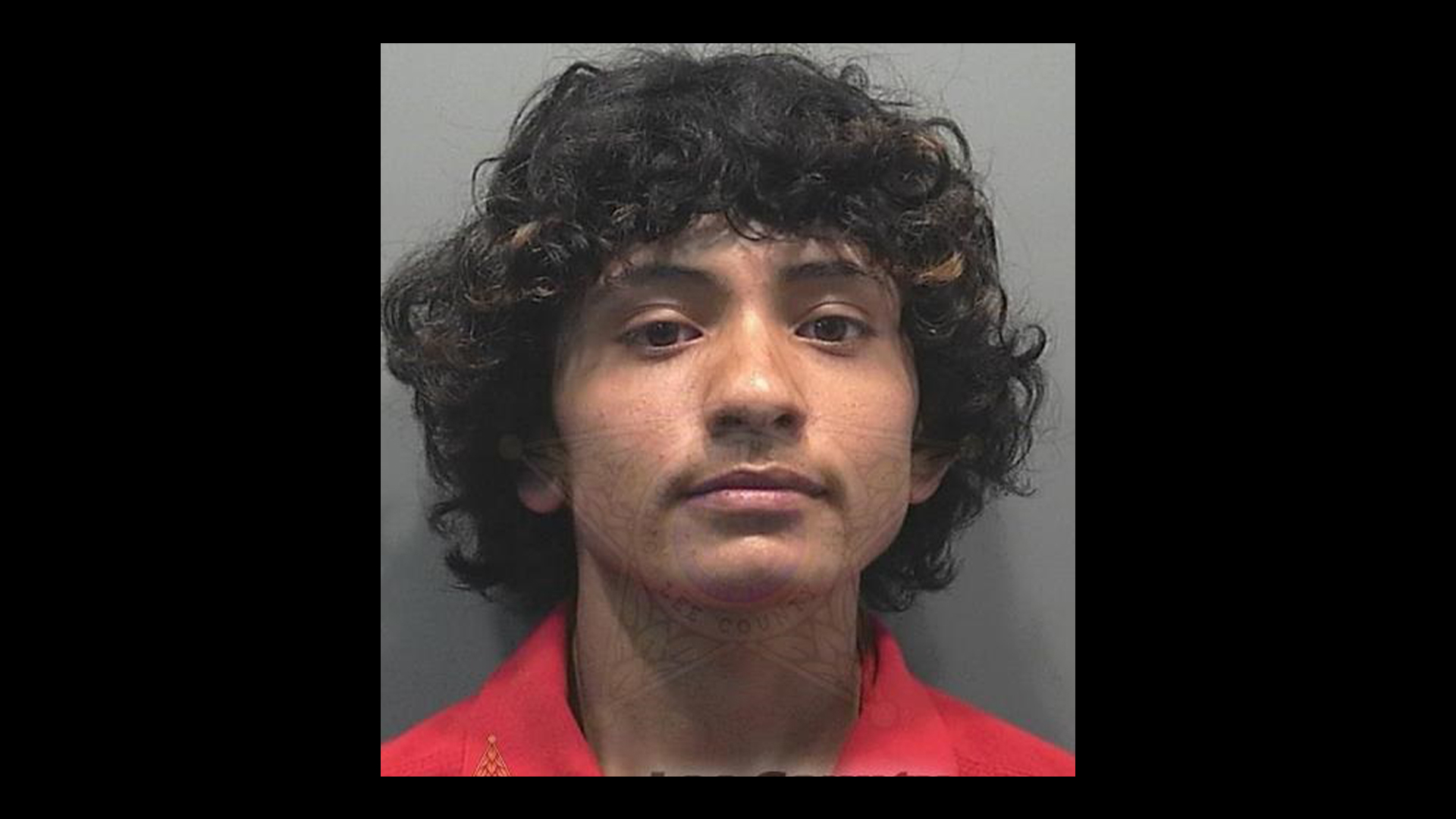 Lee County sheriff’s deputies had been called to a home where a man had threatened its occupants. After noticing pools of blood outside the house and bloody footprints near the rear entrance, the sheriff’s office quickly obtained a search warrant. They found a lifeless dog, which Lara had beaten and stabbed multiple times, baking at least 500 degrees inside the kitchen oven [Deputies: Florida man brutalized, baked dog, Associated Press, April 4, 2020]. Lara pleaded no contest in February 2021 to inflicting torture and death upon an animal, a third-degree felony.

Granted, these crimes occurred when POTUS 45 Trump was still in charge, and they are sensational anecdotes, not studies. And they certainly don’t suggest that native-born white and black Americans haven’t brutalized animals, particularly in the sleazy worlds of cockfighting and dogfighting.

But the larger point remains valid. Why ask for more animal cruelty by importing it? Indeed, because brutality toward animals is a reliable predictor of brutality toward humans, why shouldn’t U.S. authorities carefully vet admissions, especially if the sending country tolerates it?

Surveys underscoring the link between animal abuse and crime are numerous. Examples:

Although these findings dispute the assumption that animal abuse inevitably leads to violence toward humans, they point to an association between animal abuse and a host of antisocial behaviors, including violence.

[The Relationship of Animal Abuse to Violence and Other Forms of Antisocial Behavior, by Journal of Interpersonal Violence, September 1999]

To investigate crimes against people more effectively, then, we should focus on identifying and recording animal cruelty, a crime in all 50 states and a felony in many. Unfortunately, many such acts go underreported and even unreported, but at least the federal government is moving to provide a picture of how bad a problem it is. In 2014, the FBI upgraded animal abuse to a Class A crime, and in 2016 began including it in its Uniform Crime Reports database under four categories:

That won’t happen, of course. Importing Democrat voters and The Great Replacement are more important to Biden and his Treason Lobby backers.

And that’s not just bad news for the Historic American Nation, but also for American animals.

Carl Horowitz [Email him] is a veteran Washington, D.C.–area writer on immigration and other issues.