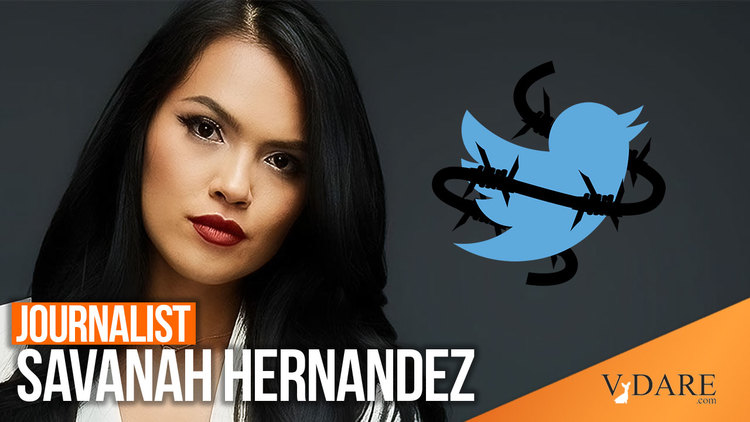 Savanah Hernandez, 25, is one of the most stifled young journalists in America. She's intrepid, prolific and opinionated. But because she has relentlessly exposed the lies of Big Government, Big Business, Big Pharma and Big Alphabet (LGBTQIXYZ), she will never be embraced or promoted by establishment gatekeepers. Because she is right-thinking, right-leaning and a proud America First advocate, you won't see her invited to appear on mainstream corporate media—even though her videos have been viewed tens of millions of times over the past five years.

Savanah first caught my attention several years ago when she bravely plunged into left-wing mobs to expose their hatred and violence firsthand. I've interviewed her for her work on Black Lives Matter riots and the impact of COVID-19 vaccines on fertility. Last week, Savanah was on the ground reporting from Georgia Tech's McAuley Aquatic Center, where the NCAA swimming championships took place. She nabbed an interview with an outspoken Virginia Tech female athlete whose teammate was beaten by biological male Lia Thomas, the hulking "trans" competitor for the University of Pennsylvania wreaking havoc in collegiate women's swimming.

"It's heartbreaking to see someone who went through puberty as a male, and has the body of a male, be able to absolutely blow away the competition," the Vtech athlete told Savanah. "And you go into it with the mindset that you don't have a chance."

Savanah's interviews with the Vtech athlete and several other protesters and counter-protesters at the NCAA championships went viral across social media last week—and were shared by top-rated cable news host Tucker Carlson. Savanah had been banned by Twitter in mid-November 2020 without explanation after President Donald Trump shared one of her multimillion-viewed viral videos. But she had created a second account for her independent podcast, Rapid Fire, to spread her solo investigative reporting.

On Monday, she was banned again. I reached out to her for a mini-profile so that you can know more about this remarkable young reporter and how to find her work.

Q: How many times have you been banned/censored/suspended from Silicon Valley platforms and otherwise silenced?

A: Back in 2020, I had my original-reporting account banned on Twitter. I was exposing BLM and Antifa for their rioting and violent tactics. During my reporting of Austin, Texas-based Antifa, 10 people mobbed and robbed me for reporting on their illegal activities (first time I was silenced in real life).

In November 2020, Trump retweeted my clip from the Million MAGA March of everyone peacefully singing "The Star-Spangled Banner." The clip surpassed 8 million views, and three days later, Twitter deleted my entire account without any explanation.

I started an account for my podcast and then started using it to showcase my reporting. I was the first to get an interview with an NCAA athlete regarding the truth about Lia Thomas. The clip made it on Tucker and amassed over 1.8 million views. Twitter deleted the account this week for "ban evasion."

On Instagram (@savwith1n), Savanah's clips of peaceful Trump supporters at the January 6 rally were removed for "violence and promoting hatred." Instagram is "now going back to my posts from six months ago," Savanah told me, and deleted her video featuring a collegiate athlete who suffered myocarditis. "Not sure how many more posts can be banned before they take the full account."

On YouTube (Sav Says), Savanah told me: "I started my own show called Rapid Fire. I'm currently on my fourth strike. If I get one more, I'm permanently suspended. My first three strikes coincided with me calling out the COVID vaccine." Her latest show, "calling out NATO, Ukrainian corrupting and the biolabs (before it was mainstream news)...was again censored for 'medical misinformation.'"

A: No. And this isn't just about Big Tech censorship. I went and stood with a sign that read "Police Lives Matter/Say his name-David Dorn" during the BLM riots of 2020. I was attacked multiple times. You can't stand on a street corner or go to a leftist event and ask simple questions without being attacked, silenced and harassed. I recently went to a "pro-trans surgery for kids" rally. The protesters didn't like my politics, so they mobbed me, called me a fascist and poured water on my phone.

Q: You've chosen the more difficult path of remaining truly independent. How did you arrive at that decision, and what are the biggest obstacles to sustaining an independent media career/presence?

This industry is filled with a lot of fake people who are only in this for money and fame. A seldom few actually care about the truth. I want to make sure I'm always one of them. The biggest obstacles are censorship and slander and lies from the media. If you tell the truth, you get silenced by Big Tech. If that doesn't do the trick, the media comes in and destroys your entire reputation and life.

Savanah's fighting spirit gives me hope. "This is a war, and I will never stop exposing the corrupt entities at play," she declared Monday. "I will continue to elevate the voices in this country that the media tries to silence."