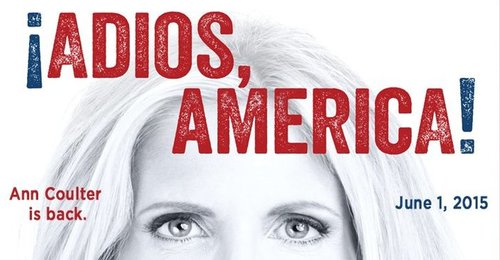 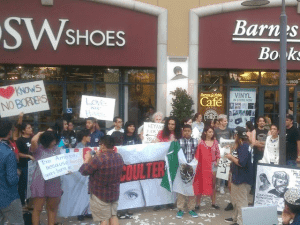 As huge portions of America devolve into parts of the Third World, expect more of this. Ann Coulter was screamed at and almost attacked by various invaders who attempted to break up a book signing in California.

As dozens of fans waited their turn to have a book signed, several people rose from the tables in the adjacent Starbucks and began bellowing slogans:

Yes, we know you are undocumented and unafraid. That's the problem. You're a protected class of the government, unlike actual Americans.

The protesters inside the store, unfurled a large banner reading “Adios, Ann Coulter,” and brandished Mexican and anarchist flags. Some approached the front of the line and attempted to confront Coulter, but were rebuffed by security guards.

Obviously, we need to offer them economic growth and tax cuts.

Of course, if Ann did (and the rest of us palefaces joined us), it would be a matter of months before refugees from Third World America would come sailing to the Continent, begging for help. That is, unless the Africans finish off Europe first.

As much as they don't like us, they can't seem to help following us everywhere.

“You have to understand,” Coulter told Breitbart News, “screaming and defacing things is how Latin Americans express disagreement. At least as long as they were destroying books and screaming in a book store, they weren’t molesting any 4-year-olds.”