Obama vs. Trump (And Pat Buchanan) On The Nation-State—“The True Foundation For Happiness And Harmony.”

In case you're still not clear about why so many Americans are voting for Donald Trump, let's follow our president on his recent trip to Britain and Germany.

Last Saturday, April 23,  Obama spoke to a "town hall meeting" at the Royal Horticultural Halls in Westminster, seven hundred yards from Westminster Abbey, where English monarchs back to Edward the Confessor 950 years ago are buried, along with many other cultural notables.

The audience consisted of 400 young people apparently chosen by the American Embassy. To look at them, you would never know you were in England—let alone seven minutes’ walk away from the very hearth-place of Englishness.

I did look at them. In fact I trawled through news photographs of the event to find a picture showing the largest number of audience members, and scrutinized them. 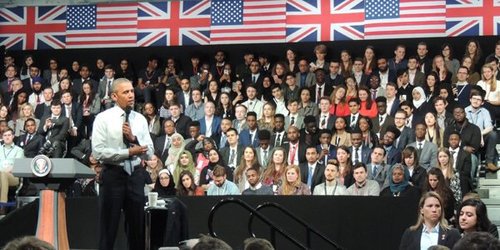 There were 116 audience members in my picture. Tallying up those of white European appearance, and giving benefit of the doubt to ambiguous cases, I got 51, which is to say 44 percent. Thirty faces in the picture — that's 26 percent — were Negroes. Seven of the women wore Muslim headscarves. Royal Horticultural? More like the Royal Multicultural. I weep for England.

Obama's address was his usual gassy blather about hope, change, and the wickedness of white people. The audience, including of course that 44 percent of Uncle Tims, drank it down joyfully.

These were young people, though, and way ahead of a codger like Obama on the grand modern project to pretend that everything is equal to everything else. Racial justice? Oh sure, still a way to go yet, but that's basically a done deal. Obama's like one of those generals always fighting the last war. The war we're fighting today is World War T — the fight for transgender rights! Where is Obama on that? 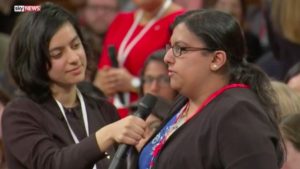 We found out. A morbidly obese Pakistani woman, no headscarf, lumbered to her feet and told our president that, quote: "I'm coming out to you as a non-binary person, which means that I don't fit within …" At that point she got all verklempt and teared up. Naturally the audience applauded wildly. It wasn't over, however, until the fat lady had unbosomed herself of the following:

I know that in North Carolina … people are having to produce birth certificates to go to the toilet. In the U.K. we don't recognise non-binary people under the Equality Act … I really, really wish that yourself and David Cameron would take us seriously as transgender people and, perhaps you could elucidate, what you can do to go beyond what has been accepted by the LGBTQ rights movement, in including people who fit outside the social norms?

Emotional student comes out to Obama at town hall in London, By Liz Hearon, Mashable, April 23, 2016

I must admit, the whole thing had me baffled. You folks down there in the Tarheel State have to show a birth certificate to get into the john? Wow. Up here in New York, just a driver’s license will get you in.

And what does non-binary mean? Two-ton Tessie didn't get around to telling us. What is she, hexadecimal?

Obama fielded it gamely. He told the lady he was "incredibly proud" of what she had done, and called her "courageous," as if mouthing some postmodernist psychobabble in a hall full of Social Justice Warriors was up there with charging an enemy machine-gun nest or swimming the Hellespont.

Obama also told her to, quote, "keep pushing"; which, if I understand the "non-binary" business correctly, is likely the last time she'll hear that from an authority figure. 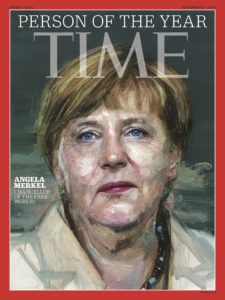 Then, Sunday and Monday, off to visit Mutti Merkel in Germany. Whether Mutti is unary, binary, ternary, or, as we math geeks say, n-ary [Clip:  "I'm 'Enery the Eighth, I am …"] … Thank you, Peter. Concerning Ms Merkel's precise arity, I have no information.

Obama praised her anyway for her courage and foresight in opening her country to a million and a half feral male Muslims who'd rather be drawing welfare in Düsseldorf than shouldering a rifle in Damascus.

Speaking at the opening of an industrial trade show in Hannover, Obama gave them the full multicultural Monty

Obama clip:  When the future is uncertain, there seems to be an instinct in our human nature to withdraw to the perceived comfort and security of our own tribe, our own sect, our own nationality, people who look like us, sound like us. But in today's world, more than any time in human history, that is a false comfort. It pits people against one another because of what they look or how they pray or who they love. And yet, we know where that kind of twisted thinking can lead … 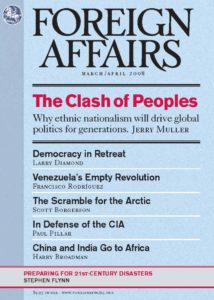 Well, yes, we do indeed know where it can lead. One way to avoid such horrors is to maintain a system of nation-states, each with a supermajority of a single ethnicity. As Jerry Muller pointed out in his article eight years ago in Foreign Affairs:

Whereas in 1900 there were many states in Europe without a single overwhelmingly dominant nationality, by 2007 there were only two, and one of those, Belgium, was close to breaking up. Aside from Switzerland, in other words — where the domestic ethnic balance of power is protected by strict citizenship laws — in Europe the "separatist project" has not so much vanished as triumphed.

It took two colossal wars and a couple of smaller ones to get from the diverse states of 1900 to the ethnically uniform states of 1950. But the result was stable for half a century — which by the standards of European history is a lot of stable.

Now Europeans are bored with all that stability and anxious to get back to the ethnic diversity of 1900. What could possibly go wrong?

In contrast, Donald Trump delivered a speech on Wednesday at the Mayflower Hotel in D.C. — hereinafter "the Mayflower Speech"—with more good sense in it than we've heard from a leading candidate for decades, and certainly from President Obama last week.

I could almost have written it myself. In fact, Sir, if you're looking for speechwriters, I can be contacted via VDARE.com …

I did say "almost." Trump wants NATO members to pay more for our protection; I'd shut down the whole thing, or at any rate pull the U.S. out of it. Nor did Trump call for Puerto Rican independence, as I would have wished; nor for the expulsion of the U.N. from American soil.

There was some bluster, too. "Iran cannot be allowed to have a nuclear weapon," said Trump. Why not? How are you going to stop them?

And again, "I have a simple message for [ISIS]. Their days are numbered." Why? Who cares? If we stop Muslim immigration, as the candidate has said we should, why should ISIS bother us?

Trump did, though, argue for a sensible balance of power with Russia and China, for an end to missionary wars, and for a powerful military on the Roman principle: If you want peace, prepare for war.

No country has ever prospered that failed to put its own interests first. Both our friends and our enemies put their countries above ours and we, while being fair to them, must start doing the same. We will no longer surrender this country or its people to the false song of globalism. The nation-state remains the true foundation for happiness and harmony.[speech as written,  transcript ]

My emphasis. Scolpisci nella tua testa a lettere adamantine—carve into your mind in great stone letters: "The nation-state remains the true foundation for happiness and harmony."

This guy gets it. He's a nationalist.

My positive impression was echoed by Pat Buchanan, whom history has cast as John the Baptist to Trump's Jesus. Pat's Thursday column was a whoop of joy. His attention was particularly caught, as mine was, by that line about the nation-state as "the true foundation for happiness and harmony."

Added Pat: "Is that not a definition of a patriotism that too many among our arrogant elites believe belongs to yesterday?"

Yes, Pat, it is. I hope to see your name in Trump's cabinet—as Secretary of State, perhaps.

And if I get the speechwriting gig, I look forward to lunching with you at the White House now and then.