I'm here in California on business and decided to drive down with a friend to Orange County to go to the Trump rally. It was something else.

My friend and I never did get into the venue as the event was oversold. The remarkable part was when the anti-Trump people showed up.

The peaceable Trump people were patiently waiting to enter the venue. The Trump crowd was predominately white, I'd guess about 90%. The non-white folks were from various ethnic groups and no one group of them predominated.

(On that score, a funny side note: my friend X., who attended the rally with me, is black, and very dark-skinned at that. Although he is a Bernie supporter, he donned a Trump shirt to do as Romans do in Rome. He was there for the unique experience.  More than a few Trump rally attendees took pictures of X as if he were some exotic species. Some even asked to have their pictures taken with him and he was happy to oblige and found it amusing. The picture-takers all seemed very pleased with X's attendance at the rally.   He later asked me why they were so pleased with his presence. I explained that many whites are hurt and exasperated by the constant accusations of racism by the Left and he served as some kind of magical amulet to ward off the evil eye of racial ickyness—for lack of a better term).

Back to the story: an angry throng suddenly appeared and marched towards the Trump crowd, led by a black flag with an anarchist A on it. The police quickly swung into action and created a barrier between the two crowds with their horses and riot gear. 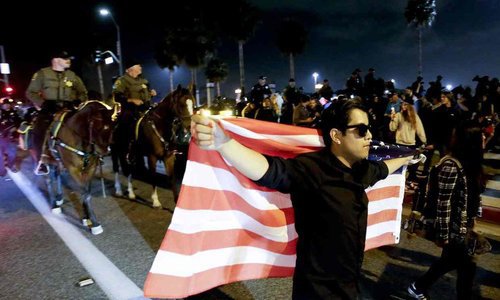 The two crowds were stark in their differing composition. The Trump folks were solidly middle class, there were no children besides teenagers but besides that ran the gamut of ages. Many were dressed nicely and there were many attractive women.

The anti-Trump crowd was a different kettle of fish. They were all either teenagers or young adults. They were majority non-white. They held aloft signs and banners that were literally obscene with expletives scrawled over them along with vile cartoons. Foreign flags were held aloft. They hurled profanities at the Trump supporters. Later they threw more than obscenities. They picked up dung dropped by the police horses and threw it at us. It hit one nicely-dressed woman and she had to find a place to clean herself off.

The Trump rally goers responded with assorted chants that are almost cliché now (“USA!”, “Trump! Trump! Trump!”). The (much smaller) anti-Trump crowd went up and down the Trump line taunting them.

But the real excitement happened as the Trump rally convened. By now darkness had fallen, and this made criminal mischief easier to conceal. The anti-Trump crowd put benches somewhere across an intersection. This created a traffic jam and marauding teenagers holding Mexican flags walked among stranded cars.

This was genuinely scary. They were looking for people in cars with Trump garb. When they found some Trump people, they'd yell, "There's a f**kin Trump!" or words to that effect. My friend Sam said, "oh, f**k this!" and scrambled to take his shirt off. He was so panicked he forgot to take off his seat belt first.  I had to say, "Sam, you'd have more luck without your seatbelt on.". After Sam had gotten his Trump shirt off he implored me to do the same. For whatever reason, I didn't bother to take my own shirt off. This was a mistake.

End for now, I'm too tired to finish now, just got back from rally after 3-hour drive!

Ryan Kennedy (email him) has written us many letters. He lives in Anchorage, Alaska.