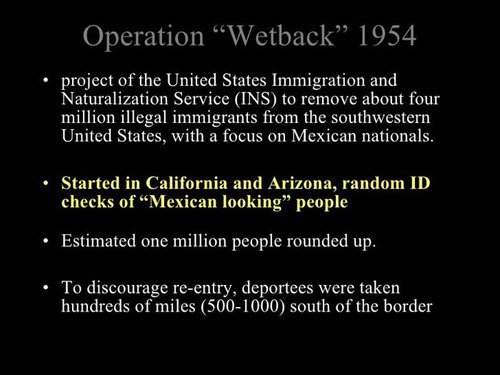 Eisenhower's "Operation Wetback" Worked Beautifully - But Ike Had 'Political Will'

Her critics are loathe to say it.

Not being one, I’ll say it: Ann Coulter was right.

Now Lord has posted a valuable discussion Why Trump is the New Eisenhower on Immigration Conservative Review August 21st, 2015

On June 17, 1954, using what today would be considered a deeply politically incorrect term, “Operation Wetback” began. Eisenhower had appointed a West Point classmate and veteran of the 10st Airborne, General Joseph “Jumpin’ Joe” Swing to head the Immigration and Naturalization Service. The Eisenhower directive to Swing was Trumpian: they have to go, round them up and move them out. And in the kind of military style that Eisenhower himself had employed in organizing the massive logistics of the D-Day invasion of Nazi-occupied Europe, General Swing went to work…

Within a month, reports the Christian Science Monitor, in California and Arizona alone, “over 50,000 aliens were caught. Another 488,000, fearing arrest, had fled the country…Illegal migration had dropped 95 percent by the late 1950s.”

The Wall Street Journal editorial board howls about the GOP becoming The Deportation Party, failing to note a word about Ike…

"The last time Republicans tried this, in the 1920s, they alienated immigrant groups like the Irish and Italians for decades until Ronald Reagan won them back. If they want to lose in 2016, they’ll follow Mr. Trump’s anti-immigrant siren."

And then utterly crushes this deeply dishonest statement:

There were three presidential elections in the 1920’s – 1920, 1924 and 1928. The GOP won all three in landslides, immigration policies and all. The defeats began in 1932 – as history well records because of the Great Depression. Not illegal immigration. And note again – after Eisenhower set his program to round up and deport illegals in motion he was re-elected two years later in a landslide. A landslide bigger than the one before Ike made the GOP the “Deportation Party.” So much for alienating the electorate.

Clearly, this is a way, as Eisenhower taught us.  There is no will at the political level.

But why, VDARE.com keeps being the only site asking, is there 'no will at the political level'? When Trump has proven yet again Public support for serious measures does exist. I repeat: Why Has GOP Leadership Spurned Base, Election And Constitution? Severe ADD (Adelson Dollar Disorder)!

Wholesale bribery of Washington Pols by the Treason Lobby is the new element.