"Too Many Whites, Men Leading Military"?

Steve Sailer blogged on a report titled Report says too many whites, men leading military, Pauline Jelinek, Associated Press, March 7, 2011. Sailer had a different title: Report For Congress On Military: ”Too Many White Men Dying In Combat” You may be interested to know that the man responsible for that  report is head of the Military Leadership Diversity Commission General Lester L. Lyles, USAF, Ret, a man with many carefully punched tickets and Oak Leaf clusters on the medals that are awarded for sitting in offices getting those tickets punched. General Lyles is pictured right. 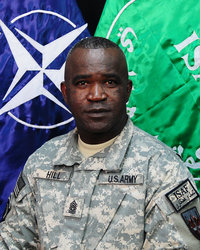 In a related note, US troops in Afghanistan are going to receive sensitivity training to make them more "gay-friendly"—that's towards any gay American fellow soldiers, not the notorious pederasts who make up the local adult male population in Afghanistan. This came out in an interview with CSM Marvin Hill, the ranking enlisted man in Afghanistan, pictured left

The Pentagon is launching an extensive force-wide program to ease the process of integrating open homosexuals into the ranks, including into close-knit fighting units. Army Command Sgt. Maj. Marvin Hill, the top enlisted man in Afghanistan where 100,000 U.S. troops are deployed, said that the sessions on respecting gays’ rights will go right down to the forward operating bases, where troops fight Taliban militants. ”I have heard about the training that will be forthcoming to the battlefield,” Sgt. Hill told Pentagon reporters via a teleconference from Kabul. ”We will take our directions from the Department of Defense, from the secretary of defense, the chairman, as well as the service chiefs of each service. Our plan is to take their direction, and we’re going to execute that training right here on the battlefield.”Combat troops to get gay sensitivity training, By Rowan Scarborough, The Washington Times, February 24, 2011