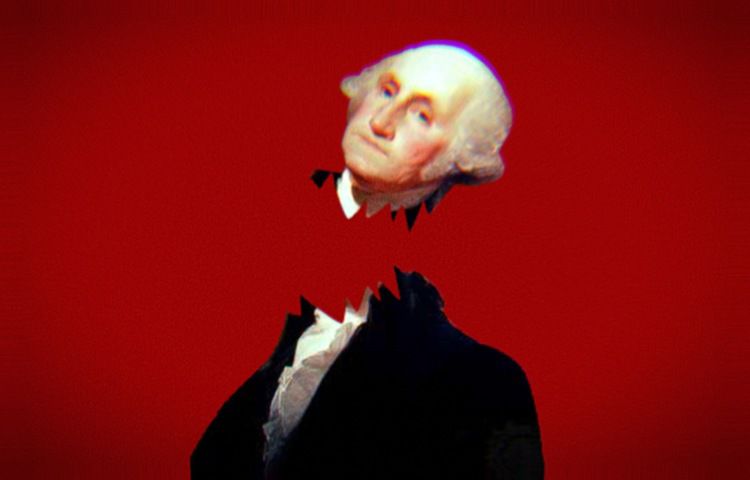 Next On The Chopping Block, George Washington

A painting of George Washington (by a communist no less!) is too much for an American school that is still named after him.

The San Francisco school board voted Tuesday to destroy a controversial school mural featuring slaves and a dead Native American, saying the removal equates to necessary reparations for historic wrongs.

The board voted to paint over the mural at Washington High School but added a caveat, leaving the door open to the possibility of obscuring the mural with panels if painting it results in long delays from legal challenges or other issues.

The preference, however, is to destroy it, board members said...

Painting over the mural would cost at least $600,000, with the majority of the cost in producing an environmental impact report. In addition, supporters of the mural have vowed to sue if the board voted to destroy it and legal costs could add to the cost, district officials said.

“I don't want to go to court,” said board member Faauga Moliga, prior to the vote. “But if it comes down to it, then that’s what we have to do. I would like for these murals to be painted down.”

The painter, Victor Arnautoff, was a leftist. After working as a teacher (naturally) and accusing people of McCarthyism, he returned to the Soviet Union to spend his last years. The Life of Washington mural may have been a deliberate attempt to undermine Washington.

The good news is that younger nonwhites and liberal young whites (baizuo, as the Chinese call them) that come through the American educational system aren't really capable of thinking these things through. They just get "good" or "bad" signals from the Main Stream Media and academia and execute the desired Pavlovian response. They need to be "protected" from images because they can't even look at them, let alone analyze their meaning.

Also notice the rent-seeking involved. It apparently costs almost a million dollars to cover a painting, with the bulk going to a useless "environmental impact study." All this in a city with homeless people, needles, and feces in the streets.

Conservatism Inc. largely joined the MSM offensive against Confederate monuments, supposedly because they thought it would end there. Rich Lowry said Robert E. Lee was bad because he "betrayed the U.S. government" and a writer for the late Weekly Standard said Lee had been "backward-looking," when we need to unite around "core values" and "American virtues".[Will the Left Stop With Robert E. Lee, by Gregory Hood, American Renaissance, April 13, 2018] Years ago, we predicted that those who came for the Confederate flag would come for the American flag.

Now, the Father of his Country is not part of American "core values." It's only a matter of time before there are demands Washington D.C. be renamed. It probably should be. The disgrace that exists today should not be associated with a great man.