A photograph buzzing around the internet this week shows sixteen black and mulatto female West Point cadets, in uniform, posing with their fists raised in an apparent tribute to the Black Lives Matter Soros-funded anarchist group. 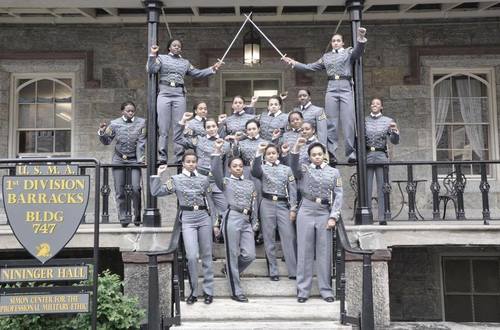 Where there should be comradeship and institutional loyalty, these troublemakers have introduced rancor, division, and victimological whining. That's not to mention being in clear violation of Department of Defense directives and every traditional conception of military dignity and honor.

In a country that had not lost its collective mind on the subject of race fifty years ago, these malefactors would be shamed before their comrades, then sent to the brig for five years each, then dishonorably discharged. In the country we actually live in, where blacks are the pampered pets of a fawning elite class, they will probably be decorated for valor.

Blogger John Burk, who has some inside information from the US Military Academy, comments:

The ladies before you are class seniors and have been making their voices heard more and more on an app called "Yik Yak" where users are kept anonymous, yet no one dares speak up in public against them due to them being accused of being racist and risk being expelled from the Academy for hurting someone's feelings. [Racism Within West Point, InTheArenaFitness.com, May 37, 2016]

To think that brave, patriotic Americans in combat might find themselves under the command of these self-obsessed harpies! Far as I'm concerned, Hell can't be hot enough for the cowards and time-servers in our senior military leadership who tolerate, and even encourage, this lunacy.

The story has, though, put me in mind of military punishments in general:

Needless to say, they are not hanging Daneesha Deever in the morning. And let me make it clear that I do not think that dishonoring the Military Academy and spitting on its code rises to the level of a capital offense. A spell in the brig will meet this case.

But did I say five years in the brig? Make it ten.

On a related topic…here's another microaggression. At the White House correspondents' dinner in 2011,  goodwhite comedian Seth Meyers jeered at Donald Trump for saying he has a great relationship with the blacks. Said Meyers: "Unless the Blacks are a family of white people, I bet he's mistaken."

So apparently it's now microaggressive to refer to the blacks as "the blacks." Don't you get tired of having to overhaul your vocabulary every time CultMarx Central issues a directive?

I wish I could tell you that Donald J. Trump has given the New York finger to these nuisances, but I'm sorry to report that in his most recent remarks he's switched to saying "African Americans." Let's be thankful for small mercies, though: At least I have not so far spotted him saying "the African American community," as if they all live in one town.

All the cognitive energy we waste trying to keep track of this stuff must surely be contributing to Global Warming.

And also on the Black Lives Matter front: the Washington Times ran a story about a research study carried out in 2012 and 2013 by Washington State University:

In the study, researchers wrote that their analysis of the 990 fatal shootings in 2015 "suggests the police exhibit shooter bias by falsely perceiving blacks to be a greater threat than non-blacks to their safety."

That word "falsely" strikes me as sly, but let it pass.

Note, please, that the Washington Times study — the one that found police more reluctant to shoot blacks than whites—while it used real police officers with real handguns, was carried out experimentally, under controlled conditions, with those handguns firing laser beams at volunteer test subjects. The Washington Post study, on the other hand, was based on actual police shootings, analyzed after the event.

My function here is like that of the Gods of the Copybook Headings, limping up to explain it once more.

There's plenty of overlap between the statistical profiles of whites and blacks. Statistical differences are no excuse for cruelty or rudeness.

They do, though, make it essential for honest citizens to scoff at the frauds and snake-oil merchants who pretend that they can, by some social engineering scheme or other, eliminate statistical differences that can't, in the nature of things, be eliminated, and change things that can't be changed.

They also make it perfectly right and proper to push back — or better yet just ignore — those who try to make us feel guilty about facts in the world that are the fault of nobody but Mother Nature.

I guess my Negro Fatigue is showing. Why do we have to keep fussing about this stuff? Can't we all just get along?

Rather than enlarging further on that, though, I'm going to refer you to my old friend Fred Reed's May 5th column, "The Case for Separation."

You think I'm showing Negro Fatigue? Fred's had a chronic case for years.