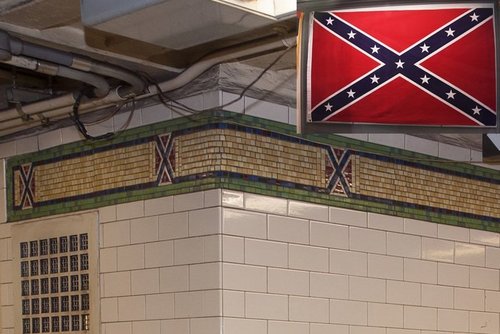 Since the Charleston shootings, GOP officials have been scrambling to comply with Leftist demands that Southern Whites be stripped of visible signs of their Confederate heritage. The GOP has actually been downplaying the Confederacy for years—Jeb Bush conspicuously removed Confederate banners and insignias from the Florida statehouse back in 2001. [Jeb Bush Ordered The Confederate Flag Removed From Florida Capitol 14 Years Ago, By Scott Conroy,Huffingtonpost.Com, June 19, 2015] (But the GOP’s efforts to dump the Mississippi state flag including the Southern Cross were frustrated when a majority of the population, including almost a quarter of the black population, voted to retain it).

Party operatives are stupid enough to believe that black votes are there for the taking if they run down the Confederacy ferociously enough; and that white Southerners will remain Republican no matter what. Plus of course the GOP’s whorish Big Business backers have capitulated, as when they withdrew support from the Boy Scouts of America for not accepting openly homosexual scoutmasters. But it is not so much blacks who seem offended by the Battle Flag (in South Carolina as much as 40% of the black inhabitants are content to leave it at the Capitol) as it is the national Main Stream Media—and above all the neoconservatives.

Neoconservatives have long stood out from other Republicans and members of Conservatism Inc. by virtue of the intensity of their loathing for the white South. And, as I demonstrate in my books on the American Conservative Movement, they have an almost total lock on the Conservative Establishment. The funding, media access, and all the leading publications of the movement are now controlled by neoconservatives. Other branches of conservatism survive, but they are either marginalized, like paleoconservatism, or merely tolerated dissent, like the Catholic Straussians and the socially leftist Libertarians—especially the ones, like the Randians, who vociferously support Israel.

Although neoconservative anti-Christian broadsides continued through the 1980s, with such Commentary contributors as Ruth Wisse and Hyam Maccoby, the Christian enemy took a back seat to other bêtes noires after the neoconservatives began to cultivate the Religious Right as part of a pro-Israel alliance.

But the neoconservatives were still in the forefront of South-bashing for decades, from their organized defamation of Mel Bradford, the conservative Southern candidate for the directorship of the National Endowment for the Humanities in 1981, through the crusade to remove  Mississippian Senate Majority leader Trent Lott in 2002 after he had too fulsomely praised (former segregationist, former Democrat) South Carolina senator Strom Thurmond on his hundredth birthday, to the bile they are now pouring on the already-isolated defenders of the Southern cause.

None of this need surprise us. The persistent neoconservative prejudice against the South sprang from the ethnically parochial culture in which the older generation of neoconservatives grew up. In my youth, I was struck by the malice with which New York Jewish visitors to Florida described their road trips through the land of “rural bigots.” Next to the Germans, whom they assured me—the child of Austrian Jewish immigrants—were all Nazis, these Southern “anti-Semites” were the most unpalatable humans they were forced to share the planet with.

Neoconservative beneficiary National Review Editor Rich Lowry referred in a recent column to “institutionally racist backwater” that was the white South before both government reconstruction efforts and the influx of Northern suburbanites redeemed it. That is a polite way of expressing the anti-Southern bigotry that I heard from New York Jews in the 1950s, before the South ceased to be the South.

In what looks like a staggering effort to outdo the media Left, the quintessentially neoconservative New York Post ran a column by Lou Lumenick (email him) on June 25, demanding that we retire “this much-loved but undeniably racist artifact,” the movie Gone with the Wind, from TV and movie theaters. [‘Gone with the Wind’ should go the way of the Confederate flag]. Although Lumenick and his patrons do not find this film classic to be as much in need of censorship as other more offensively pro-Confederate movies like Birth Of A Nation, what makes Gone with the Wind particularly “insidious” is its “subtle racism”—disguised by the fact that its black co-star received an Academy Award.

Subsequently, the New York Post uncovered more insidious evidence of pro-Confederate pollution, this time in the Big Apple. It seems that the German Jewish press magnate Adolf S. Ochs, who moved his operations to New York from Chattanooga, Tennessee, had “strong ties to the Confederacy.” His mother Bertha Levy Ochs was a charter member of the Daughters of the Confederacy, and Bertha’s son, who set up the New York Times, brought her illiberalism to the neocons’ home base on the Hudson. Ochs even managed to have a mosaic with a design allegedly resembling the Battle Flag inserted in a wall in the subway station at Times Square. (See above)[Confederate flags adorn this Times Square subway station, By Georgett Roberts and Amanda Lozada, June 25, 2015]

(This is an interesting inadvertent reminder that there were Confederate Jews).

Perhaps the most colossal display of anti-Southern bigotry was produced by the Wall Street Journal-Weekly Standard luminary Max Boot. Writing in Commentary, Boot expressed impatience that the war against Southern symbols has stalled at halfway measures. According to Boot, we should not at this very late date just be getting rid of Confederate flags. Years ago, enlightened Americans should have followed “conservatives” like him in calling for the renaming of every landmark or street located in the former Confederacy that bears the name of a Confederate leader:

Remembrance does not require public displays of the Confederate flag, nor streets with names such as Jefferson Davis Highway — a road that always rankles me to drive down in Northern Virginia. Such gestures are designed to honor leaders of the Confederacy, who were responsible for the costliest war in American history — men who were traitors to this country, inveterate racists, and champions of slavery.

Boot implicitly compares the slaveholding South to Nazi Germany. And while he thinks we cannot prevent the descendants of German or Confederate soldiers from honoring the memories of fallen ancestors, he believes no public space can be conceded to those who revere what he considers to be a “vile cause.”

As I read this call for further humiliating the Southern whites, who have been the cannon fodder in so many neoconservative-incited wars, I thought about the strange situation that has made Boot, a Russian Jewish immigrant, a towering figure in American “conservatism.” He has ascended so high in our weird society that he is now dictating the unconditional surrender of Southern white goyim to the Cultural Marxist Zeitgeist.

This grotesque act begs for comparisons. It might be like a Palestinian activist who is mysteriously acclaimed as a spokesman for the Israeli conscience and then orders Israelis to take down all monuments to their Jewish past.

Needless to say, Israelis would never oblige such an impudent poseur—unlike our Southern white Republicans.

Still, to their credit, neoconservatives do not bleed all over the floor confessing their own past racist insensitivities. They simply speak as the conscience of the world. Whether we have Charles Krauthammer reproaching Trent Lott for his “historical blindness” in not vibrating to the greatest moral event in American history, the successful Civil Rights movement personified by MLK, or the entire neocon press coming down on the hapless Professor Bradford in 1981 for not appreciating the achievement of Lincoln in making us all more equal, or the stragglers in the crusade against Southern symbols, neoconservatives specialize in imposing their selective morality.

Thus Southern whites are excoriated for their past sins of racism—but Jews living in New York City are allowed to complain about blacks and even describe them with belittling epithets when they misbehave in Jewish neighborhoods.

For example, neoconservative progenitor Norman Podhoretz in February 1963 published in Commentary a thoughtful essay My Negro Problem—and Ours in which he expressed very frank feelings about blacks, miscegenation, “Negro anti-Semitism” and Negro “paranoid touchiness.” No-one did a Mel Bradford or Trent Lott on him. But in era when even Hilary Clinton is questioned because her husband’s campaign used Confederate symbols, perhaps they will now.

The hatred I still feel for Negroes is the hardest of all the old feelings to face or admit, and it is the most hidden and the most overlarded by the conscious attitudes into which I have succeeded in willing myself. It no longer has, as for me it once did, any cause or justification (except, perhaps, that I am constantly being denied my right to an honest expression of the things I earned the right as a child to feel). How, then, do I know that this hatred has never entirely disappeared? I know it from the insane rage that can stir in me at the thought of Negro anti-Semitism; I know it from the disgusting prurience that can stir in me at the sight of a mixed couple; and I know it from the violence that can stir in me whenever I encounter that special brand of paranoid touchiness to which many Negroes are prone.