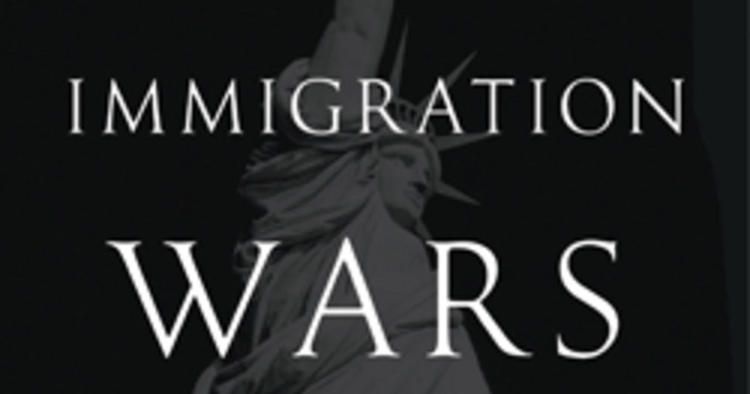 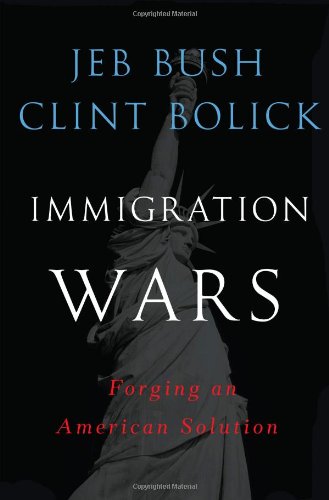 As you read through a book, as the pages clock by, hints of the author’s underlying attitudes accumulate until, by halfway through the thing, you have a clear picture of those attitudes.  In the case of a certain type of author—a person with not much power of imagination or self-examination—you may have a clearer picture of his attitudes than he has himself.

So with  Immigration Wars, the new book by Jeb Bush and Clint Bolick.  I just got through reading the book on Kindle: the square brackets in what follows refer to locations in the Kindle text.

Yes, there are two authors there, and you can speculate for yourself about who did how much of the writing. But, given that Jeb Bush is an ambitious politician, and that now is about the right time for ambitious politicians to lay down markers for the 2016 election, I doubt there is a single sentence here that Jeb Bush didn’t sign off on—whether he actually wrote the book or not. So I am blaming him for it.

So what insights into this possible 2016 presidential candidate do we get from  Immigration Wars?

The main one I got: Jeb Bush just doesn’t like Americans very much.

Immigration boosterism always has a whiff of this about it.  “Jobs Americans won’t do”—because they are too spoiled and lazy!  “Skill shortages”—resulting from Americans being too dumb!

Bush packs both of those into a single sentence:

It is essential that we have an ample supply of workers both for labor-intensive jobs that few Americans want and for highly skilled jobs for which there are inadequate numbers of Americans with the skills to fit them. [1207]

Business-wise we’re not up to much, either: “Like most immigrants, Hispanics are tremendously entrepreneurial.” [2206] As opposed to those dull, risk-averse non-Hispanic and non-immigrant Americans!

As VDARE.com readers know, this last assertion is demonstrably untrue.  Indeed, Bush’s book abounds in long-debunked falsehoods—so much so that, by fifty or so pages in, the well-informed commentator can’t resist doing a search on “44 percent.”  Yep, there it is!—“Whereas Republicans had won 44 percent of the Hispanic vote …” [2067]

El Paso, Texas, is one of the nation’s three largest safe cities. [990]

Yes, because the black population is unusually low: 2.8 percent, only a tad higher than Salt Lake City’s 2.5 percent.

The deficiencies of us actual citizens of the U.S.A. are even spiritual.

Immigrants are unlikely to be complacent about the freedom and opportunity that for them previously was only a dream and was gained only through great effort and sacrifice.  Our nation constantly needs the replenishment of our spirit that immigrants bring. [834]

The accumulating impression left by Jeb Bush: Americans are not much good for anything.  Only immigrants, with “their energy, vitality, talent, and enterprise” [992] can overcome the lassitude, torpor, mediocrity, and complacency of the native-born.

We get a revealing metaphor here, one that puts me in mind of old Soviet propaganda movies:

When immigration policy is working right, it is like a hydroelectric dam: a sturdy wall who valves allow torrents of water to pour through, creating massive amounts of dynamic energy. [202]

Presumably that is energy that we dull natives could not possibly generate on our own.

How on earth did the nation cope under the low-immigration regime of the 1950s?

Our failures extend into the reproductive zone:

America’s birthrate has fallen below the level needed to replace the current population. [897]

To keep our welfare programs going, says Jeb Bush, we need a steady flow of immigrants.

The counters to that are well-known to anyone decently well-read in immigration topics.  The best-known counter includes the phrase “Ponzi scheme.”

And then there is Mark Krikorian in his 2008 book The New Case Against Immigration. observing that American birthrates might increase if immigration were to be curtailed.

Economist Richard Easterlin has long argued that one of the causes of the postwar Baby Boom was the higher wages young people were able to earn at the time because of the tight labor market caused by restricted immigration. (Op. cit., p.199)

So Jeb Bush’s view of the American people has us always trending towards a condition of listless, ignorant, complacent, un-entrepreneurial, non-reproducing sloth—unless continuously energized by floods of immigrants.  As I began by saying, he just doesn’t much like us very much.

Isn’t it unwise of an ambitious politician to reveal that much about himself to the public?

Why would any American vote for a man who holds us in such contempt?

It can’t be that Jeb is actually stupid.  He is too accomplished to be seriously stupid.  Probably he is, like his brother George W. Bush, in the top decile of smarts.  But, also like his brother, he comes off as lazy-minded and unimaginative, satisfied that he has mastered a topic once he’s memorized a collection of clichés about it.

Certainly the clichés come thick and fast in Immigration Wars:

Emma Lazarus is unaccountably left out. But no doubt that was an oversight.

I can’t believe, either, that Jeb Bush is driven by conscious guile.  With the Bushes, what you see is what you get.  These are no Clintons or Nixons.  Whereas Hilary Clinton always brings to my mind Dr. Johnson’s remark about Alexander Pope (“He could not drink tea without a stratagem”), I can’t imagine having such a thought about any Bush. They are transparently, sociopathically, self-interested.

A few years ago Steve Sailer came up with a sort of Kevin MacDonald-ish theory of the Bush clan: they were practicing a “group evolutionary strategy,” optimizing their collective fitness at the expense of everyone around them—including, of course, the historic American nation.

Given that the Bush clan embraces a network of kith, kin, and business associations on both sides of the U.S.-Mexico border (Jeb’s wife is Mexican-born and the family has many odd connections with the filthy-rich Mexican oligarchs), I’ll allow that the theory has potential explanatory power. But I don’t think we need to make recourse to biology here.

Most likely Jeb Bush is writing in a natural, effortless way for his fellow Tutsis, his fellow members of the Overclass.  That he despises us Hutus is of no importance: so do the other Tutsis.  Funneling candidates through the presidential primary process is now an entirely Tutsi operation, with Hutus allowed to participate only as light relief.  This is a book for the funnelers.

Fortifying that explanation is the fact that Immigration Wars incorporates not merely one but two key components of Tutsi ideology: not just immigration romanticism but educational romanticism, too.  (Over-educated themselves, the Tutsi aristocracy sees education as a balm for all wounds).

In fact, we get a whole chapter titled “Immigration and Education.”

The two romanticisms don’t sit well together.  If

Then, once we have fixed the education system as Jeb Bush proposes, why would we need skilled immigrants?

We would not need nearly so many immigrants if we were able to produce more highly skilled American students, workers, and creators. [1880]

But then wouldn’t we lose all that “energy, vitality, talent, and enterprise” that is supposedly roaring in through the dam?

Jeb’s not going to let a little contradiction like that slow him down.  In the very next sentence he heads off into

a second education challenge: the failure of our education system to provide high-quality opportunities for immigrant schoolchildren. [1881]

But why impose these unnecessary challenges on ourselves?  As I noted satirically in my 2009  book We Are Doomed:

If challenges are so good for us, why not create a few more?  I suggest flooding some low-lying cities; causing landslides on inhabited hillsides with well-placed explosive charges; letting loose a few dangerous pathogens…Or why not set off a nuclear weapon or two in populated areas to see how well we meet the challenge of swamped hospitals and mass evacuation? (p. 29)

And here, too, Jeb Bush is either telling careless lies, or else has not kept up with developments. He says:

Florida’s [accountability system] holds each student to the same high standard of achievement. It does not focus on a student’s ethnic background or socioeconomic status. [1920]

Florida's public school students will be judged in part by race and ethnicity, under new education benchmarks approved this week...According to the plan, by 2018, the state wants 90 percent of Asian students, 88 percent of white, 81 percent of Hispanics and 74 percent of blacks to be at or above reading grade level.

As with Emma Lazarus, we are at least spared Head Start.

The word “vocational” occurs nowhere in this book.

On the stopped-clock principle, Jeb Bush does get a couple of things right.  He is rightly critical of chain migration and supportive of E-Verify.

It was nice, too, to see a VDARE.com article (The myth of the Hispanic Republicans, by Sam Francis, January 23, 2003) quoted in the text and referenced in the end-notes. (His argument is not seriously addressed). But it would have been even nicer had Jeb Bush (or Clint Bolick, or their researcher) not mentioned Sam Francis in the present tense—apparently unaware that poor Sam left this world eight years ago.

Bush also takes a feeble stand against the “path to citizenship” for illegal aliens.

A grant of citizenship is an undeserving [sic] reward for conduct that we cannot afford to encourage. [598]

So, Bush says, illegals should get permanent residence, which in most cases is all they want, but not citizenship, which is much more important to Democratic vote-farmers than it is to the crop.

That particular policy proposal turns out to have been ill-timed.  Immigration Wars went to press a few days before the Senatorial Gang of Eight revealed their amnesty-with-citizenship plan.  Finding himself to the right of GOP Wonder Boy Marco Rubio, Bush has this week been engaged in what my automobile’s GPS gadget calls “recalculating.” But, especially given that Bush had earlier indicated that he favored the “path to citizenship,” it’s an embarrassing fiasco, causing talk show host Mark Levin to suggest Bush hadn’t read his own book. (Contrary to my assumption above—although VDARE.com Editor Peter Brimelow, who has Washington D.C. experience, thinks Levin may be right).

These small qualifications aside, this is a book of passionate, gushing immigration romanticism:

Immigrants...are absolutely necessary to our future prosperity.  But perhaps more than anything else, immigrants are essential for reminding us how special our nation is, and how hard it is to maintain freedom. [1855]

Immigration, on the romantic view, is in any case governed by a sort of conservation law, independent of its “absolute necessity.”  There is a fixed, irresistible quantity of immigrants, determined by some cosmic principle, and if you don’t let them in legally, they will come in illegally.

Attempts to seal the border are therefore futile:

For instance, a goal of sealing the border is hopeless without creating an immigration pipeline that provides a viable alternative to illegal immigration. [288]

Oh yeah? Perhaps we could take up a collection to send Jeb Bush on a fact-finding trip to Japan—or Israel.

Jeb Bush has written (or at least signed) a shallow, dishonest and—in its malign intent towards his fellow-citizens, in some sense treasonous—book.

So, on present form, he will be the 2016 Presidential nominee of Conservatism Inc./ The Stupid Party.