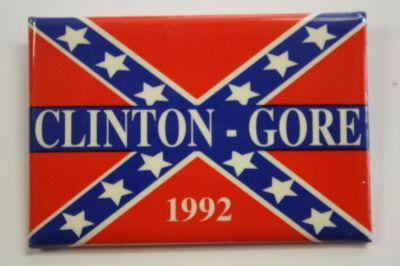 The Confederate Battle Flag being seen as racist or even controversial is relatively recent. As you can see above, Southerners Bill Clinton and Al Gore used the flag to try to appeal to White voters during their presidential campaigns. Wait for the MSM to ask Hillary Clinton about this.

Here's Johnny Cash on the Muppet Show with Confederate Battle Flags in the background along the Stars and Stripes.

There was also a far-Left group, the Young Patriots Organization, that used the Confederate flag as an anti-racist emblem during the 1960s. The YPO worked in solidarity with the original Black Panther Party and other groups.

The MSM-led effort against the Confederate Flag in South Carolina is just the latest example of Cargo Cult politics, as a feel-good token effort is used to substitute for real thought. (At least no one is throwing poop yet, unlike in South Africa.)