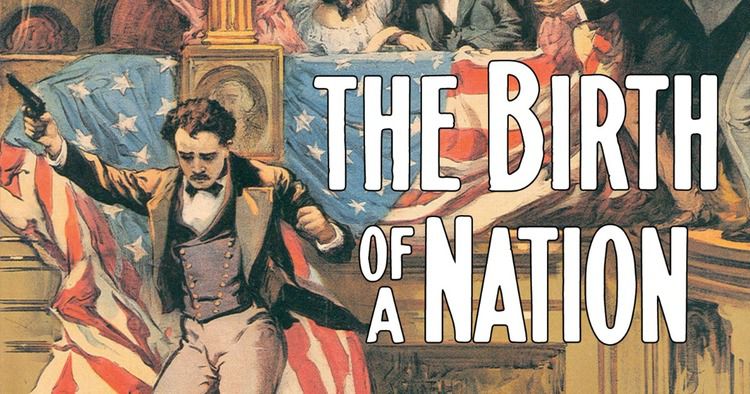 “THE BIRTH OF A NATION” at 100—Racial Chaos Unleashed in St. Louis 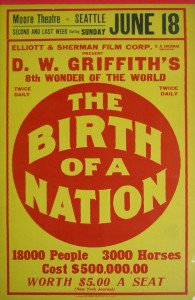 culminating in a de facto black takeover of the St. Louis Police Department and brawls during city council meetings. It seems strangely fitting these events are taking place just as the American Main Stream Media uneasily commemorates D. W. Griffith seminal movie, The Birth of a Nation, [Watch it here] which premiered 100 years ago tonight (February 8) [‘Writing History With Lightning': The Birth of a Nation at 100, by Rachel Janik, Time, February 8, 2015].

Black St. Louis Aldermen, led by Terry Kennedy, have been pushing for a police oversight board to investigate so-called police misconduct for more than a decade. Of course, the real reason is that black men like Brown and the late VonDerrit Myers frequently engage in unlawful actions requiring police to use deadly force.

In Myers’s case, his family claimed the 9 mm he pointed at a police officer was nothing more than a sandwich [VonDerrit Myers Jr.’s family responds to police version of fatal shooting, St. Louis American, by Rebecca Rives, October 16, 2014]. As with Michael Brown and the footage that emerged of him stealing cigars, in the case of VonDerrit Myers pictures on social media accounts soon emerged of him brandishing his (stolen) 9mm pistol [Vonderrit Myers, Jr. showed off his guns before shooting, by Chris Hayes Fox2Now, October 13, 2014].

But with St. Louis being a 49 percent black city, the black aldermen aren’t happy to see white cops like Darren Wilson being found innocent of wrongdoing by grand juries. The idea behind a civilian review board is to make sure that any future Darren Wilsons will not be allowed to escape. 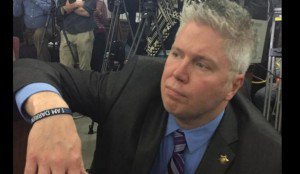 We got a look at how this would play out with a hearing held in St. Louis on the civilian review board. During the hearing, Jeff Roorda, the business manager of the city’s police union, attempted to speak on the dangers of a civilian oversight board. Roorda is a Democrat, but he is also a white man who was wearing an “I am Darren Wilson” bracelet.

Thus, when he attempted to speak, an unidentified black person in attendance shouted, “You white supremacist mother****er. Get the f*** out of here” [St. Louis Meeting on Cop Oversight Erupts into Brawl: ‘White Supremacist Motherf*cker’, by Evan McMurry Mediate, January 29, 2015].

But the crowd became unsettled when police officers began testifying in opposition to the bill. At times, Alderman Terry Kennedy, who chairs the committee, struggled to keep order. The noise in the room spiked as police officers attempted to testify.

At that point, Jeff Roorda, the business manager of the city’s police union, stood and called for order. Roorda was wearing a wristband in support of Darren Wilson, a former Ferguson police officer whose fatal shooting of 18-year-old Michael Brown last summer sparked months of civic unrest.

After Roorda stood up, the crowd grew louder.

“Excuse me, first of all, you do not tell me my function,” responded Kennedy, who has championed the issue of civilian review for more than a decade.

Standing in the aldermanic hearing room packed with people shoulder-to-shoulder beneath a ceiling painted with allegorical images of Western democracy [PK: my emphasis], Roorda shouted back at Kennedy.

Others began yelling, then pushing and shoving as officers struggled to maintain control. Some in the crowd scrambled to leave the packed room, which has only two exits.

The commotion lasted for about 15 minutes until order was restored.

The St. Louis brawl, taking place “beneath a ceiling painted with allegorical images of Western democracy,” is a reminder of not only the fragility of race relations in America, but of the unmentionable fact that the scenes portrayed in the movie are just as pertinent today.

“They’d answer their calls when they got them, but as far as interrupting criminal behavior on their own, why in the world would they do that when their employers aren’t even supporting them?” Roorda said.

“They would be incredibly reluctant to do their jobs and St. Louis would be a much more dangerous place than it is now. Nobody wants to be the next Darren Wilson”

The Birth of a Nation was a brief moment in history when “the megaphone” was controlled by people outside of New York City and Hollywood [“Birth of a Nation” at 100 Years Old, by Andrew Joyce, The Occidental Observer, February 6, 2015].

What was the result? Supposedly, according to PBS,

African-American audiences openly wept at the film's malicious portrayal of blacks, while Northern white audiences cheered. The film swept the nation. Riots broke out in major cities (Boston and Philadelphia, among others), and it was denied release in many other places (Chicago, Ohio, Denver, Pittsburgh, St. Louis, and Minneapolis). Gangs of whites roamed city streets attacking blacks.

[D.W. Griffith’s Birth of a Nation, by Richard Wormser, PBS]

Of course, today gangs of blacks are already roving across the country and beating white people, as described in books like Colin Flaherty’s ‘White Girl Bleed A Lot.’ And they have much more than one film egging them, on as television and Hollywood executives continually produce shows and movies depicting white people as the perpetual oppressors of blacks.

The commanding heights of the culture also seem eager to promote racial strife, from the loftiest academics to black men of the cloth like the Reverend Jeremiah Wright. Thus, it’s not surprising that even the President of the United States sides with black rioters and almost seems to egg them on. 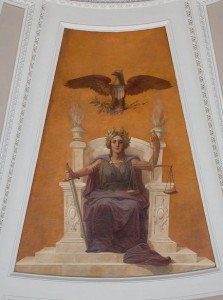 We’re witnessing the birth of a new nation 100 years after Griffth’s film. We can see its birth throes in the riots and fights taking place beneath the “allegorical images of Western democracy” in St. Louis.

And rather than E Pluribus Unum, this new country has its own immortal motto—“You white supremacist mother****er. Get the f**k out of here.”