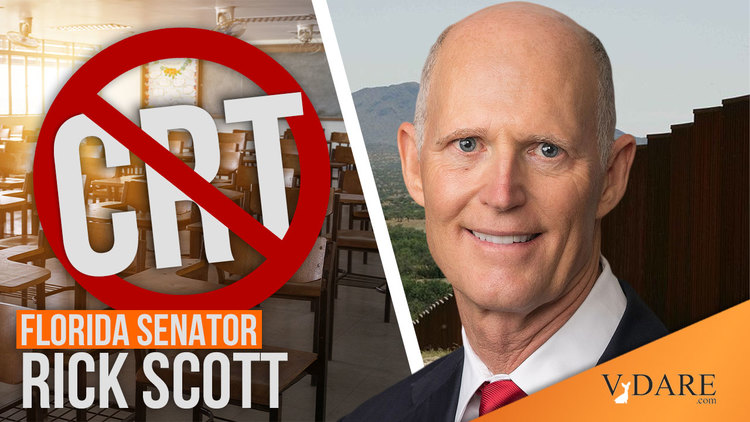 The GOP’s “Rescue America” Plan Is Encouraging. But More Is Needed For The Party To be Truly America First

Florida Senator Rick Scott, chairman of the National Republican Senate Committee, released a platform last week that might serve as the GOP’s “Contract with America” for 2022 [Rick Scott's 'Plan to Rescue America' includes promise to name border wall after Trump, by Dominick Mastrangelo, The Hill, February 23, 2022]. The 11-point plan is mostly standard talk about the economy and jobs. But three points will stand out to VDARE.com readers, the first one being our signature issue. The plan emphasizes the invasion at the border and promises tough measures to restore American sovereignty. Second, it advocates for tough-on-crime policies that have fallen out of favor with the political elite. Third, it vows to wipe out Critical Race Theory. In other words, the GOP knows identity issues motivate voters and will help the party secure victory in 2022. Yet the details reveal that Republicans must improve to truly be the America First party.

The first two paragraphs of Scott’s plan paint a dire picture of America:

The militant left now controls the entire federal government, the news media, academia, Hollywood, and most corporate boardrooms – but they want more.  They are redefining America and silencing their opponents.

Most immigration patriots would agree and see all those as real problems. Importantly, the two paragraphs show that the GOP isn’t entirely obsessed with economic growth or tax cuts. It addresses the culture war.

But on to the three big issues for VDARE.com and its readers: immigration, crime, and race.

We will secure our border, finish building the wall, and name it after President Donald Trump.

That sounds good, but it is, unfortunately, the weakest part of Scott’s plan, as the elaborating language shows:

We welcome those who want to join us in building the American dream, immigrants who want to be Americans, not change America. We are a stronger nation because we are a nation of immigrants; but immigration without assimilation makes us weaker. Politicians from both parties talk big about border security and do nothing. We are done with that.

“Nation of immigrants” should raise eyebrows because it’s a standard left-wing talking point in opposing border control and immigration restriction. The good news is, the platform does not call for increasing immigration. It also demands that immigrants be prohibited from receiving government assistance. It promises tougher immigration enforcement, building the wall, more money for border security, and defunding sanctuary cities. It vows to bar entry to foreigners who “do not love America,” although how that would be enforced is unclear.

We oppose cultural segregation. We believe in the ‘melting pot’, where people from many backgrounds go all-in on becoming Americans, “one Nation under God, indivisible, with liberty and justice for all.”

That’s an interesting statement from an elected Republican. On one hand, it repudiates multiculturalism. On the other, it endorses a creedal nationalism that has proven obsolete in the age of identity politics and Critical Race Theory. Still, it’s better than demanding Republicans speak in Spanish.

The most curious item is the bullet point on Amnesty in which “Amnesty” is not used:

We will oppose all “comprehensive” immigration reform measures until we stop the lawlessness on our border, and our border is secured.

On the plus side, it stands as a “No Amnesty” position for the time being. It also attacks the specific phrasing that Democrats use to sell Amnesty now. They all call it “comprehensive immigration reform.” Problem is, it implies Republicans are open to Amnesty. What standard might stopping “lawlessness on our border” entail? I recommend a better bullet point: “No Amnesty. Period.”

Last year, Scott did try to craft an Amnesty. He would have legalized illegal aliens who came to the U.S. as minors [Rick Scott Says He ‘Does Not Support Amnesty’ While Crafting Amnesty Plan, by John Binder, Breitbart, March 21, 2021]. That idea, fortunately, went nowhere, but it does show the Florida senator is open to the idea.

While nothing in Scott’s plan is especially bad, what it leaves out is bad. It did not include ending birthright citizenship or demand mandatory e-Verify. And, most importantly, it does not suggest curtailing legal immigration. These sins of omission demonstrate that the GOP has room to grow on immigration patriotism.

The plan’s position on law and order is much better. It vows to end soft-on-crime policies, refund the police, and maintain “zero-tolerance for ‘mostly peaceful protests’ that attack police officers, loot businesses, and burn down our cities.” In contrast to some Republican attempts at criminal justice reform, the plan vows to reaffirm mandatory minimum sentencing and defend qualified immunity for police, which protects officers from frivolous lawsuits. The only concession to “criminal justice reform” is banning no-knock warrants for non-violent crimes, which is hardly satisfying to Leftists. The plan also makes an implicit appeal to those outraged by the treatment of January 6 protesters. It claims Republicans will make it a federal crime for any prosecutor, including those in the U.S. Department of Justice, to pursue prosecution based on “political ideology.” That’s good news. Leftists are using state power against political dissidents.

Also encouraging is the plan’s take on Critical Race Theory. “Government will never again ask American citizens to disclose their race, ethnicity, or skin color on any government forms,” its second point avers. This translates this into removing diversity training and critical race theory from the military and schools, and opposition to racial quotas in education and hiring. The plan pledges to remove federal funding and tax exemptions from universities that have racial quotas. While couched in cucky eyewash about equality, race denial, and colorblindness, it would still eliminate many anti-white elements in American society, from affirmative action to woke indoctrination in schools. It takes the issue seriously.

The final point of the plan states: “We are Americans, not globalists.” The bullet points for that are mostly platitudes about trade, foreign aid, China, and (somehow) support for Israel. But it is a good slogan for Republicans. Before Trump, they never would have uttered “globalist.” Now they use it in their campaign pitches.

The platform is not without its faults. Its immigration patriotism is lacking. It gives some wiggle room for some form of Amnesty. It fails to call out anti-white racism and insists that pretending race doesn’t exist will solve our problems. On the plus side, though, it shows that the GOP finally understands we can’t stop illegal immigration with Amnesty, we can’t stop crime with soft-on-crime policies, and we can’t allow the Left to indoctrinate our people with ideological poison under the guise of diversity.

It’s a decent pitch for 2022. It’s a move away from Business First. But to become truly America First, the GOP has more to do.