Dara Lind [Email her] has a frightened (or possibly outraged) piece at Vox about one more episode in the dark night of Fascism under the rule of Trump—refusing to let legal immigrants leech off the welfare system:

Or getting insured through the Children’s Health Insurance Program, or getting assistance to heat their homes.

The Trump administration is working on new rules that would allow the government to keep immigrants from settling in the US, or even keep them from extending their stays, if their families had used a broad swath of local, state, or federal social services to which they’re legally entitled — even enrolling their US-born children in Head Start or the Children’s Health Insurance Program (CHIP).

A draft of the new regulation, posted first by Vox, can be found at the bottom of this article or on DocumentCloud. (If the DocumentCloud link does not work for you, here is a direct link to the PDF.) Reuters originally reported on the existence of the draft regulation Thursday.

The rule wouldn’t make it illegal for immigrants to use public services that are open to everyone regardless of immigration status, or that are available to their US-born children. But it would make it possible for the government to deny their applications for a new type of visa, or a green card, if they’d used those services. In other words, it could force them to choose between taking advantage of available social services, and their family’s future ability to stay in the United States permanently.

If approved and finalized, the regulation would vastly expand the federal government’s power to bar an immigrant from entering the United States, obtaining a new visa, or becoming a lawful permanent resident (green-card holder) by labeling the immigrant a likely “public charge.”

Right now, the government can only consider use of cash benefits, like Temporary Assistance for Needy Families, in “public charge” determinations. The Trump administration wants to give officials the power to look at use of other benefits as well, including:

Apparently they have never heard at Vox that immigrants aren't supposed to be a public charge.

Not entirely their fault—it's only a short period of time since most of them were in high school, and the Public Charge requirement for legal immigration hasn't been enforced for some time.

In 2001, we published Whatever Happened To Deporting Immigrants As a Public Charge? by James R. Edwards, Jr.  of the Center For Immigration Studies which explained that

Contrary to the “Open Borders” myth, Americans have always tried to prevent the immigration of anyone likely to become a “public charge” – dependent on public charity.  Massachusetts enacted the earliest public charge laws in 1645. But the Immigration and Naturalization Service reports that just 12 immigrants were deported on public charge grounds during the 1981-90 decade.  Since then, the INS has stopped listing public charge as a separate category of reasons for deportation.

This falling rate of deporting public charges contrasts markedly with the latest data on the immigration “welfare magnet.”  Nearly a fifth of all immigrant households are enrolled in welfare programs, compared with 13.3 percent of native households. The poverty rate for immigrants is twice that of native-born Americans.  Twenty-two percent of U.S. residents living in poverty are immigrants and their U.S.-born children.

The immigration law provides for the deportation of aliens who rely on public assistance for a substantial part of their livelihoods within five years of entering the United States. The cause of becoming a public charge must precede arrival in America. Aliens bear the burden of proving that the circumstances causing public dependency came about after arrival. This part of the law has remained largely the same since 1891.

The "Public Charge" requirement is still in the law—it's been watered down by the executive decisions of previous administrations, but there's a new Sheriff in town.

Here's an excerpt from 10 Questions For The Gang Of Eight, posted by then-Senator, now Attorney General Jeff Sessions in 2013:

How does the bill ensure that federal public charge law is enforced and that illegal immigrants do not access the welfare state through the granting of green cards and citizenship? Federal law explicitly bars entry to those likely to rely on federal assistance. Yet an estimated one in three immigrants currently receive some form of federal welfare. An inquiry from the Ranking Members of Senate Budget, Finance, Judiciary, and Agriculture Committees revealed that federal public charge law is currently unenforced and is, in fact, actively undermined by the federal government. The president of the ICE Council said of this statutory protection for taxpayers: “We are not permitted to enforce that statute. Period.” DHS confirmed it was unable to identify a single public charge within the United States in 2012 (having checked records through August). With respect to those illegal immigrants who would receive amnesty under the bill, sponsors have likened their initial probationary legal status to non-immigrant visas. Under a faithful reading of current law, no legal applicant would be eligible for a non-immigrant visa if they are likely to live off public assistance at any future point. Yet the Gang of Eight’s framework does not mention a public charge screening process (which is different from a work requirement) for illegal aliens seeking legal status—effectively establishing a lower threshold for illegal immigrants than for legal immigrants. Additionally, current green card holders are eligible for a vast array of federal benefits, including Medicaid, food stamps, and cash welfare, indicating that today’s low-income illegal population will become eligible for these benefits once they attain green cards as the proposal outlines.

I repeat, the Public Charge law is still on the books, waiting for someone to enforce it. That's why it's wrong for this guy to say "by fiat", as if Trump didn't have this power:

Trump wants to income-test the entire immigration system by fiat. In a report from last year, I estimated that this would dramatically expand inadmissibility, and enable the deportation of up to 1.9 million currently lawful aliens. @DLind @itscaitlinhd https://t.co/SvlU1ZhPz5 pic.twitter.com/YkcpgOK5KK

And if they do it, it'll be a good thing, and popular, too: 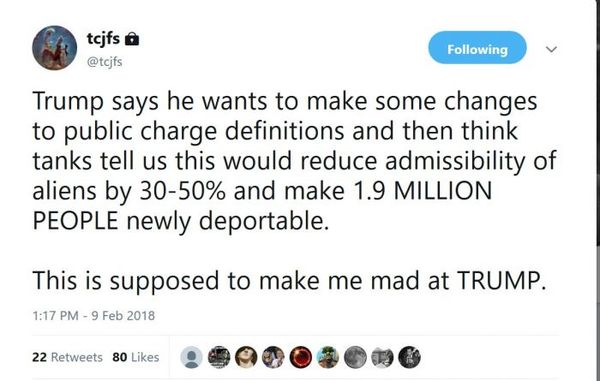