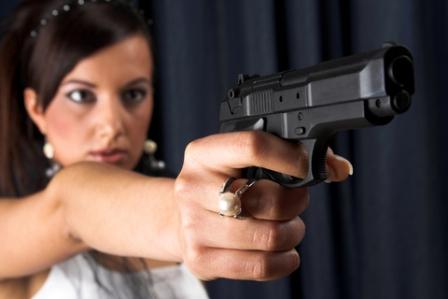 Austrian citizens are permitted to purchase long guns, and many of them are doing so, apparently in fear of the Muslim invasion promoted by Germany.

In particular, women are buying guns, probably because they are aware of the Muslim propensity for rape and especially of infidel women — something that the Koran recommends.

The blog BareNakedIslam has started a post where Europeans can tell their stories of the new Muslim invasion. So far, most are women.

In Austria, there has been a rapid increase in the sales of weapons to private individuals. All long guns are currently completely sold out. Those arming themselves are primarily women. Austrians have begun to arm themselves with projectile weapons. If anyone wants to buy a long gun in Austria right now, too bad for them. All of them are currently sold out. This is reported by the Austrian outlet ‘Tiroler Tageszeitung’. It provides accessible information regarding the purchasers, which shows that all the stock is sold out.

“We cannot complain about lack of demand” says Stephan Mayer, a gun merchant.

He further claims this is the case for the last three weeks. The huge demand has its roots in fears generated by by social changes. “People want to protect themselves,” says Mayer. ”Nonetheless, the most common purchasers of arms are primarily Austrian women They are buying tear [pepper] sprays, which are much in demand,” says Mayer.

He claims that guns are truly in great demand, and more potential customers are entering the market than ever before.

Till not too long ago, the major customers of gun shops were mainly sport shooters or rangers. But the most common customers now are people who are worried about their personal safety, yet who had never had any involvement with weapons prior to this.

The Austrian Minister of Interior must be informed by the potential gun owner of the reason why they wish to have a permit to own a gun. On internet pages, there also appeared those who give this as a reason. Projectile weapons in categories C and D, that is rifles and shotguns, may be purchased by every adult Austrian, if he submits a request with the reason [to own the gun]. These may be for hunting, sport shooting or self defense.

Migration, in all of human history, comes with many worries, says Viennese sociologist Girtler. Some people see the main cause of danger in these foreigners, who have this aggression in their blood. Girtler stated that this fear is unfounded. According to this sociologists, no such claims should ever be published about migrants or any groups.

The Austrian journalist Wittinger (?) commented on the situation as follows: if the local residents are buying weapons because they want to use them to protect themselves against hunger and terror from the migrants, then something is very wrong here. Shotguns will not, after all, solve any immediate problems, quite the contrary. This article is published on the main page of SKA.

Islamists are sending this message: ”We will cut the heads off unbelieving dogs even in Europe. Look forward to it, it’s coming soon!” German security authorities, including the Federal Minister of the Interior Thomas de Maiziere, are again on full alert. One of about 500 of their jihadis who are fighting in the Middle East addressed his co-residents back home in a video, in which, in German, he urges the slitting the throats of unbelievers back home, in their country. That is, in Germany.

This is accordingly a new quality of propaganda, and threats which must be prevented. Overall, the Ministry of Interior stated that Germany is in the crosshairs of Islamic terrorists, but that he does not have any indications of specific threats, informs the server of the Czech portal of eurabia.cz with a link to German media.

Islamic State-trained Jihadists are now, as European citizens, returning, or they are trying to infiltrate into Europe as immigrants. More and more the whole thing is turning into the situation that we will experience the much-touted Arab Spring from very close up – right here, at home.

What’s more, many European states are alienating part of their own populace with unfortunate social and multicultural politics, merciless removal of children, unfair seizures, and trading on traditional European values and with policies which are usually less friendly towards conservative and traditional native inhabitants and leans towards that portion of inhabitants who have little trouble with globalization and nonchalant liberalization, removal of traditions, and Islamisation. Yet we will not be able to rely on it that portion of [population] once the Arab Spring comes here. And that will probably be, as they say, closing the barn after the cows are gone…