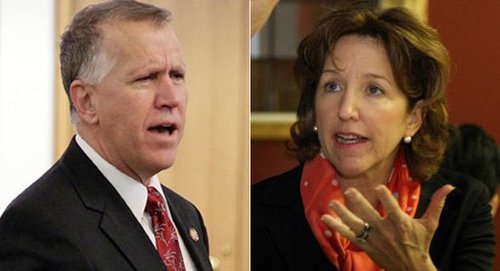 GOP Senate aspirant Thom Tillis, running against Democrat incumbent Kay Hagan in North Carolina, has attracted several rounds of derision from writers here at VDARE.com for his fecklessness on immigration.  For example, two weeks ago, James Kirkpatrick wrote Tillis Closing The Gap In North Carolina, Moves Above 50% of White Vote Despite Continued Stupidity.

Today I received a begging (i.e. fund-raising) email from the Tillis campaign, although I've never signed up with them.  According to the note, contributions to Hagan's re-election run now top $40 million, making this "the most expensive Senate race in American history."

Given what I know about Tillis and his campaign, I was annoyed enough to reply to the email:

This could have been easy.  You could have actually learned something substantial about the most consequential subject of all for the American future: mass immigration — legal and illegal, both.  And then campaigned on it.  You could have had a landslide win.

(Hagan voted for cloture on S.744; you could have cleaned up on that alone — if you'd been willing to understand its significance and then explain it to the voters.)

But you couldn't be bothered to learn about it and, instead, took the "easy" path of listening to a bunch of Repub hack consultants who don't know anything substantive about anything.

I still hope you win, because it's better to have a Republican dumb **** in that seat than a Democratic dumb ****ette.

But it'll have to be without my money.

There's faint hope that such return emails will be read ... but maybe!  So I sent my reply several times, each with a different subject line: "$$$," "Campaign donation," "Down to the wire," and "Closing costs."

And if you'd like to transmit some well-deserved abuse to the Tillis campaign, here you go: info@thomtillis.com