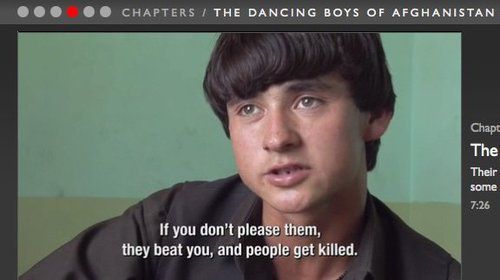 For the not-all-cultures-are-morally-equal file. On Wednesday I watched the documentary The Dancing Boys of Afghanistan on PBS and was appalled, although not surprised. (You can watch the entire 53-minute film on the  Frontline website.)

The documentary is a disturbing journey through the male subculture known as bacha bazi where powerful men keep stables of boys for dancing and sex. Attractive boys are recruited from poor families, who receive money for giving up their child. The boys are persuaded that the tutelage of a wealthy man is an advantage for them. It may seem like fun to the kids when they are learning music and dance, but when the lights go out and other requirements are made, it must be a horrifying moment for an innocent youngster.

The film is surprisingly blatant. Although no sex acts are shown, the slavering lust of adult men for pre-teen boys is omnipresent.

This is a culture that is fundamentally twisted, largely because of the depersonalization of women. Men have sex with women to have children, but for a good time they want a smooth-skinned boy, because women are not even seen as people under Islam. (A recent report cited how a girls’ school in Afghanistan was sprayed with poison gas.) The boys are dressed up as women and instructed to entertain the all-male audience, which is even more depraved.

The following clip gives a sense of what is shown in the film:

I had two strong reactions to the film: first, that Muslim immigration is nothing but trouble and should STOP. We gain nothing by welcoming such a barbaric culture into our midst. We see by the experience of Europe that Muslims don't come to join our communities but to spread their system of religious fascism. The 2000 Census counted 45,195 Afghani-born persons residing in the United States. The Afghanistan Embassy more recently put the number at 300,000. Certainly the 2010 Census will reveal how diverse the population within our border has become.

Interestingly, when a group of Taliban toured the United States prior to 9/11, they were enthusiastically welcomed by Afghans residing in America, like those in Fremont, California (Bay Area community watches Taliban depredations from afar, San Francisco Chronicle, March 18, 2001).

Second, we are wasting our tax money with nation-building in Afghanistan. You can make a case that there is a more educated middle class in Iraq that might eventually accept democratic principles, but Afghanistan is backward even by Muslim standards. Killing Taliban is worthwhile, but the idea that Afghanistan can possibly be more than a primitive backwater in the next century is a pipe dream. Nation-building there is an absurd waste, particularly given America's financial situation. Let the American armed forces kill the bad guys, and leave the social work to the charitable NGOs.