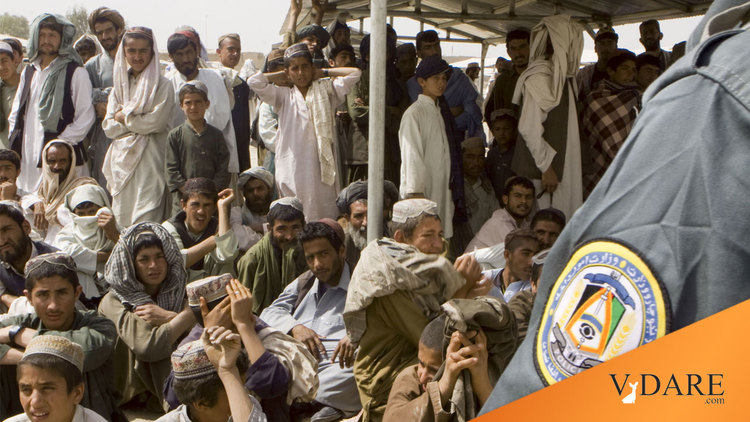 Why The Taliban Won: Sharia Is Democratic Will Of 99% Of Afghans

From the Pew Research Center eight years ago:

According to the survey findings, most Muslims believe sharia is the revealed word of God rather than a body of law developed by men based on the word of God. Muslims also tend to believe sharia has only one, true understanding, but this opinion is far from universal; in some countries, substantial minorities of Muslims believe sharia should be open to multiple interpretations. Religious commitment is closely linked to views about sharia: Muslims who pray several times a day are more likely to say sharia is the revealed word of God, to say that it has only one interpretation and to support the implementation of Islamic law in their country.

Although many Muslims around the world say sharia should be the law of the land in their country, the survey reveals divergent opinions about the precise application of Islamic law. Generally, supporters of sharia are most comfortable with its application in cases of family or property disputes. In most regions, fewer favor other specific aspects of sharia, such as cutting off the hands of thieves and executing people who convert from Islam to another faith. …

Acceptance of sharia as the revealed word of God is high across South Asia and most of the Middle East and North Africa. …

Across the countries surveyed in South Asia, majorities consistently say there is only one possible way to understand sharia. The proportion holding this view ranges from 67% in Afghanistan to 57% in Bangladesh. But more than a quarter of Muslims in Afghanistan (29%) and Bangladesh (38%) say sharia should be open to multiple interpretations.

Sharia as the Official Law of the Land

Support for making sharia the official law of the land varies significantly across the six major regions included in the study. In countries across South Asia, Southeast Asia, sub-Saharan Africa and the Middle East-North Africa region most favor making sharia their country’s official legal code. By contrast, only a minority of Muslims across Central Asia as well as Southern and Eastern Europe want sharia to be the official law of the land.

In South Asia, high percentages in all the countries surveyed support making sharia the official law, including nearly universal support among Muslims in Afghanistan (99%).

Okay, 99% of Muslims in Afghanistan want sharia to be the official law of the land, and 99.7% of Afghans are Muslims, so I’d say that in Afghanistan: Sharia = Democracy and Democracy = Sharia.

Further, Afghans don’t want some watered-down namby-pamby modern version of sharia fit for extolling in TED Talks and at Davos. The huge majority of Afghans want the Iron Age straight stuff complete with hand-chopping of thieves and stoning of adulterers:

… Penalty for Theft or Robbery

Among those who want sharia to be the law of the land, in 10 of 20 countries where there are adequate samples for analysis at least half say they support penalties such as whippings or cutting off the hands of thieves and robbers. In South Asia, Pakistani and Afghan Muslims clearly support hudud punishments (see Glossary). In both countries, more than eight-in-ten Muslims who favor making sharia the official law of the land also back these types of penalties for theft and robbery (88% in Pakistan and 81% in Afghanistan). By contrast, only half of Bangladeshis who favor sharia as the law of the land share this view.

In 10 of 20 countries where there are adequate samples for analysis, at least half of Muslims who favor making sharia the law of the land also favor stoning unfaithful spouses.

Some of the highest support for stoning is found in South Asia and the Middle East-North Africa region. In Pakistan (89%) and Afghanistan (85%), more than eight-in-ten Muslims who want Islamic law as their country’s official law say adulterers should be stoned, while nearly as many say the same in the Palestinian territories (84%) and Egypt (81%).

There’s no word from the survey on how many of those willing to cast the first stone are themselves without sin.

… Penalty for Converting to Another Faith

In Afghanistan, 79% favor executing ex-Muslim apostates. (This might help explain why only 0.3% of the population is not Muslim.)

… Muslims in Afghanistan stand out for the high percentage (88%) that says their laws follow sharia closely. Fewer Muslims in the other countries surveyed in South Asia believe their laws closely follow sharia (48% in Bangladesh and 41% in Pakistan).

Across the countries surveyed, many Muslims who say their laws do not follow sharia believe this is a bad thing. Muslims in South Asia are especially likely to express this sentiment, including at least eight-in-ten Muslims in Pakistan (91%), Afghanistan (84%) and Bangladesh (83%).

If I’m reading this correctly, only 12% of 16% or 1.92% of Afghan Muslims (which is 99.7% identical to all Afghans) think it’s not a bad thing that the theoretical full weight of sharia isn’t quite imposed on Afghanistan yet. So, 1.9% sounds like a pretty reasonable estimate of Afghanistan’s number of Moderate Muslims.

In other words, the USA leapt first into the Modern Muslim Nation-Building game not in some easy introductory setting like, say, Bosnia or Malaysia, but instead at the final, hardest level: Afghanistan, the human race’s most proudly knuckle-headed country.