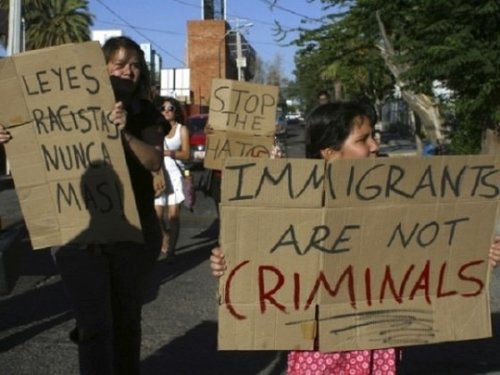 The intrepid Neil Munro, who deserves as much credit as anyone for outing Renee Ellmers (Cheap Labor Lobby- NC2) has moved on to disrupt the Nebraska Senate race with an attack on favorite Ben Sasse

A new campaign-trail pledge to vote against any immigration increases took center stage in the Nebraska GOP Senate primary race on Friday, when candidate Shane Osborne slammed his rival for not signing the pledge

The pledge dispute emerged the same day that The Daily Caller discovered that the university run by Ben Sasse, the other leading candidate in the three-person race, had requested visas to bring in several low-wage foreign graduates for jobs that could be performed by Americans.

This has flushed out the fact that Sasse in indeed shaky on the issue:

The pledge, from the Federation for American Immigration Reform (FAIR), asks candidates to vow to oppose amnesty, increases in legal immigration, and increases in the number of guest workers…

Sasse said he's still reviewing the pledge and has reached out to FAIR for a briefing about it. But in a statement articulating his views on immigration, he suggested that the pledge's plank on opposing increases in legal immigration may not align with his beliefs.

Nebraska is a frustrating situation. In 2012 Debbie Fischer who had defeated the GOP Establishment in the Primary with the most patriotic stance on immigration, provided the Republicans with their only gain in the Senate. Fischer subsequently honored her pledge!!! But the State GOP machine is owned by Cheap Labor Lobby as is the local MSM.

In fact Nebraska has a serious immigration problem, courtesy the Meatpacking Industry. Fremont Nebraska this year valiantly succeeded in defending local ordinances dealing with the impact of their greed. Sasse’s Midland University is located in Fremont, but he significantly dodged all involvement with the protracted campaign.

It is a pity Shane Osborne waited so long before raising this issue: the vote is tomorrow. I believe this was likely because all GOP candidates across the country have been told that doing so will result in General Election funds drying up.

Welcome to the Big Tent of the kinder, gentler GOP.