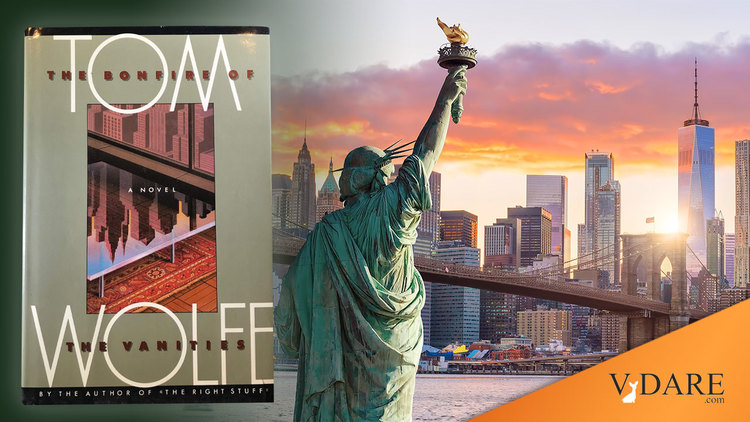 Sailer And Kirkpatrick On BONFIRE OF THE VANITIES: The Quintessential New York Novel—And The New Crusade For The West

During our VDARE.com Book Club discussion on The Bonfire of the Vanities, Steve Sailer argued that the book wasn’t the quintessential American novel. [Join the Book Club here, and listen to part of it below.]

However, it was the quintessential New York novel. Personally, I’d argue that New York, not Los Angeles or Washington, doesn’t quite define America but still represents it better than any other major city. Whatever is happening in New York is simply a reproduction on a grander scale of what’s happening around the country.

What’s most striking about The Bonfire of the Vanities, which was published in 1987, is how fresh it feels. The “Masters of the Universe” who emerged from the Conspicuous Consumption Era of the 1980s (when Donald Trump was arguably at his cultural and financial peak) have become a cultural archetype that is still with us, as seen by the continuing fascination with movies like The Wolf of Wall Street and American Psycho. The simmering racial politics that dominate the novel, including the mutually reinforcing power dynamic between huckster ethnic preachers and disingenuous media, have only intensified since the book was published. Sherman McCoy’s feeling that the Sword of Damocles of media destruction hanging over him a.k.a. doxing is something many Americans can relate to today. The only difference is that today media frenzies emerge much more quickly (and luckily, burn out that way too.)

All Americans, regardless of their beliefs, could be the next Sherman McCoy—defined by our worst moments, tortured for sins both real and imagined, and scapegoated for societal failures. If you’re white, you’re also at risk of being the Next Great White Defendant—like Derek Chauvin, a stand-in for the eternal enemy of white racism that we are told defines our country [The White Man on Trial, by Jared Taylor, American Renaissance, March 26, 2021]

This may make it sound like The Bonfire of the Vanities is grim reading. Far from it. I actually had to put it down to recover my poise because it was so funny.

Yet you can’t deny the undercurrent of, if not malice, of something almost evil in the book. The racial agitators, the scheming prosecutors, and the lying media all become a kind of all-powerful, invincible force that lurks behind all of American society. They are part of something they don’t really control, just something they are a part of. It’s also something fundamentally alien.

Sherman McCoy, after all, is a quintessential WASP—perhaps designed by Tom Wolfe to a represent the now absent American ruling class so ably described in Andrew Fraser’s The WASP Question. Like WASPs themselves, McCoy is not free of guilt. The tragic accident that destroys his life occurs because he’s having an affair. This sordid episode comes to define how he is perceived by the entire city—a representation of the way Old Stock English Americans abandoned their patrimony for easy living.

I suggested to Steve Sailer that the great American novel had already been written and it was The Great Gatsby. He made a good case that it was not and that exchange alone makes the podcast worth listening to. Yet now I realize a connection that seems so obvious in retrospect—as in Gatsby, the destroyed protagonist is not at the wheel when the fatal accident occurs. It’s the female companion. However, it’s Jay Gatsby and Sherman McCoy who take the fall.

In the case of “Jay Gatsby,” it’s the story of how Middle American Jimmy Gatz loses himself. He dedicates his noble, self-improving, adventurous, and all-American ethos to the pursuit of criminal wealth simply to try to buy into a ruling class that despises him. Yet, as Nick Carraway says, “You’re worth the whole damn bunch put together.”

In McCoy’s case, the Old Money that he represents is now in its twilight. His defeat shows the failure of a ruling class to adhere to duty. They enjoyed personal fantasies of being “Masters of the Universe” only to be confronted with the bitter reality that when it counts, they have already lost all power.

Still, there’s one significant change between the two protagonists. In the 1920s, the farm boy and war hero becomes a bootlegger forgotten by his criminal “friends” soon after his fall. Gatsby aligns himself with the new elite (as represented by Arnold Rothstein stand-in “Meyer Wolfsheim”) to break down the doors preventing access to the Old Money American elite. However, he can never truly be accepted by them. The Old Money still controls the keys to power and social acceptance, brushing the rest of us aside with their “vast carelessness,” in Nick Carraway’s phrase.

By the 1980s, McCoy’s connections and seeming power and wealth are as nothing before the rising tide of color that Tom Buchanan warned of back in Gatsby. McCoy is simply steamrolled by vast social forces.

It’s important to note that these forces, though they claim to speak in the name of the oppressed, don’t actually do much to help impoverished blacks. Henry Lamb, the black victim of the car accident in Bonfire Of The Vanities, dies basically forgotten. The media is more focused on pursuing McCoy from trial to trial in his new life as a professional defendant, just as it is now not interested in the black carnage following the Ferguson and George Floyd Hoaxes.

It’s a humiliation ritual, not just against McCoy, but the Old America he represents.

Meanwhile, the sad and sordid work of sending poor blacks and Hispanics to jail continues at the courthouse. It continues today, even as racial politics grow more ludicrous and extreme. And while it is tiresome to have to note that blacks are indeed the chief victims of black crime (there are plenty of whites who die at their hands, arguably because of incitement by the Main Stream Media), there’s something deeply sick about the Rev. Bacons of today jet-setting from media circus to media circus while American cities suffer from a record-setting crime-wave.

The Third World continues to seethe under the glittering wealth and Politically Correct platitudes on display from Woke Capital.

Still, there’s something like redemption for Sherman McCoy at the end of the novel. He notes that he has become a different person once he is in jail. His WASP connections mean nothing. He is not the son his father knew or the husband (albeit not a very good one) his wife married. He is something else. He is a “professional defendant” who has been stripped of assets but has regained some sense of pride and identity. He may be engaged in a losing battle, but he is at least willing to fight. Even a dog knows when to do that, as he notes.

Stoicism seems to be a repeating theme in Tom Wolfe’s work. There’s the stern adherence to duty and defiance of danger in The Right Stuff. There’s McCoy’s newfound aggressiveness at the end of the novel. There’s Conrad Hensley in A Man in Full, who discovers Stoicism when in prison.

These and other characters are caught by forces beyond their control, sometimes social, sometimes by natural disasters or equipment failures. Yet they meet their fate with dignity. Like Spengler’s Roman centurion, they eventually realize that their duty is to hold their post, no matter what happens.

That’s the hopeful reading to this tragicomic masterpiece. In the end, liberation comes from losing everything. At the beginning of the novel, Sherman McCoy is a despicable character. By the end, reborn, he’s something of a hero.

In The Metaphysics of War, Julius Evola wrote:

War breaks the routine of comfortable life, by means of its severe ordeals, it offers a transfiguring knowledge of life, life according to death. The moment the individual succeeds in living as a hero, even if it is the final moment of his earthly life, weighs infinitely more on the scale of values than a protected existence spent consuming monotonously among the trivialities of cities.

That’s true even in the greatest of cities, like New York. Today’s wars are of the spirit, not just of the battlefield.

Of course, as Evola would put it, the inner Holy War has always been the more important one. McCoy loses, but through his loss, he becomes ennobled, and in some way worthy of his more virile WASP ancestors who created this country.

It may seem today that Americans are losing everything about their country. Instead of seeing it is defeat, see it as liberation. See it as an opportunity for heroism—and the beginning of a new crusade for the West.

And if nothing else, appreciate the genius of Tom Wolfe, an American Original whose like we won’t see again [There Will Never Be Another Tom Wolfe, by Gregory Hood, American Renaissance, May 24, 2018].